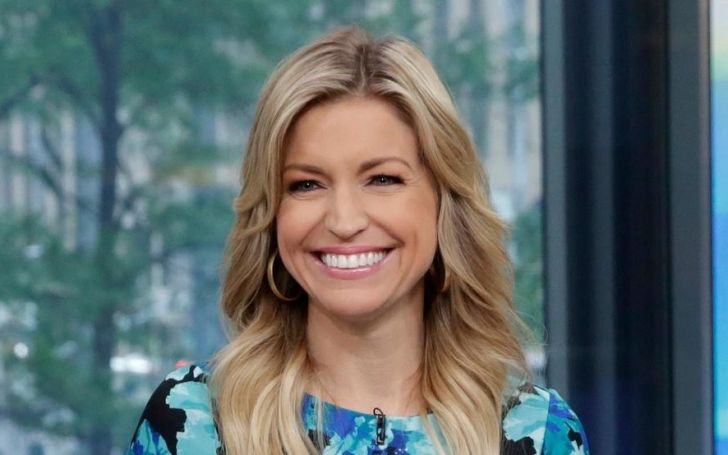 Conservative TV personality, Ainsley Earhardt is famous as the co-host of the show, Fox & Friends. In addition to her work in the media, she is also an author and so far authored a few award-winning books.

While talking about her personal life, she has been married twice. Although both of her married life didn’t work out, she still remains grateful. Above all, taking care of her daughter is Ainsley’s topmost priority and in fact, she loves spending time with her child.

Today let’s take a closer look at the life of Ainsley Earhardt and find out some interesting facts about her. We will also discuss what kind of relationship does she have with another Conservative commentator, Sean Hannity.

Ainsley was born on September 20th, 1976, in Spartanburg, South Carolina. She is the second daughter of her mom Dale and dad, Wayne Earhardt. Ainsley belongs to German ancestry and is of Caucasian ethnicity.

Afterward, she joined the Florida State University. She later on transferred to the University of South Carolina from where graduated with a Bachelors degree in Journalism.

Ainsley grew up with two siblings

She has two siblings, one brother, and one sister. Her brother’s name is Trent. He is a married man and a mother of two children, one son, and one girl. He works as a Medical Representative in the state of South Carolina.

Apart from her brother, Ainsley also has a sister named Elise. All three of Earhardt’s siblings are quite close to each other. They share a lot of pictures with each other on Facebook.

They are also close to their parents. When their mom Dale had a stroke back in 2018, and three siblings banded together and took care of their mother.

While she was still studying at her college, Ainsley started working at WLTX, a CBS station in Columbia. While working for the station, she also went to New York City after the September 11 attack to cover a story where the middle school students from South Carolina raised a million dollars for the firefighters involved in the rescue mission.

Subsequently, a few years later she relocated to San Antonio, Texas where she became the anchor of the show, KENS-TV. She worked in the South-Central state for a couple of years before moving to New York City.

She is famous for hosting Fox and Friends

In the year 2007, she moved to New York City and started working for the Fox News Channel. At the time, she started working in the Politics department which according to her back then she had no knowledge of.

Some times later, she was hosting her own segment on Hannity titled, Ainsley Across America. In addition to that, she also c0-hosted several other shows as well including Fox and Friends Weekend, All-American New Year’s Eve. She was also a panelist for Greg Gutfeld‘s show, Red Eye.

Above all, since 2016, she has been working as the co-host for the show, Fox and Friends. She hosts the show alongside Jillian Mele, Pete Hegseth, Steve Doocy among many others.

She has been married two times

The veteran TV personality has had two marriages in her lifetime, first with Kevin McKinney and second with Will Proctor. Let’s talk about her marriages one by one.

From 2005 to 2009, she was married to Kevin McKinney. The pair exchanged vows in an intimate ceremony on April 9th, 2005. The ceremony took place at the First Presbyterian Church in Columbia, Texas. Both Kevin and Ainsley are from Texas. After their wedding, the duo went to Turks and Caicos Islands for their honeymoon.

Unfortunately, their marital relationship didn’t last and they divorced a few years later in 2009.

After divorcing from Kevin, the Fox News reporter found love again. She tied the knot with former football Quarterback turned investment businessman Will Proctor. They married in a civil ceremony on October 13th, 2012. At the wedding, several of the pair’s friends and relatives were in attendance.

Ainsley welcomed a daughter with her second husband Will

On November 6th, 2015, Ainsley gave birth to her first and only child, a girl. She and her then-husband Will named their firstborn Hayden Dubose Proctor.

Hayden is quite close to her mom and spends a lot of precious moments with her. In many of Ainsley’s posts with Hayden, she often writes about how she will miss these moments once Hayden becomes an adult.

Ainsley and her ex-husband Will shares joint custody of their daughter, though she spent the major portion of her time with her mom. The mother and daughter live in New York City. As of now, Hayden has started going to school.

Divorce between Ainsley and Will: Was his infidelity the reason?

In October 2018, Will and Ainsley decided to end their marriage. Ainsley first announced her separation from Will through a statement via a Fox News spokesperson. The statement read,

“After much prayer and careful consideration, Will and I have separated.”

She further added, “I am grateful to Fox for their support and allowing me to spend all day, everyday after the morning show with my child.”

At the time when Ainsley announced the separation, she didn’t mention the reason behind their divorce. However, later on, it was rumored that they are divorcing because Will was unfaithful. He allegedly cheated on her with one of her closest friends, a few years ago and reportedly there’s even evidence to back up the claim.

Nevertheless, Will denied all the loose talks and claimed he was never unfaithful. He stated, “There is not one ounce of truth to the allegations that I had an affair.”

He also adds, “I am disappointed that this private matter has become public. I remain focused on and committed to being the best dad, and maintaining a friendship with my wife even though she has decided to move on.”

Besides, after their separation announcement, Will was the one to file for divorce. He filed the divorce papers in New York City. At that time, he was working in the finance department of Neuberger Berman.

Ainsley Earhardt and Sean Hannity rumored to be dating

Since 2020, there’s a rumor going on that Ainsley is dating Fox News conservative commentator Sean Hannity. Rumors about their affair had been swirling around since 2019, right when both of them divorced their respective partners. While Sean divorced his wife of over 15-years in 2019, Ainsley separated from her second husband, Will.

Moreover, both Sean and Ainsley reportedly arrived together at the wedding of their colleagues, Pete Hegseth and Jennifer Rauchet. In an article written by Gabriel Sherman for Vanity Fair states that several sources have claimed Sean and Ainsley are indeed dating.

Nonetheless, both of them have kept their silence on the matter. They are yet to open up about the real state of their romance. What’s more interesting is that despite all the evidence backing the claim, Ainsley has something else to say. Through a Fox News spokesperson, Ainsley said that she is not dating anyone.

Well, only time will tell whether the so-called Fox News’s First Couple is a thing or not.