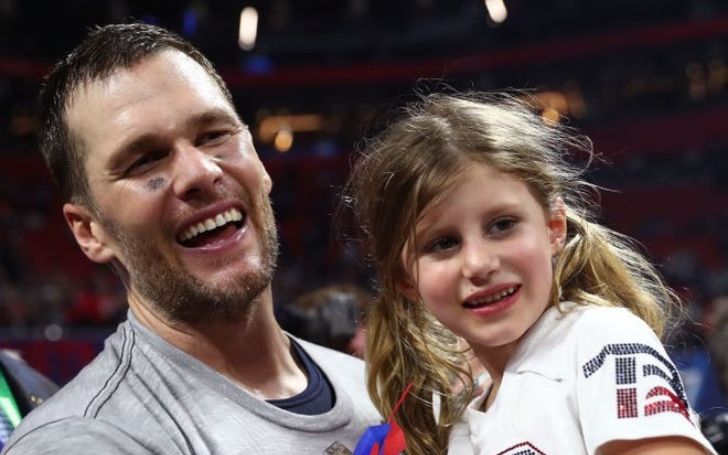 Vivian Lake Brady is the daughter of NFL superstar, Tom Brady and his equally famous model-wife, Gisele Bundchen. She is the second child of Tampa Bay Buccaneers, Quarter Back, Brady, and his wife Bundchen.

In addition to being one of the most liked footballers, Brady is also one of the most talked-about fathers in the NFL. In the last few years, he has created some endearing moments bringing his daughter, Vivian on the pitch, every now and again.

Things possibly cannot get more heavenly for Brady and Bundchen with each of them doing significantly better on their respective careers. And their children to them have been the most valuable pieces of their happiness. So take a look at one from the brood, Vivian Lake Brady. Is she really the favorite of Tom and Gisele? How her life has been till now being a celebrity kid, and more.

Vivian Lake Brady was born on Wednesday, December 5, 2012, in Boston. Her parents Gisele and Brady gave birth to her at home. At the time, Brady and Bundchen were in the third year of their marriage.

Some moments after her birth, her mother, the supermodel, Gisele Bundchen, on her Facebook wrote,

“We feel so lucky to have been able to experience the miracle of birth once again and are forever grateful for the opportunity to be the parents of another little angel. Vivian Lake was born at home on Dec. 5. She is healthy and full of life. Thank you all for your support and well wishes.”

Though alongside the caption, the former Victoria Secret Angel would only show her tiny little right hand. Bundchen didn’t show the clear-cut imagery of her little girl until Feb 9, 2013.

Paternal wise, Vivian is of Irish, German, Norwegian, Polish, and Swedish descent. Her maternal ancestry, on the other hand, dates back to German people of Rhineland-Palatinate, Baden-Württemberg, Saarland, Hesse, and Alsace-Lorraine, France.

Vivian is the younger sister of Benjamin Rein and the half-brother, John Edward Thomas Moynahan or Jack. During the time of Vivi’s birth, Benjamin was 3 while John was 5.

Vivian’s half-brother, John is Brady’s son from his previous relationship with actress Bridget Moynahan. By the time of his birth, his father had already started dating the 2012 Forbes top-earning model.

Jack who was born in August 2007 is extremely close to his stepmother, Gisele. In fact, Bündchen insists he calls her bonus mom instead of using the word step.

The Rio Grande do Sul-born fashion icon in an interview said,

Despite their split, Tom Brady and Bridget Moynahan are amicable and have been co-parenting Jack very well. Brady never misses wishing Moynahan a happy birthday and happy Mother’s Day regularly on his Instagram account.

As for her other brother, Benjamin Brady, the first-ever child of Brady and Bundchen was born in Boston in December of 2009. Interestingly, Bundchen and the 2000 NFL draftee also had him at home in a bathtub. Lake’s birthday is only three days before Benjamin’s.

All of Vivi’s siblings, including Vivian herself, have the provision of homeschooling education.

Her Mother Gisele Bundchen Talks To Her In Portuguese

Being from Brazil, Bündchen reportedly speaks to Vivian and her brothers in her native language, Portuguese. While they allegedly understand the language, they do not yet have a fair command over their mother tongue.

Vivian Is Not Allowed To Have Junk

Apparently, the Brady family has a strict rule of no-junk food in their household – even for their children.

Though Vivi and her brothers do have the quota of having pizza every now and again.

The Buccaneers no 12 says his daughter, Vivi steals his heart every time he sees her.

Brady admits as his first and only daughter, he has a soft spot for Vivan and spoils her, though he loves all of his children equally.

“I let my daughter do basically anything she wants, which is a little bit of a problem in the house… the boys I’m definitely tougher on… she knows exactly what to say to get her dad to do exactly what she wants,”

Although her father is a true sports icon in every manner, Vivian apparently isn’t that into sports and while it may be too early to assume it, she is also not joining sports for her career.

As a matter of fact, she has been reported to have less excitement compared to her brother whenever their father is on the field. At the age of nine, she has not yet taken much of an interest in sports. This is despite the fact she likely has a genetic predisposition for them. She may not love football, but she does love to cheer her dad on during the Superbowl.

Also, she often steals the show every time Brady brings her to the field post his match victories. Not to mention, her picture with her father right after he won the Superbowl LIII went like wildfire over the internet from the moment it hit the internet.

Nonetheless, some of the things she does for entertainment include going to the beach, baking, yoga with her mom, and playing outside with her brother and half-brother.

She reportedly also talks quite a bit about modeling and fashion with her mother.

A Host Once Called Her “Annoying”

In Jan 2018, the host of Boston local radio station WEEI, Alex Reimer, referred to Vivian as an “annoying little pissant” while discussing a scene from Brady’s “Tom vs Time” Facebook documentary.

The program runner was bold enough to say it while interviewing Brady, himself. Vivi’s father abruptly ended his radio interview with WEEI but not before addressing Reimer’s comments saying he was disappointed after what he heard.

Soon Brady’s fans and even the non-football watchers weighed in on the aforesaid disparaging comment about Brady’s little girl.

Joining the long list of defenders was Robert Kraft, the New England Patriots owner who didn’t say much, but his message was clear: he stood with Tom Brady.

“I happen to know the child. She’s awesome, vivacious, loving, terrific. You don’t talk about someone’s (5-)year old child, no matter who the adult is,”

Vivi’s father, Brady undoubtedly is once in a lifetime star in the NFL world. In addition to records, he has also on numerous occasions made headlines for signing contracts worth tens of millions of dollars.

When he committed to play for Tampa Bay Buccaneers in 2020, the multiple-time Superbowl MVP winner landed an agreement valued at over $50million with a further nine million dollars in incentives.

As per multiple analysts, for the last fifteen years or so Vivian’s dad has been netting amounts no less than $20million. With seven Superbowl titles and seven rings, it shouldn’t be a surprise to know the father of three has a net worth of over $250million.

The real deal-breaker, however, is Vivian’s model turned entrepreneur mother who, shockingly to many people, has a wealth standing at $400 million.

The Brazilian beauty gained the majority of the aforesaid sum thanks to her extremely successful modeling career spanning over two decades.

With all the aforementioned figures, it should go without saying money isn’t going to be much of an issue for Bundchen and Brady’s daughter or even their sons for years to come.