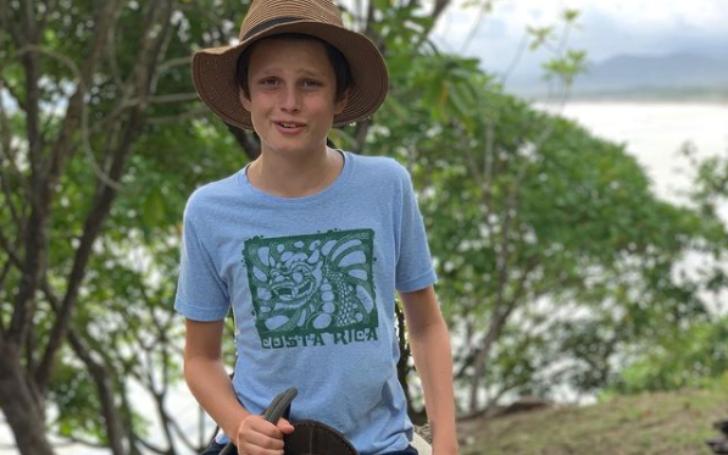 John Edward Thomas Moynahan is the first child of legendary NFL quarterback, Tom Brady. The retired football player shares John with his former girlfriend, Kathryn Bridget Moynahan. The former flames were in a relationship for a few years before separating.

Growing up, John Edward didn’t have a father-like figure. Although Tom and Kathryn shared his joint custody, going back and forth with each parent takes a toll. John has since grown up and fans are curious if he will follow in his father’s footsteps?

Well, today we’re going to explore the life of this star kid and find out about what kind of relationship does he shares with his step-mom, Gisele Bundchen.

John Edward aka Jack was born on August 22nd, 2007, at Saint John’s Health Center in Santa Monica, CA. He is the one and only child between retired NFL star Tom Brady and Blue Bloods actress, Kathryn Moynahan.

John belongs to the Caucasian ethnicity and traces his roots back to Ireland, German, Norwegian, Polish, and Swedish ancestry.

Both of John’s parents are quite famous in their respective fields. This is why since his birth, he gained a lot of attention, many times unwanted.

At the time when Kathryn was pregnant with John, she told PEOPLE that the paparazzi had made her life miserable. She stated, “I would have cars following me, and men hiding in the bushes outside my house.”

He spent a major portion of his life with his mother. Though both Tom and Kathryn share his joint custody, he grew up with his mom.

Many tabloids claim that Kathryn has still not forgiven Tom. And we can’t blame her anyway. Who in the right mind would move on in a couple of days and that too when your ex is pregnant? Looking at you Brady!

Like many celebrity children, Tom Brady’s son John is currently homeschooled. He was previously going to a local school nearby to where he lives. Homeschooling is a growing trend in the celebrity world.

John has two half-siblings: Shares a terrific relationship with his step-mom

After his parents separated, John’s dad moved on with Brazillian supermodel, Gisele Bundchen. From their union, the pair welcomed two children, a boy, and a girl.

Tom and Gisele welcomed their first child, Benjamin Rein, in December 2009. Subsequently, a few years later in December 2012, they became a parent to Vivian Lake.

All three of Brady’s children are really close to each other. What’s more, John’s step-mom, Gisele loves him like her own. The supermodel usually shares photos of her two kids along with her stepson.

Goes on to show that Tom has really held his family together!

Whenever the Brady family is going for an exotic vacation or just on a regular stroll in the park, all five of them stick together as one family.

It’s a dream for every sports star that their offspring also become an athlete. Similarly, Tom is also lucky in this aspect as his oldest has shown a keen interest in sports. In an interview with Men’s Health, while talking about his family, Brady said,

“Jack is just like me—he holds a lot in. Benny lets it all out. Vivi, she doesn’t care. They’re going to be their own selves, not who you want them to be.”

Aside from that, he also mentioned Jack is following in his footstep. He stated,

“Jack loves sports. He wants to try hard, and he never wants to disappoint his dad. That was me. I’d wake up early on weekends to do stuff with my dad. That’s why I didn’t party a lot. If Dad wanted to golf, I wanted to be there with him. And if I ever missed those things, it would crush me.”

Well, it is clear Jack definitely follows in his dad’s footsteps. In the coming year, don’t be surprised if Jack becomes a big name in college football. It is in his blood and what’s more, he has been trained by the one and only Tom Brady.

On the other hand, John’s two half-siblings, as of now, are not into sports. In the same interview, Tom revealed that Benjamin often refrains from doing what his father asks him to do. Tom said,

“When Benny came along, I thought he would be just like Jack. So I was like, ‘C’mon, let’s do this.’ And he was like, ‘Nope.’ And I was like, ‘What? No, do this!’ And Gisele kept saying to me, ‘Would you effing understand that your son is different?”

Interestingly, Benny loves playing video games and watch movies. He is a great fan of Dwayne ‘The Rock’ Johnson.

Yes, you read it right. John Edward is not keen on becoming an NFL star like his dad. Instead, he wants to become a soccer player, his mom told in a sitdown on Live with Kelly in 2017. In the interview, she vividly talked about her son’s interest in winning trophies as a pro-athlete, not only as a football star.

“I think right now he wants to be a professional soccer player. Though after the Olympics he’s like, ‘I think I’m going to win a gold in swimming. Then it was Michael Phelps. So I think he just likes awards.”

Well, the drive to win definitely runs in the Brady family. Since both of John’s parents have mentioned he is interested in sports, we’re guessing he will really become a world-class athlete. After all, it’s in his blood.

It was in late 2003 when a mutual friend of Tom and Bridget set them up on a date. Back then, both of them were making incredible feats in their respective career.

While Brady had already won a few Superbowl titles, Bridget was also working in big movies and series. Safe to say, they were a match made in heaven.

However, their relationship was short-lived. After dating for a few years, they called it quits in 2006. News of their breakup first came in December of 2006 when a rep for Moynahan announced the bad news. At the time, the representative claimed the pair went their separate ways several weeks ago.

The reason for their unfortunate split never came out. Nevertheless, many sources, to this day, claim it was due to Tom’s affection towards the supermodel, Gisele that led to their separation.

These speculations started when Tom didn’t waste any time and moved on with Bundchen, in the same month as the news of his break-up with Bridget came out.

Right after Brady and Gisele started dating, news of Bridget’s pregnancy with Tom’s child came out. According to reports, Tom didn’t spend a whole lot of time with his baby momma during her pregnancy journey. Maybe this is why she didn’t even allow him inside the operation theatre while she was in labor.

Tom was only allowed after John Edward Thomas Moynahan came into this world but that too for a short while. An insider affirmed that Bridget didn’t want to meet her ex-boyfriend. What’s more, she even gave her newborn her last name, which really tells something about the type of relationship she had with Tom.

Be that as it may, both of them share the joint custody of the teenager and have nothing but his best interest in mind.

Who is Tom Brady wife? Facts Surrounding his Marital Relationship