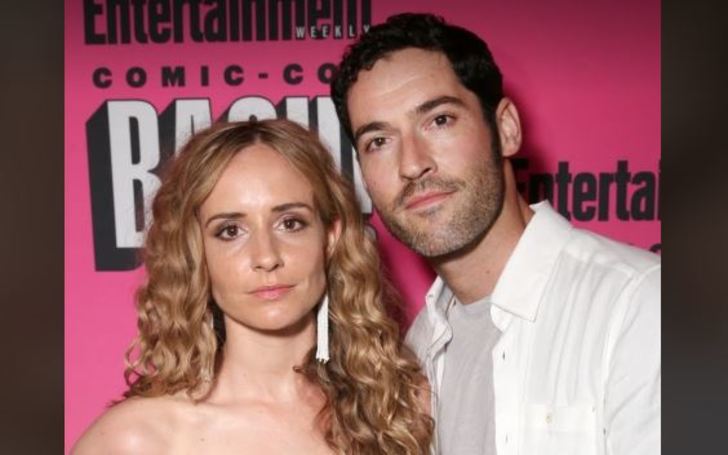 Meaghan Oppenheimer or Meaghan Reed Oppenheimer is a writer, showrunner, producer, and actress. As an actress, she’s had credits in short films and TV movies, like LoveFinder and Hot Mess. She is also famous as Netflix’s Lucifer actor, Tom Ellis.

Meaghan’s husband, Tom became a sleeping hit celebrity in the midst of the 2020 global pandemic when he gained mounting attention for his role in Lucifer. Off the screen, he couldn’t have chosen his life partner other than a film professional.

Oppenheimer indeed is well familiar with Hollywood but unlike her husband, she mostly does the work behind the project. Although her husband might steal the show on most red carpets and interviews, she herself is quite a bonafide cinema worker. Read all about her career in Hollywood, her upcoming projects, her relationship with Tom Ellis; full disclosure, and much more.

Meaghan Oppenheimer Is A Tulsan

Meaghan was born on March 28, 1986 (age 35 years), in Tulsa, Oklahoma. She is the daughter of Reed Oppenheimer (Yale University) and Gabrielle Oppenheimer (New York University). Her father is a former charter member of The Hunger Project, the founding chairman of the Grameen Foundation USA, and a board member of Chiapas International. As of present, Reed is currently a board member of Trees for Life and the Jane Goodall Foundation.

Meaghan has one sister, Sophie, and two brothers, Eric, and Luke.

A former child actor, Oppenheimer began her career working in various regional theatre productions and television shows. She studied at Holland Hall (graduating in 2005), and then at New York University Tisch School of the Arts in 2009. Ms. Ellis has a Bachelor’s degree in Theatre from NYU’s Tisch School of the Arts with a specialty in Creative Writing.

Meaghan is alleged of Ashkenazi Jewish, as well as of Scottish and English ancestry.

Is She Related To Robert J Oppenheimer?

While Meaghan’s name certainly raises the suspicion, there, however, hasn’t been any teasing to this query whatsoever. In a way that would have given a credible conclusion whether Tom’s wife actually comes from the lineage of the famous theoretical physicist, Robert J Oppenheimer. There nevertheless lies some reports; an analysis of which suggest, Meaghan might not be of physicist’s heritage.

She Was A Child Actress

Ellis’ wife, Meaghan first appeared as a child actress in the pilot for the Disney series Even Stevens. The same year, she also appeared in a short movie, Hot Mess. She then portrayed the character of Drew Walker in the TV series, stalkTalk. In 2011, Meaghan starred in a TV movie, LoveFinder as Lexi. Her other acting credits include the shows How To Marry A Billionaire as Bree and another short video, LoveFinder: The Virals as Lexi.

She later moved to Los Angeles to begin her screenwriting career.

Meaghan Oppenheimer’s Work Has Entered Into A Prestigious List

While in L.A., she wrote The Remains. The story is a dark comedy narrating a group of friends who return to their New York suburb to spread the ashes of a friend who recently committed suicide. In 2013, Meaghan’s The Remains won the attention of The Black List. Her story got into an annual list of unproduced screenplays. They are generally selected by some Hollywood big critics.

The Black List achievement turns out to be quite a big thing; As such other screenplays that have managed to make their way into roll are films like There Will Be Blood and The Wolf of Wall Street. The Black List win helped Ellis’ spouse push into wider recognition.

She Is Mostly A Writer And Producer

So far, she has been the producer of three series, Broken (pilot), Queen America, and Tell Me Lies. She also wrote the 2015 Jack Effron starrer, We Are Your Friends, and the TV show, Fear The Walking Dead.

Oppenheimer also created the Facebook Watch series “Queen America,” — a dark comedy about the world of pageants, starring Catherine Zeta-Jones. In the comedy series, Zeta-Jones appears as a pageant coach who is tapped to train a newbie pageant contestant. In addition to creating, Tom’s wife, Oppenheimer also served as a writer and executive producer.

She made her last credited screen appearance in 2012’s Love Finder: The Virals. After that, she went on to focus on her writing.

At their wedding, the bride wore a long-sleeved white dress by Naeem Khan. Among the attendees were Tom’s Lucifer castmates, along with showrunner Ildy Modrovich. Scottish actor James McAvoy and Tom’s co-star Lesley Ann Brandt also attended the ceremony.

When their fans asked them for their wedding gifts, Meaghan and her then-fiance urged them to donate to Planned Parenthood instead of gifts. They suggested their followers do so in the wake of the heavy abortion restrictions enacted in several states in America.

“Thank you to all the people that have been asking about wedding gifts or charitable donations for my upcoming nuptials with @MoppyOpps that is so kind. If you would make a donation to @PPFA #plannedparenthood we would be very grateful.”

When Did Meaghan And Tom Start Their Relationship?

They had started dating in 2015 with their first meeting in March the same year. The Wales-born husband of Oppenheimer proposed to her in March 2017. Meaghan shared the news of her engagement on March 27, 2017, in an Instagram post with the caption:

‘Does this ring make me look fat??’

Her actor husband was previously married to EastEnders actress – and former co-star – Tamzin Outhwaite. Tom and his ex-wife, Tamzin were together for nine years, marrying in 2006, and have two daughters together, Marnie and Florence.

The reason for Tom and Tamzin’s divorce was the former’s infidelity which the actor himself admitted. The Miranda actor later admitted having a one-night stand while filming “Gothica” in the US. Additionally, several media reports claimed that Ellis also had a brief affair with Australian actress Emilie de Ravin.

Before Outhwaite, Tom had a relationship with another woman whose name though is yet to be disclosed. Together, they had a daughter, Nora.

In Sep 2021, Meaghan’s husband revealed the words, “I love you” slipped out by mistake in the early days of their relationship. Tom, however, seemingly did not have any regrets as he and his writer wife realized they were meant to be together.

When asked if he had ever said the magic three words to a significant other and not meant it, the Welsh international admitted he indeed did so.

“I actually said it to my wife Meaghan on our second date – it just slipped out,”

The Cardiff native confessed to the Guardian. Tom, nonetheless added the sayings turned into reality eventually.

With Her Siblings, She Runs A Non-profit Organization, The Reed Jules Oppenheimer Foundation

In 2012, Meaghan’s family launched The Reed Jules Oppenheimer Foundation. Her parents had run several other charity organizations before this.

The organization supports poverty alleviation initiatives within the United States. Additionally, it also operates in other countries such as India, Kenya, Mexico, Tanzania, and Uganda.

What’s more, Meaghan can often be noted raising funds through her Facebook for stray cats and animals. On her last birthday, the writer/producer urged people to donate to Stray Cat Alliance – Building a no-kill nation, one stray at a time.

Meaghan Oppenheimer And Her Husband Received A Mysterious Package

In May 2021, Meghan and her actor husband, Tom Ellis received a mysterious package at their Los Angeles home. The couple later filed a complaint with the police.

According to TMZ, law enforcement sources revealed some unidentified sender sent Tom and his wife, Meaghan a “glitter package” to their shared home in Los Angeles. The couple reported the delivery to be creepy and filed a report to the Los Angeles Police Department.

Apparently, it was only Meaghan to whom the mysterious package was addressed. Sometimes after the complaint, the LAPD’s Threat Management division reported that they had a lead on a suspect. However, the case has seen no further development since.

Is She As Rich As Her Husband, Tom Ellis?

The case where Meaghan Oppenheimer possesses more net worth than her global icon husband, Tom seems highly unlikely. Ellis is certainly a millionaire with his fortune from acting estimated at around $6million. On the other hand, it is yet to be revealed how deep are his wife’s pockets. In any case, the question might be of hardly an issue.

Other Facts About Meaghan Oppenheimer