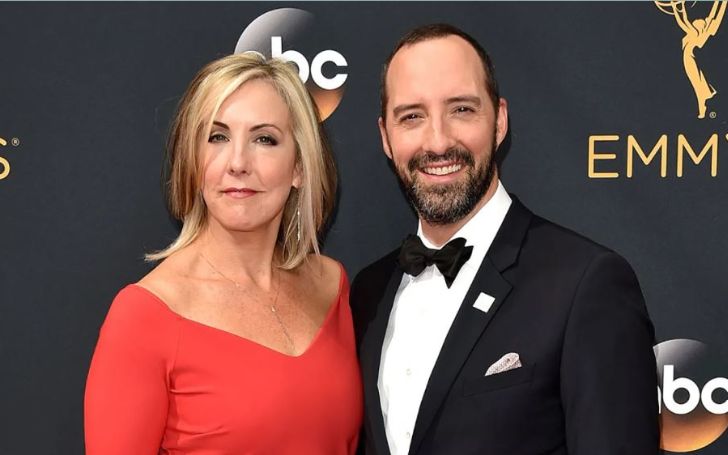 Martel Thompson is an American professional make-up artist and media personality. She has worked in several TV shows including Saturday Night Live. She also won a Daytime Emmy Award for Outstanding Makeup For A Drama Series for her work in All My Children.

But, on top of that, Thompson is better known as the wife of Arrested Development actor Tony Hale. Her husband is popular for Buster Bluth, Veep, Toy Story 4, and many more. Besides, as for their marriage, Thompson and her hubby Hale are married since 2003 and also share a daughter together.

What is Martel Thompson’s Age? Her Early Life and Ethnicity

The celebrity spouse Martha Telfair Thompson was born on 18th July 1965 in the United States of America. She is 56 years old as of 2022.

Besides, Thompson has an American nationality and belongs to the Caucasian ethnic ancestry. However, other early details including her schooling, parents, and more are still missing from the media.

Who is Tony Hale’s Wife Martel Thompson? She Won An Emmy Award For Outstanding Makeup

The 56-year-old Thompson began her professional career as a makeup artist in the 1998 comedy-drama series Origin of the Species.

Over the course of time, Martel has worked in the makeup department on several on-screen projects. Her most notable credits include The Florentine, Man on the Moon, Big Money Hustlas, Chasing the Dragon, The Royal Tenenbaums, and many more.

From 1996 to 2004, Martel worked as a makeup artist in a total of 160 episodes for the American late-night live TV sketch comedy show Saturday Night Live.

Similarly, the skilled make-up artist won the Daytime Emmy Award for Outstanding Makeup For A Drama Series for the legendary soap opera All My Children in 2003. This is one of her big career achievements.

Moreover, Thompson has worked with a number of A-list celebrities throughout her career of over 2 decades.

Similarly, Hale also won Screen Actors Guild Awards for the same show in 2017 for Outstanding Ensemble in a Comedy Series.

During his second Emmy award nomination, Tony was visiting his family in Alabama.

Back in 2019, Tony talked about his wedding proposal to his then-girlfriend Martel Thompson during an interview on Conan’s talk show.

As per him, the Arrested Development actor themed his whole proposal around the play Stones in His Pockets. It is the show which the actor and his then-girlfriend watched on their first date.

For the proposal, Hale flew to Ireland to the place where the play was set in order to pop the question. As per his planning, the ring in his pocket would resonate with the stone in the play.

Thankfully, every bit of his planning worked and Martel accepted his proposal. However, after a while, Tony found out that the play on which he based his wedding proposal actually revolved around suicide and the stones in the show were what the character used to drown himself.

He further added that, after he realized the true meaning, he called his wife and asked if she found the proposal weird. He said,

“I called Martel after I saw the play, and I was like, Martel when I took you to Ireland and I centered our engagement around the play ‘Stones on his Pockets’, did you think that was kind of odd. She said, Yeah, but I didn’t want to ruin your buzz. I kept on thinking, ‘Am I the stone that’s going to drag you to your death and suffocate your life.”

Martel and her future-husband Tony first met during a Bible study group meeting in New York City, New York. After dating for a while, Tony popped the question during a romantic yet dark proposal back in Ireland.

As for their marriage, the couple exchanged their wedding vows on 24th May 2003 in presence of their family and friends. They are leading a blissful matrimonial relationship ever since.

Back in 2019, Martel Thompson’s husband Tony explained his life-partner as his “lifeline” in an exclusive talk with Us Weekly. He also described their conjugal life as “a special relationship.”

Martel is The Mother of One Kid With Her Spouse

The couple who has been married for several years is also the proud parents of one child. Tony Hale’s wife Martel Thompson gave birth to their daughter Loy Ann Hale on 24th Feb 2006. She weighed 6 pounds and 4 ounces at the time of her birth.

At present, Martel resides in Los Angeles with her spouse and kid.

Is Thompson As Rich As Her Husband?

According to various sources, Thompson’s net worth is estimated at around $2 million in 2022. She earns her fortune from her successful career as a professional makeup artist.

On the other hand, her husband Tony has a net worth of $9 million as of 2022. He earns his wealth from his career as a comedian and actor.

The family of three currently resides in their 3-bedroom Studio City ranch house. They previously owned a traditional house in Los Feliz, Los Angeles worth $1.6 million.