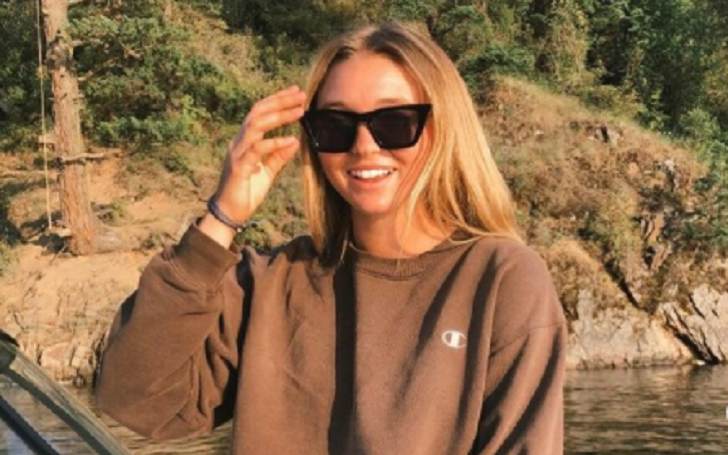 Emma Gretzky is the daughter of Wayne Gretzky, a former Canadian ice hockey player nicknamed “The Great One.” He set a number of records in NHL during his extensive career that spanned over two decades.

On the other hand, Emma’s mother Janet Jones has a good career in the show business. The iconic couple who married in an extravagant ceremony is in a blissful marital relationship for over three decades now. Besides, being the daughter of well-known public figures, Emma is also known for her acting in the 2013 movie, Palo Alto.

Many of Wayne’s fans have wondered if Emma also wanted to become an athlete like her father or she wanted to go with some other profession. So, is Emma involved in any kind of sports? What does she do at present? You can learn about everything about Emma, including her siblings, high school, and more. Read it through.

Born to an athlete father, Gretzky also developed an interest in sports as we speculated. She is trying to build a career in tennis. Emma started playing tennis at the age of twelve and a half, however, her prowess in the game developed exponentially after she joined Westlake Village School.

Talking about her interest in tennis, her father once told Vc Star,

“Emma started a little bit late. She didn’t start playing until she was 12 and a half. But it’s a marathon, not a sprint. John McEnroe always says, you can play tennis for a long time, you don’t have to be great at 16.”

Besides, Wayne also talked about his and his wife Janet’s goal for their daughter Emma in the conversation. There he said,

“as parents, our goal for Emma is to love it and keep working hard at it, because it’s a huge commitment. Tennis is three, four, five hours a day of cardio. It’s a little bit different and unique.”

In mid-2016, Gretzky started her practice under the tennis director, Jeff Urie. The promising player then went on to win the Spokane Summer Classic Girl’s 14 Advanced Consolation Draw.

Additionally, Emma has played for Oaks Christian. She participated in a junior tennis tournament held in Northridge in early late 2019.

Emma grew up along with her four older siblings; three brothers and one sister. Her brother Ty Gretzky initially played hockey at the prestigious Shattuck-St. Mary School in Minnesota. He later came back to Oaks Christian and started playing golf.

Her other brother Trevor played baseball and football for the Lions. Moreover, Emma’s brother Tristan played golf for Oaks Christian and also led his school team to the Marmonte league boys golf title. He now plays for Pepperdine University.

Their retired father put his point of view on children’s interest to pursue a career,

“As parents, we decided to let our kids choose what they wanted to do. Each and every child has their love and their interest.”

Besides, her sister Paulina Gretzky is a model. Paulina is currently in a relationship with Dustin Johnson with whom she has been engaged since 2013. Moreover, the couple also has two children, sons Tatum Gretzky Johnson, and River Jones Johnson together.

Gretzky was born Emma Marie Gretzky on March 28, 2003, in California, the United States of America. She attracted huge attention after her 13th birthday celebration with the Canadian pop star Justin Bieber. He was performing at his show at the MGM Grand Garden Arena when Emma’s parents surprised her with a special meet-and-greet with the artist on the occasion of her birthday.

On 15th March 2016, Emma’s mom also shared an Instagram photo of her daughter and Bieber marking her birthday. She is now 19-year-old.

Meanwhile, on March 28, 2021, Gretzky’s mother Janet took to her Instagram wishing her youngest child on her 18th birthday. The proud mama shared a couple of photos of Emma writing “Wishing my baby girl the youngest of our 5 children Emelia Marie Jones Gretzky is 18 today !!” alongside the post.

Meanwhile, her father, Wayne is not so much active on social sites, so we rarely see him posting photos on Instagram and Facebook.

Wayne Gretzky married Janet Jones on July 16, 1988. The two walked down the aisle in a lavish wedding ceremony dubbed ‘Canada’s Royal Wedding.’ The groom opted for a black tuxedo with tails and the bride wore a $35,000 white, low-cut dress with hand-beaded crystals.

Their extravagant event was attended by seven hundred guests. A long list of wedding attendants included several Canadian politicians, actors, and sports stars. Their traditional ceremony was conducted in a Catholic church Jones Methodist. The couple and guest went to the Westin Hotel in downtown Edmonton for the reception.

Talking about their first meeting, the two came across five years before their nuptials. As a matter of fact, both of them were engaged to other partners at the time they met. While Jones was engaged to tennis star Vitas Gerulaitis, Gretzky was engaged to Edmonton singer Vikki Moss.

But, they wouldn’t start dating until the future husband and wife came across again at an NBA game in 1987. After six months of dating, Wayne proposed to his girlfriend.

Besides being a tennis player, Wayne Gretzky’s daughter Emma also has appeared in the 2013 drama movie, Palo Alto. She shared the screen along with Emma Roberts and James Franco.

Who is Emma Gretzky Boyfriend?

Emma was once in a relationship with her boyfriend Luc Yorkison for some time now. Not much about Luc is known, however, we know for sure that he is a Los Angeles native. Emma and Luc had been dating since late 2020. The two went public as a couple, sharing a romantic photo of themselves on both of their Instagram accounts on 6th October 2020.

Nevertheless, Emma has, for a long time, been out of social media so we can’t ascertain whether Emma and Luc are still dating or not.

Besides, Emma’s boyfriend Luc also plays ice hockey. However, for the past few months, the lovebirds have kept their love life away from the public.

Emma has yet to find a good profession for her, so as of now, it is safe to say that she doesn’t earn much money. But on the other hand, Gretzky’s father Wayne Gretzky has an estimated net worth of $250 million. He has earned a major portion of his wealth from his prolific career as an ice hockey player and a coach.

Besides, her famous mother, Janet Jones Gretzky also has a staggering net worth of $100 million according to Celebrity Net Worth. She earned the majority of her fortune from her acting career where she worked in dozens of films as well as television series.

Some of her notable acting roles came in The Flamingo Kid in 1984, American Anthem in 1986, and Police Academy 5: Assignment Miami Beach in 1988.

Other Interesting Facts of Emma