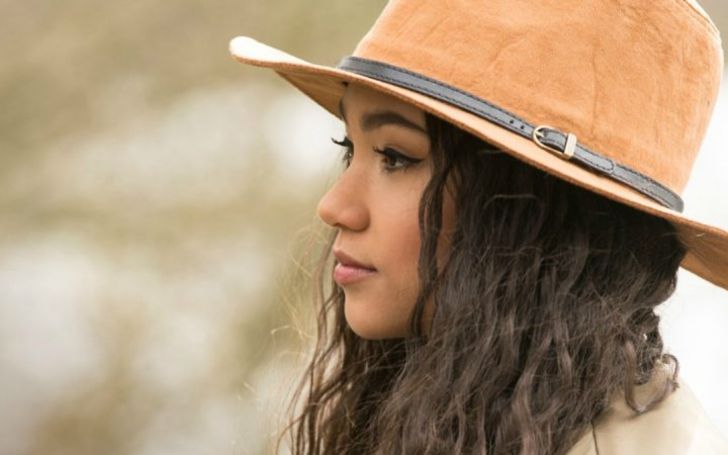 Jade Alleyne is a British actor known for her role in the 2020 Netflix series White Lines. Starting out pretty young in the industry, Jade has made quite a name from her appearances in series like Years and Years, Blue Peter, The Lodge, and many others.

Jade has spent nearly two decades of her lifetime in the limelight. Yet, a lot of the stuff from her private life is secret to her fans. Well, many of her followers are curious to know her life before she kicked off her career in acting. Besides, her love life and boyfriends are never the topics out of their curiosity.

So, let’s talk about Jade’s life in detail.

While the details about her father are not identified, her mother’s name is Kelda Alleyne, who is 56 years of age in 2021. Moreover, she also has a grandmother with who she is very close.

Similarly, she also has an aunt Sonita Alleyne, who apparently helped her a lot with getting into acting and singing, which she always aspired to be.

Alleyne did her primary education at Albyn School. Later, she moved to South London where she got accepted into Sylvia Young Theatre School.

Eventually, she pursued her higher education in various performing arts institutes which also include HJA Performing Arts in Beckenham.

Moreover, she was also a part of Dance Alive, a street dance team.

Jade Alleyne Movies: Made Her Debut With “4 O’Clock Club”

Interested in acting from an early age, Jade made her debut as an actor in 2015, with an appearance in the British comedy-drama 4 O’Clock Club. She played a character named Clem Burton from 2015 to 2017, and later in 2018 as well.

Likewise in 2019 and 2020, she appeared in Years and Years and White Lines, where she played the lead character Ruby Bisme-Lyons and Tanit Ward.

In 2020 Alleyne Appears in White Lines

While she has had many TV works in the past, recently, she garnered wide fame from her appearance in the 2020 British-Spanish mystery-thriller White Lines.

The series revolves around a character named Zoe Collins’ and his brother Axel who had been missing for 20 years but is found dead to everyone’s surprise.

Well apart from Jade, the series also stars actors like Laura Haddock, Nuno Lopes, Marta Milans, Angela Griffin, Daniel Mays, and many others in the lead.

The series was released on May 15, 2020, and is directed by Nick Hamm, Luis Prieto, and Ashley Way.

Does Jade Alleyne Have a Boyfriend?

It looks like Jade does not have a boyfriend in 2020. Well, it may sound surprising, but the truth is she is single and enjoying her singlehood.

However, as it usually happens to celebrities, she has been linked to a few men here and there.

She is Rumored to be Dating British Actor Jayden Revri

Yes, you read it right, Jade is rumored to be in a romantic relationship with The Lodge co-star, Jayden Revri. However, none of the actors have confirmed the rumors.

In fact, their proximity in public appearance is to be referenced, they look like more of a friend than a couple.

Further, they are seen together only for their professional commitments which is pretty much suggestive of their friendship than any sort of romance.

Well, to conclude, Jade is not dating anyone, rather she is single.

Talking about her socials, she is active on Instagram and Tik Tok as well. As of 2020, she has around 106k followers on her official Instagram account. She mainly posts the professional part of her life on Instagram and some of her daily life activities too.

Similarly, she has around 3k followers on her official Tik Tok account.