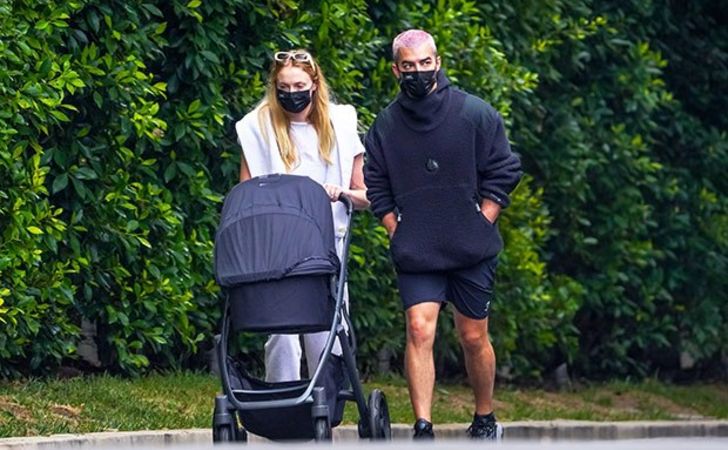 The young couple Sophie Turner and Joe Jonas got their hands full with a new member on board. The new parents are now busy taking care of their first child, Willa Jonas.

Today let’s take a close look at Willa’s life and find out how her parents are coping, upon her arrival.

Willa Jonas is the first child of Joe and Sophie

In June 2020, reps for Mr. and Mrs. Jonas confirmed they have welcomed a daughter. Her birth came out as one of the few good news the year 2020 has to offer. The other news being Katherine Schwarzenegger and Chris Pratt also giving birth to their first child, Lyla Maria Schwarzenegger Pratt.

At first, the name of their kid wasn’t revealed but later TMZ update on this and claimed the child is named, Willa Jonas. Her middle name is still under wraps.

Meanwhile, unlike any other celebrities who often share the news of their child’s arrival on Instagram, Sophie and Joe chose not to do it.

Be that as it may, it could be that Willa’s mom and dad are quite busy changing her diapers.

Initially, news of Sophie’s pregnancy came earlier this year in February, though none of them spoke about expecting or anything.

Like any new parent, Joe and Sophie are quite elated with the new responsibility. Even though the role of a parent sounds burdensome at first, it becomes much easier and rewarding later on. Similarly, the couple also feels the same.

A rep for the duo told E! Online how everything is going on in the Jonas household ever since a new member arrived. The source stated, “They are home and getting settled. Joe is very hands-on and involved. He wants to do everything he can and loves being with the baby and helping Sophie.”

In addition, both of them are reportedly sending pictures of their bundle of joy to their friends. Kinda like showing off how they make cute babies. The source tells, “They’ve been texting pictures to friends and calling on FaceTime to show her off. Everyone is very excited for them.”

Amid the pandemic, the new parents are quite cautious about who is around their kid and who’s not. They are quite into the moment and want to take their time enjoying.

Why did Joe and Sophie Name Their Daughter Willa Jonas? The Inspiration behind it

Initially, TMZ first revealed the name of their firstborn. The name originates from Old German cultures. The name literally translates to ‘will helmet’ or ‘resolute protection.’ The name does sound rather appropriate given it’s the duo’s first child.

Moreover, they might also be inspired by Sophia’s love for the fantasy world. You see, there was a character named Willa in the controversial final season of Game of Thrones. If you don’t recall her then it’s not your fault as she was a minor character. Willa is the one who comforts Tormund the Wildling after he got rejected by Brienne of Tarth.

The name’s inspiration can only be speculated at the moment. We’re sure soon Sophie or Joe might just reveal the real reason behind their girl’s moniker.

She isn’t the only kid in the Jonas household. Willa joins her two older cousins, Alena and Valentina Jonas. Both of them are the daughters of the eldest, Kevin Jonas, and his wife Danielle Jones. Apart from Kevin, the middle one, Nick, is yet to bring forth any kid with his wife, Priyanka Chopra.

The birth of Willa also results in Jonas’s mama, Denise Miller-Jonas getting her hands full with three grandkids. But you know what they say, for grandparents ‘the more the merrier.’

Joe and Sophie started dating back in 2016. They were first spotted together at the MTV EMAs. Within a year of seemingly announcing their affair, they put a ring to it in October 2017.

After remaining betrothed for around two years, they exchanged vows in a beautiful ceremony on May 1st, 2019, in Las Vegas, Nevada. However, the duo didn’t settle for only one wedding. They again walked down the aisle on June 29th, 2019. This time around the nuptials took place in Paris, France.

Prior to dating Sophie, Joe has had lots of affairs in the past. He was first linked to actress AJ Michalka from 2005 to 2006. After breaking up with her, he had a few short-term flings with Taylor Swift and Camilla Bella.

Afterward, he began an on-and-off relationship with singer Demi Lovato from 2008 to 2010. He is still good friends with Demi. His other dating conquests include Gigi Hadid and graphic designer Blanda Eggenschwiler.

On the other hand, Willa’s mom also dated a few guys. Her first love affair was with James McVey. Later on, she rumoredly went out with Thomas Mann and Tye Sheridan before eventually settling with Joe.

Willa Jonas Lifestyle: Her Net Worth

It is quite understandable that any star kids will have all the luxuries of the world. And when your mom and dad are as successful as Sophie and Joe, then it is 10x more.

Her father Joe has a net worth of $25 million, while her mother has a sizeable $8 million. There is no doubt Willa is going to have a prosperous lifestyle.