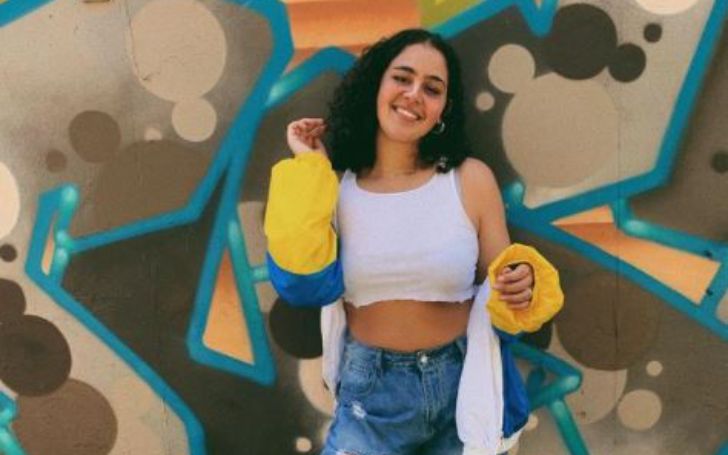 Xea Myers is an American star kid. She is the only daughter between the late rapper Heavy D and celebrity chef, Antonia Lofaso. Her father was one of the most prominent faces in the rap industry.

The star kid has grown up since the last time we saw her during Heavy D’s funeral ceremony. It’s been over a decade since the Jamaican-born rapper passed away and fans are curious to know what is his daughter Xea up to these days?

In this article, let’s find out all the intricate details of Xea’s life and know what is she doing now? In addition, we’ll also cover her parent’s relationship and find out if they were ever married or not?

Xea Myers is the daughter of the late Heavy D

She was born on February 25th, 2000, in the United States, to chef Antonia Lofaso and rapper,  Heavy D.  She belongs to mixed ethnicity. From her father’s side, she is an African-Jamaican while from her mother’s side she is Italian.

Xea was brought up in Los Angeles from where she also received her formal education. She studied at Marymount High School. After graduating high school, she enrolled in a college. When Xea got into college, her mom shared the news on her social media handle, expressing how proud she is but at the same time sad because her daughter is leaving the nest.

It’s always hard to say goodbyes. We’re sure many of you understand what Antonia must’ve felt when she became an empty nester.

Her father was a renowned rapper and producer

Dwight Arrington Myers was born on May 24th, 167, in Mandeville, Jamaica. He along with his mother and father moved to Mount Vernon, New York. He started his rap career with a group called Heavy D and the boyz in the late 80s. With Big D as the frontman and rapper, the group initially signed up with Uptown Records.

Their debut album Living Large was a commercial success, followed by Big Tyme which was a hit as well. Subsequently, after the death of their member Trouble T. Roy in 1990, they released another album titled Peaceful Journey which went on to become a platinum hit.

Over the course of his illustrious career, Heavy worked alongside big names such as Michael Jackson, Janet Jackson, and more. He also sang the theme song for In Living Color and MADtv. Many of you might not know that it was Myers who persuaded Uptown Records chief Andre Harrel to hire Puff Diddy for his debut gig.

On November 8th, 2011, the veteran rapper tragically passed away at the age of 44. At first, it was stated he died due to pneumonia, however, later it turned out to be a pulmonary embolism. According to the coroner, his untimely death came after a deep vein in the leg region broke off. This happened due to Heavy’s prolonged airplane ride. In addition to that, he was also battling heart disease.

After his passing, many big names from the rap industry paid tribute to the fallen rapper. His funeral was held at the Grace Baptist Church which is located in his homeland of Mount Vernon, NY. It was a star-studded event with big names from the industry coming together.

Many of Heavy’s friends from the industry were in attendance including Jay Z, Puff Diddy, Usher, Al Sharpton, Queen Latifah, Don King, and more. Moreover, the Obamas also sent their heartfelt condolences to the grieving family. Their message was read by Reverend Al Sharpton.

Xea’s mom is a renowned chef

Her mom Antonia is a famous chef who came to media prominence after she came in 4th place on the fourth season of Top Chef. Since then she appeared in several other cooking shows including, Top Chef, Chopped, Cutthroat Kitchen, and Restaurant Startup.

Additionally, she operates several restaurants named Black Market Liquor Bar, Scopa Italian Roots, and DAMA in Los Angeles, California. Aside from owning restros, since 2013 she has been serving as one of the rotating judges in Food Network’s Cutthroat Kitchen.

Does Xea Myers have a boyfriend?

Talking about her parent’s relationship, well, sources suggest they were married. However, other sources claim they never exchanged vows. Till now, not much is know about their relationship except for the fact that it was her husband who helped her out initially on her cooking career. Antonia got her big break when she worked as a manager at Heavy’s close pal Diddy’s restaurant, Justin.

How much Xea Myers net worth?

After her father’s demise, his estate was to be inherited by his daughter Xea when she comes of age. Until then her uncle Floyd took care of his brother’s estate. Since Xea is an adult now, we’re sure the estate has been handed over to her. At the time of his death, Heavy D had a net worth of $2 million.

On the other hand, her mother Antonia is a millionaire as well. She primarily earned her fortune through her numerous ventures in the restaurant business. She also rakes in quite a lot of money appearing as a judge in a few cooking shows.