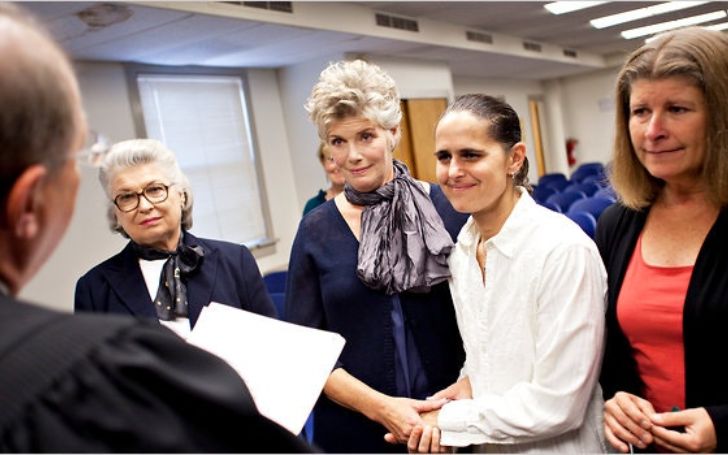 Melanie Leis is the ex-partner of Top Gun actress, Kelly McGillis. Leis and McGillis were partners from 2010 to 2011. The pair had known each other since the start of the 2000s.

Melanie Leis is the longest with whom Kelly has been since her divorce from her ex-husband, Fred Tillman. The relationship, however, was not easy for both Melanie and McGillis with the latter fearing to come out as a lesbian.

So know how they made it work, and what exactly led to their separation. Also read all about McGillis ex, Melanie, her life before meeting the Hollywood star, and also about her pursuits post the separation.

Melanie Leis Is A Sales Executive And A Music Festival Agent

Leis was born in 1968/69. She is a sales executive by profession. In 2010, Ms. Leis used to serve as a regional sales executive in Philadelphia with Independence Communications, which provides Muzak to businesses.

She studied at the Berklee College of Music graduating in Arts, Music Production, and Performance. Kelly’s ex also has an associate degree in Hotel and Restaurant Management from New Burry College. In addition, she is a member of the International Ticketing Association.

A musician herself, Leis is a big James Taylor fan and has been to his concert more than 30 times. Melanie also knows her way around few or two instruments; she started playing piano when she was six and later excelled at playing drums.

From September 2001 to July 2003, Leis worked as a retail manager for Cingular Wireless (AT&T). After that, she served as a district sales manager for PC Management (Feb 2004 to Jan 2008). Leis then started working for Sovereign Bank — remaining there until May 2009 as a portfolio specialist.

In July 2009, Melanie again became a Dist. Sales Manager but this time for Simply Wireless/Mobile Now. She would leave the firm in Jan 2010 and join Retail Business Development as one of their market launch team DM.

Leis would yet again become RSM for Independence Communications, Inc. Her next job would be at Broadview Networks in its sales and development department.

One year later, McGillis’ ex-partner began helming the business development for All Covered Inc. Likewise, her other workplaces include Society of Grownups, Vendini, PD Corp, and Tappit. The latter, Leis joined in July 2021 and since has been acting as its vice president.

In the meantime, she has also done some volunteering works for Houston Hurricane and Haiti Orphanage.

Melanie Leis And Kelly McGillis Met At The Latter’s Bar; Leis There Was A Bartender

Leis entered into a civil union with McGillis in September 2010. She and McGillis had met at a restaurant in Florida where the former was a bartender.

After the marriage, the new couple then moved to rural Pennsylvania to raise McGillis’ daughters, Sonora Tillman and Kelsey Tillman.
Throughout their relationship, Leis and Kelly used to call each other Mell and Kell.
While speaking with NY Times in September 2010, Ms. Leis told of her first encounter with McGillis. The ticketing agent said the year was 2000 and it was at Kelly’s, the bar in Key West, Florida, that McGillis owned with Fred Tillman, her second husband.

“I started working at the restaurant while Kell was out of town working on a movie. One day I looked up, and there she was. I did not see her from across the room or anything like that.”

Leis explained the thought that McGillis was a movie star didn’t play in her mind when she first saw her. She said it was the actress’ presence, not the image of who she was, professionally, but her sense of humor that “absolutely grabbed me.”

Soon after their bar encounter, Leis and the California-born actor became part of a group that went out for a friend’s birthday. Recalling the time, Leis’ former partner, McGillis said how they started talking and was really taken with her.

Shortly after they had sparked a romance in between, they started seeing each other but quickly fell into a destructive pattern. Leis said they were partners in crime and were both drinking and abusing drugs.

In 2001 when they were living together in Mohnton, Pa, Leis said how challenging, time was for them with both newly sober and trying to learn how to live life differently. During their nearly decade-long relationship, McGillis worked steadily in regional theater and on television, including episodes of “The L Word.” She, however, did not speak about the relationship publicly.

The James Taylor fan believes she and her ex-spouse never even had a photograph taken together. This was despite her admitting that she has always been openly gay. The former sales executive said she respected and understood Kelly’s need for privacy. ‘McGillis had even told Leis not to touch her in public.

Leis’ ex, McGillis only came out in 2009, though she once had said she’d been a lesbian most of her life. The now 64-year-old actress admitted she has been finding girls to be attractive since high school, but it “horrified” her because “that wasn’t right.”

Kelly McGillis’ Children Suffered Because Of Her Relationship With Melanie Leis

Leis and her ex described the move from Key West to Mohnton brought its own set of challenges for McGillis’s two daughters. The reason was that their new location was quite a conservative place.

“My kids have always been very understanding, but it was their friends and their friends’ parents that weren’t very accepting.”

She revealed how her kids suffered a great deal because of her relationship with Mell, and how that bothered her a lot. McGillis hence never chose to talk about it. That was until February 2009, when, in an interview with SheWired, she said, “I’m done with the man thing.”

With her daughters grown, and out of the house, McGillis decided she really didn’t have to protect anyone by skirting the question and chose to be absolutely honest. Ironically, by this time, however, she and Leis were no longer together.

Months earlier they had mutually said out loud that the relationship “was no longer working,” and had called it quits. McGillis reasoned that they had changed and grown at different rates, different times. She explained how she always wanted to be with Mell, she wasn’t willing to stick around unless Leis was willing to do some work on herself.

Leis called the breakup with McGillis “the absolute worst time of my life.” The actress’ ex said she was six years sober and the split brought her a new bottom. Leis admitted her problems stemmed from her unwillingness “to honestly look at my core issues, face and deal with them.”

The sales executive recalled the time when she tried to reconcile with McGillis whilst also working on her issues. The Golden Globe nominee then had already started to live in her new home in Collingswood where Leis would visit.

McGillis, however, said that for a time she had doubts as to whether “I could trust her again in my life.”

Eventually, the actress came to the conclusion that she missed Leis, and “her generosity of spirit,” and was still in love. They ultimately started dating again.

Onto their second chance at a relationship, Leis proposed to the Made In Heaven star. McGillis actress agreed, but only on the condition that they stay engaged and see if it works.

And so they did. Then on Sept. 15, 2010, Wednesday morning, they took a new step when Ms. Leis and Ms. McGillis stepped into the chambers of Judge Robert T. Zane III, at the Collingswood Municipal Court. They officiated their union in front of 11 of their friends, including Gillis’ ex-husband, Mr. Tillman.

The former barmaid, Leis, and Hollywood star, McGillis married in a quiet southern New Jersey town. The latter had been sober for a while.

After the ceremony, the attendees and the newlyweds went to the warm September sunshine and headed for the street to the Pop Shop, a kitschy 1950s-style diner.

Not long after, the couple said goodbye to their guests and reminded them about the Christmas time wedding reception they were planning. After exiting the diner, the couple made their way to their black Mini Cooper and then posed for photographers.

Leis and McGillis, eventually, broke up in 2011, and it is unclear if the actress or her ex-partner is dating someone else.

Leis’ former partner hadn’t had easy from her early life to adult and not even her retirement phase. In series of interviews, McGillis has revealed how her own parents kicked out her when she was just 17, being a rape victim to the stigma of coming out and all the substance abuse. All of those had become a talk of yore, but she was destined to be tested once again with a similar incident.

In June 2017, an Illinois woman named, Laurence Maurie Dorn broke into Leis’ ex, McGillis’ Edneyville home. The police later caught the woman and the court sentenced her to 18 months of probation after a jury found her guilty of misdemeanor breaking and entering.

Where Does Melanie Leis Live Now?

Leis as of present resides in Boston, Massachusetts, and is currently busy with her ticketing and music festival gigs. In the meantime, McGillis’ ex also advocates for different fundraising programs through her Facebook.