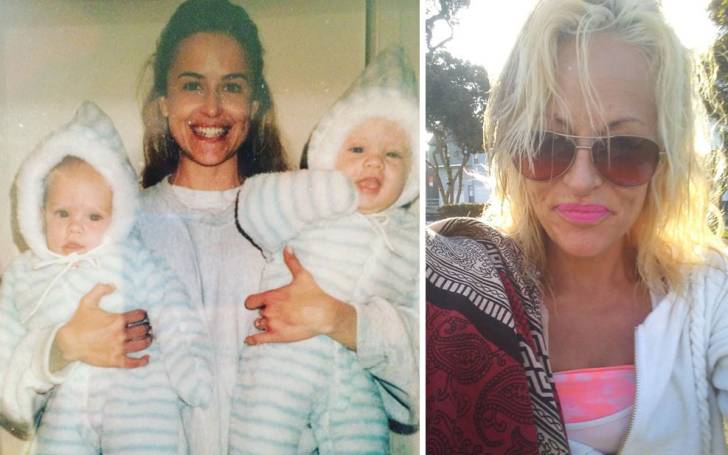 Melanie Wright is recognized as the mother of American actor Cole Sprouse and his twin brother Dylan Sprouse. Both her sons are the established name in Hollywood who rose to prominence through a Disney channel series The Suite Life of Zack & Cody and its sequel The Suite Life on Deck.

Being the mother of such famous actors, people do have curiosity regarding her personal and professional life. So, today, this article will be more about Melanie Wright than her famous children. How her Early life was like? To whom did she get married? How is her relationship with her children?

Find every answer regarding Cole and Dylan Sprouse’s mother in the following piece of writing.

Cole Sprouse’s mother Melanie Wright was born to her mother Jonine Boot Wright and her father Merrill Eugene Wright in Long Beach, California. Her mom was an actress and drama teacher by profession, while her father was a geologist.

Since Wright is in the spotlight as the mother of the American actor Cole and Dylan, details about her early life are not that much revealed and so is her age as well. However, she seems to celebrate her birthday on November 30 every year. On November 30, 2017, she posted her single photo on her Instagram and captioned it,

Following the caption, some of her followers wished her a Happy Birthday and in reply, she wrote back, “Thank u back at u dougie fresh“.

Similarly, Wright spent most of her early life in her hometown alongside her two older sisters Laura Wright-Hoene and Marta Wright-Brounley.

Besides, she belongs to the white ethnicity and holds American nationality.

Melanie Wright’s Career Detail: In Which Profession She Is Into?

Talking about her profession, the celebrity mother Melanie was a teacher by her profession. She was an English teacher in Italy in the early 1990s. In December 1992, she alongside her family shifted back to her hometown Long Beach, California. After that, Melanie seems to have continued her teaching career at Woodrow Wilson Classical High School as per her Facebook.

Apart from her teaching career, she also seems to work as a painter. Around the year 2017, Wright appeared to be tilted more toward painting. At the time, she mostly posted paintings work on her Instagram. On September 30, 2017, she posted a painting post on her Insta page and wrote, “My Work“, which suggests that alongside her profession as a teacher, Melanie also tried her hand as an artist.

Melanie was Married To Her Husband Matthew Sprouse

As earlier mentioned, she is prominent as a celebrity mother. So, like her little-known early details, the information about her marriage is also not detailed in the media. However, it is known that Melanie got married in the year 1990. After marriage, the couple moved to Italy for some time where both of them worked as English teachers.

Later, in December 1992, Wright alongside her husband Matthew Sprouse left Italy and flew back to their native city California. The couple had a beautiful family life with their adorable twin son. But after seven years of marriage, in 1997, Melanie and her husband got divorced. Following their separation, her former spouse remarried while Melanie seems to be single to date.

Melanie Wright Is The Mother Of Twins

Together with her husband Matthew, Melanie Wright gave birth to twin sons Cole Sprouse and Dylan Sprouse on August 4, 1992. Her twins were born fifteen minutes apart in Arezzo, Tuscany, Italy. Coming up to 2023, Melanie’s sons are already 30 years of age.

At present, both her sons have succeeded to establish themselves as an actor in Hollywood. They started acting just at 18 months. Once in a Tumblr audio, Wright’s son Cole said that he credits his mom Melanie for their acting career. He said,

“My brother and I were put into acting when we were 8 months old by our mother because we needed money. I never made the decision to join the arts or acting specifically.

Back then, Melanie Wright wasn’t really happy with her son’s acting, today she is a proud mom as her both sons have accomplished careers in acting. Before moving further, let’s have a look at Melanie’s twins’ achievements.

Her Twin Son Are Well-Known Hollywood Actors; Their Personal And Professional Life

Melanie’s twin sons, Dylan and Cole, both have experienced success as individual actors. As said earlier, both brothers started acting just at the age of 18 months. As of 2023, both of them have acted in several movies and series.

Dylan is famously known for his role as Zack Martin on the Disney channel series The Suite Life on Deck and The Suite Life of Zack and Cody. Apart from his recognizable works, he has acted in movies and series like Big Daddy, The Master of Disguise, Beautiful Disaster, and many other films, Music videos, and series.

Further, he is also the owner of the honey-wine production company All-Wise Meadery. In 2021, he also evolved as a comic writer. Besides a successful career, he also enjoys a beautiful family life along with his partner Barbara Palvin. The couple now resides in Los Angeles together.

Similarly, Dylan’s brother Cole is a well-known actor who rose to fame as Cody Martin in The Suite Life of Zack & Cody and Jughead Jones on the TV series, Riverdale. In his acting career, he also has acted in several series and movies. In addition, he is also a photographer. Moving on to his personal life, Cole is reported to be in a relationship with model Ari Fournier in present. Before, he was in a relationship with his Riverdale co-actor Lil Reinhart.

Melanie Wright Is A Proud Mother yet Apart From Her Sons

Since both her children are doing great both professionally and personally, so, as their mom, Melanie is really proud of them. On March 20, 2018, by sharing a photo on her Instagram, she wrote,

Cheers to my sons, Dylan & Cole. YOU MAKE ME SO PROUD.

Even though as a mom, she is happy that her son has made it in the industry, it seems like she is living far from her sons. Back in 2017, Melanie uploaded a post together with her twins with the caption,

Where are they now?

Actually what happened was after her divorce from her spouse Matthew, custody of her children was given to their father as Wright had issues with alcohol and drugs. So, the twins grew up without a mother and got emotionally detached from their mom. As per a source, back in 2018, the mother-son duo was reunited however both Cole and Dylan filed a restraining order against their mother Melanie.

Besides, back in 2020, the Riverdale actor Cole tweeted on Mother’s day,

Mother’s Day can be hard for some but is also an opportunity to spread love and connection. Make sure to cherish both mothers and children alike.

Hence, seeing the tweet, it can be presumed that Melanie and her son don’t share close bonding.

Even though the mother and son’s bonding is falling apart, back when her sons were little, they absolutely used to adore their mom. Her younger son Cole had written a poem for her that was like,

I love you mom you are the best

Your better than all the rest

And if everyone ever take us apart

I’d repeatedly stab them in their heart

Looking at this, it can be said that the young Cole was really very attached to his mom Melanie and was hugely possessive regarding her.

Apart from being an actor, one of Melanie’s twins Dylan is also a comic writer. In Aug 2021, he co-authored the book Sun Eater alongside Joe Harris which was published on Aug 2021. During the promotion of his book, he told that his comic story is heavily influenced by his mom Melanie Wright. In this regard, he told

“This is a story that’s largely influenced by my own interactions with my mother and her vices,”

In case you don’t know, Melanie struggled with drug addiction in her life. Due to her addiction, her children also suffered and that too at a young age. In relation to this, Dylan stated,

“Everything kind of links to my own familial relationship, and I think [the comic book] has a lot to say about [being] a dark metaphor for drug addiction, and then how these things pass to your children.”

Wright Is On Social Media Handles

Cole and Dylan’s mom Melanie Wright has an Instagram account with 1662 followers. On Instagram, she mostly uploads single photos and also has shared her famous son’s photos. Wright last was last active on Instagram in April 2018 and since then she hasn’t shared anything new.

As Melanie Wright is an artist so, it is believed that she has a net worth of $500,000 as of 2023. On the other hand, her twin son Dylan and Cole have an estimated net worth of $8 million.