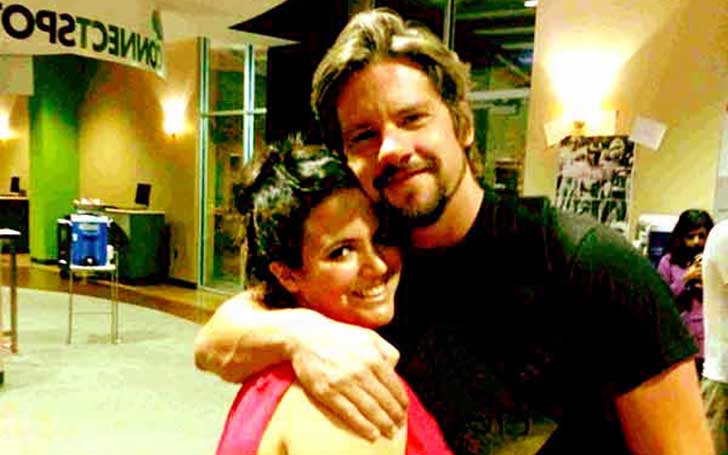 We know a lot of celebrity spouses who love to be in the spotlight as much as their partners. While there also are some people who don’t indulge in being in the limelight no matter how famous are their spouses. Today, we are talking about one of those celebrity spouses who prefer living under the media radar all the time. And she is none other than Hang Knighton.

Knighton is the former wife of famous actor Zachary Knighton. Zachary is most well-known for his portrayal of Dave Rose on the ABC sitcom Happy Endings. Besides, he is popular for his role in the FOX sitcom Weird Loners and CBS drama series Magnum P.I.

So, let’s go through some interesting facts about Hang Knighton.

Hang shared a married life with Magnum P.I. actor Zachary from 2008 to 2015. The former husband-and-wife reportedly dated for years before they tied the knot in the late 2000s, however, there is no detail of the day and venue of their wedding.

Hang and Zach never disclosed the reason for their divorce while some online tabloids speculated Zach’s extra-marital affair might be the cause. At the time Hang and Zach’s married relationship turned sour, he was reportedly dating an unidentified woman.

Not long after their divorce, Zachary made his relationship with actress Betsy Phillips public. So, there was speculation that the unidentified woman Zach was in an extra-marital relationship with was Betsy. However, there is no official confirmation about this.

Hang and Zach Gave Birth to a Child

Hang Knighton gave birth to a baby girl with her former husband Zachary Knighton. She welcomed a daughter named Tallulah Knighton on September 20, 2010. In 2019, Zach took to his Instagram wishing his daughter on her ninth birthday. “The legend turned 9 today,” wrote Zach alongside the post.

Though unclear, Tallulah is believed to be sharing her time between her father and mother. And Hang and Zach probably share legal and physical custody of their child.

A Short Bio of Zachary Knighton

Zachary is an actor famous for his portrayal of Dave Rose on the ABC sitcom, Happy Endings. Besides, Knighton is also renowned for his work on the ABC sci-fi series, FlashForward. Zachary Knighton was born in Alexandra, Virginia on October 25, 1978.

He started his acting journey in 2000 with the role of Mr. Rolly in the film Cherry Falls. The following year, Knighton made his television debut on an episode of a comedy-drama television series, Ed.

In 2007, Knighton famously starred in the horror film remake The Hitcher alongside Sophia Bush. In 2009, he played the role of Bryce Varley in FlashForward, and from 2011 to 2013, Knighton portrayed the role of Dave Rose on Happy Endings alongside Elisha Cuthbert, Eliza Coupe, and Casey Wilson.

What is Hang Knighton’s Net Worth?

Hang’s professional work is not well-documented in the media. Moreover, her lifestyle following her divorce has remained a mystery so far. So, it is difficult to predict her income and net worth at the moment. But on the other hand, her ex-husband, Zachary earns a handsome sum of money from his acting career. As per Celebrity Net Worth, Zachary has a decent net worth of $8 million in 2020.

While Hang Knighton’s relationship status following her divorce is under the media radar, actor Zachary is living a peaceful married life. The 42-year-old actor is married to actress Betsy Phillips for a couple of years now. Betsy is famous for her roles in movies like Bounce Past (2013), The Love Inside (2015), and Magnum P.I. (2018).

They remained together for a long time before they announced their relationship in the media. In fact, many online tabloids had speculated they were an item way before they went public.

On August 27, 2019, Zachary took to Instagram to mark his first wedding anniversary. “It’s been the best year of my life. Happy one year anniversary @incredibetsy I love you so much ❤️ now let’s have a baby!” wrote Knighton in the caption. Check out the post:

Zach and Betsy gave birth to their first child, a son, together on October 25, 2019. Coincidentally, their son’s birthday resembles Zachary’s. The Happy Endings star announced the birth of his son, Bear Analu Knighton through an Instagram post.

In the post, he also mentioned Analu was 7lbs 13oz at his birth. Since the birth of their child, Zachary has shared many photos with Bear on social media. Moreover, he has been spending most of his free time with his family ever since.