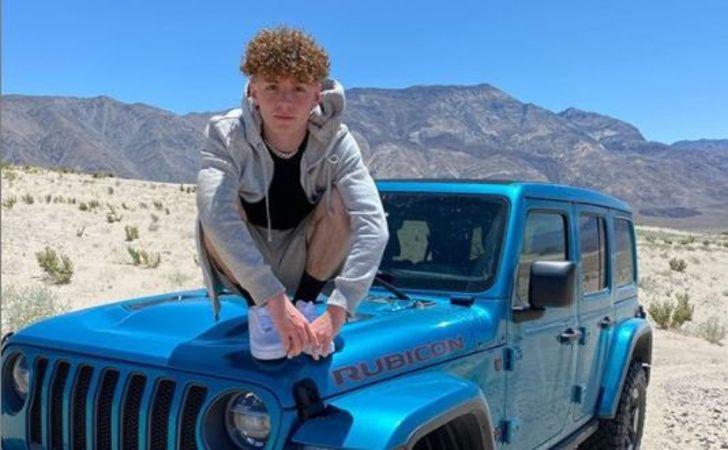 Mikey Tua is a successful social media star with a decent authority on social platforms like Instagram & TikTok. The 19 years old Mikey is not just a social media influencer but also an actor, model, & dancer.

Moreover, Tua is often in the media also because of his love affairs. He is dating his girlfriend Danielle Cohn in 2020. However, the two did have a bit of conflict in the past which was a major highlight.

Well, here let’s talk in detail about Mikey’s career, love life, parents, and a lot of other interesting details.

Born in an American family, Tua developed an appetite for performing arts very early in life. In fact, he started taking dance classes when he was just eight years of age.

Talking about his formal education, he was home-schooled initially and later continued his schooling in Los Angeles, where he also resides at present.

How Old Is Mikey Tua?

He Has an Older Brother Jojo Tua

Mikey is not the only child of his parents but he also has an older brother Jojo Tua. Like him, his younger brother is also an actor and has appeared in a few short films as well.

Besides, he was also reportedly part of the first season of HBO’s Euphoria. Talking of the two brothers, they share a great bond, however, they rarely make appearances together.

As for a fact, Jojo is 2 years older than Mikey.

His Parents Are Proud of Him

Though Mikey had a bit of conflict with his parents back in 2019, he now seems to share a great relationship. In fact, Mikey’s father Delvin has “Proud Dad of @jojotua & @mikeytua” written on his Instagram bio.

Further, his mother Katie often shares memories with her kids on her Instagram, which pretty clearly reflects the bond they share.

As of now, Mikey is not in a relationship. He is currently relishing his single life. However, he once dated a famous personality before.

Mikey was in a much talked about relationship with his now ex-girlfriend Danielle Cohn. Mikey and Danielle began dating in June 2018. They revealed their relationship in one of the videos on Danielle’s YouTube channel.

Though they had a brief split at the end of 2019, things seem to be sorted out at present.

Rumors of Their Split

Back in April 2019, Mikey pulled out a prank with his ex-girlfriend Cohn where she pretended to be pregnant. Not only this, but they also pretended to get married later on at a chapel in Las Vegas.

But unfortunately, the prank backfired after Tua’s parents took control of his social media handles. In the meantime, the two lost contact and there were rumors of their split. Danielle addressed the then-ongoing conflicts in a YouTube video titled “My Relationship Status“.

In the same manner, Tua’s parents too made a post stating their concern for their kid. Pointing out the pregnancy prank, Danielle’s mother Katie wrote,

After some sensitive information was brought to my attention about Danielle, we no longer support Mikey and Danielle’s relationship, because Mikey is still a minor, we have taken away his social media. He will be able to get it back when we have worked through some legal stuff. Thank you!

Are Mikey Tua and Danielle Cohn Still Together?

As of 2022, Mikey and Danielle are not together and not dating. Reportedly, the couple broke-up in 2021. Mike even discussed his split with Danielle in a video.

Before this, there were rumors of their split back in 2019, however, it was just a part of a prank and nothing serious.

Prior to their break-up, the lovebirds used to share a lot of intimate and enjoyable photos with each other.

On October 19, 2020, Danielle posted a video on her Instagram where she was seen walking with Mikey to what she referred to as the Hotel of TERROR! 👻. Check it out.

Well, more than anything, the pair had a good run before splitting for good.

Along with a career as an Influencer, Mikey, as we have already mentioned, also has his hand in the acting world. He ventured into the acting world in Jay Gerren’s directorial Try to Smile, a story of an African-American woman struggling with a generational curse. In the film, Tua portrayed a character named Austin.

Similarly, he was also a part of a short film named Coma, which tells the story of three strangers who come together in Los Angeles.

Besides, he was in a music video alongside his ex-girlfriend Danielle Cohn for her song ‘Only You.’

Well, as of 2022, Mikey is working with Impact Talent Group and MSA Talent Agency.

He Is Very Active On Social Media

As an influencer, Tua is pretty obvious to be on social media. He is active on all the major platforms like Instagram, Twitter, and TikTok as well.

He also has a strong fan base on TikTok, with over 1.9 million followers at present.