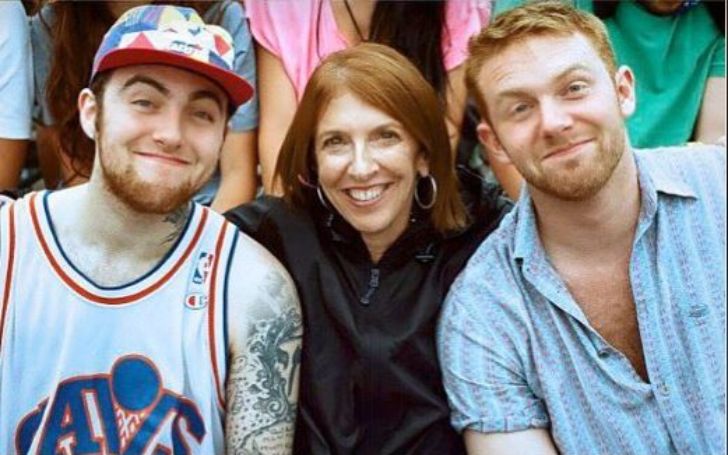 Miller McCormick is a designer from Pittsburgh Pennsylvania who is also the elder brother of the late singer, rapper, and record producer Mac Miller.

It was Miller McCormick who designed every one of his late brother’s album covers. He gave decorations to Mac’s every record from 2010’s Blue Slide Park to 2016’s The Divine Feminine. McCormick has also designed various other projects and crafted them for various musicians.

Miller does miss his deceased brother and also pays tribute to him frequently. However, unlike his late brother, McCormick has substantially kept himself under the radar. That being said, the star sibling is said to be dating a known celebrity’s daughter. So who is his girlfriend? Keep reading to know more about him.

Miller McCormick’s mother Karen Meyers, a photographer by profession is Jewish. On the other hand, his father, Mark McCormick is an architect.

Although Karen and Mark raised Miller and his late brother Jewish, the siblings attended a Catholic grade school. While it is unclear what school Miller attended, his late brother had gone to Winchester Thurston School and later graduated from Taylor Allderdice High School.

Miller McCormick was born in Jan 1989. He is currently 33 years old.

What does Miller McCormick do? His Career As A Graphic Artist

As mentioned Miller is an artist who however works in visual mediums. According to his LinkedIn, McCormick is a freelance graphic designer.

Miller also has a website where he shows off plenty of his work.

He also drew for the song Might Not Be OK by Kenneth Whalum and Big K.R.I.T.

To say more, in addition to giving aesthetics to several musical artists, McCormick has an array of work credentials as a designer. His earliest recorded work experience dates back to May 2011 when he started working for Belle And Wissell, Co. Following that he worked for companies such as AccuWeather, Actual Size Creative, Chandelier Creative, Aquent, and Pro Unlimited. He now mostly operates as a freelancer.

Miller studied at Penn State University from 2008 to 2012. He has a degree in Bachelor of Arts.

McCormick’s brother Mac died on Sep 7 2018 from an accidental drug overdose. The Blue Side Park singer’s personal assistant found him unresponsive in his Studio City home. He performed CPR until paramedics arrived. The forensic pronounced Mac dead at the scene at 11:51 am.

Once while making a remembrance for his late brother, McCormick, on his Instagram, wrote,

[M]alcolm made people into friends. [T]he light, that stuff really stays,” he wrote. “[I] just picture him during the livestream running circles in a living room and jumping next to someone on a couch. [I] miss you and [I] love you a lot.

Two months after the death of Mac, on Nov 5, 2018, the Los Angeles County Coroner’s office discovered that the Pittsburgh native lost his life from an accidental drug overdose due to a mixed drug toxicity of fentanyl, cocaine, and alcohol.

The following year in Sep 2019 during an investigation into Mac’s death, the police arrested three men, Cameron James Pettit, Ryan Reavis, and Stephen Walter. Cameron reportedly supplied McCormick’s brother with counterfeit oxycodone. The other two men were also involved in the supply. The court charged them with charges of conspiracy and distribution of drugs resulting in death.

Miller McCormick Has A Celebrity Girlfriend: Does he have a wife?

It is unclear when the Penn State University graduate, Miller, and Cazzie David started dating but sources report that it has been some years since they became a thing. When Page Six exclusively announced the news in Dec 2021, the outlet also reported that it had been over a year or possibly almost two since the two started their relationship. So it presumably might have been around the year 2018.

Cazzie and the art designer, Miller came to know each other after the former reached out to the latter’s family in the wake of Mac’s death. David was reportedly a good friend of the late Circles singer.

David and McCormick, now apparently are so serious that they are already living together. Page Six also reported a real estate transfer that said Cazzie and Mac’s brother had purchased a home in the latter’s native of Pittsburgh for $450,000 in Feb 2021.

The property reportedly has four bedrooms, and four bathrooms, and is in the vicinity of the tree-lined community of Regent Square on the city’s East End. The couple however is quite private about their relationship.

Cazzie was previously in a relationship with the SNL star and proclaimed Hollywood womanizer Pete Davidson. Their fling lasted until Davidson started dating the Love Me Harder singer Ariana Grande. Grande herself was the ex-girlfriend of McCormick’s late brother Mac Miller. Grande now however is married to Dalton Gomez.

Besides, Cazzie in an interview revealed she was heartbroken after her breakup with Davidson.

McCormick’s current partner, Cazzie is the daughter of the Seinfeld and Curb Your Enthusiasm writer, Larry David. Larry had Cazzie with his ex-wife and environmental activist Laurie David. Cazzie is the eldest daughter of Larry. He and his former spouse Laurie are also parents to Cazzie’s sister, Romy David.

Miller’s partner Cazzie is also a writer and producer. She furthermore had her very own web series titled Eighty-Sixed. Cazzie is a graduate of Emerson College. She majored in film writing and passed out in 2015 with a Bachelor of Arts.

There’s an extremely good chance that McCormick was dating someone else before his current girlfriend Cazzie came into the picture. This however is strictly in light of some Instagram posts or pictures that still exist on the internet. The images consist of Mac’s brother with a woman named Cody Metzger.

Not much about Metzger is known but the stills of her and Miller apparently started to surface in the summer of 2016 and for the next few years, their pictures continued to emerge albeit occasionally. Even McCormick’s mother’s Instagram has one such picture of her son and Metzger getting cushy with each other.

As for now, the supposed couple seems to have separated. It however is unknown whether or not they were serious or why they even broke up.