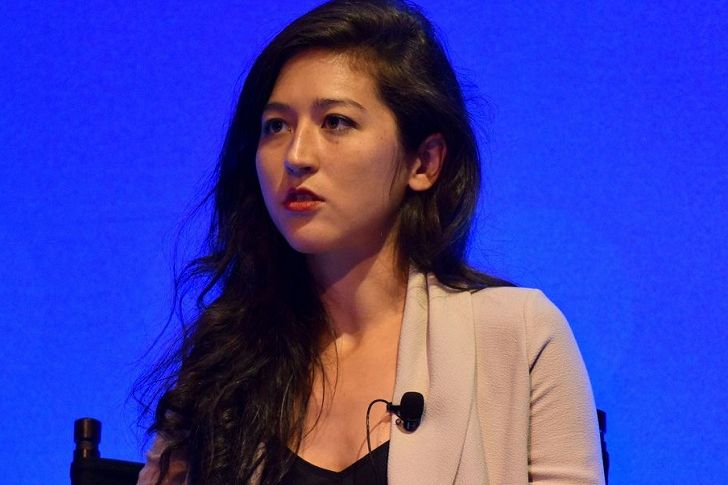 Mina Kimes is an Award-winning investigative journalist with wide knowledge in business and sports. She has worked as a writer for many reputed outlets like Fortune magazine and Bloomberg News. Kimes currently serves as the host of ESPN‘s daily news podcast ESPN Daily.

Mina has been married to her husband, Nick Sylvester for five years and together for nearly a decade.

Who are Mina Kimes’ Parents? She has a mixed ethnic background

Mina Kimes was born on 8th Sep 1985, in Omaha, Nebraska, United States. She belongs to the American nationality and her ethnicity is mixed. Her mother Sun-Min Kimes is of Korean descent. The name of her father is, however, missing who worked in the Air Force. Regardless of that, Kimes widely talks about her doting father on Tumblr and other social media platforms. She once said of her mom and dad,

My mother was warm and familiar, but my father, a captain in the Air Force, was an object of perpetual fascination. He wore a funny blue hat that looked like an upside-down envelope and carried a fake leather briefcase he had bought in Korea. He read historical fiction, massive paperbacks with one word titles like Lincoln and Alaska. When he returned from business trips, he always brought me miniature bottles of shampoo from the hotels where he stayed, usually Motel 8s and Howard Johnsons.

Kimes also has an older brother named Isaac Kimes. As per his Instagram page, Isaac is an attorney by profession and currently works at Hughes & Coleman Injury Lawyers, in Nashville.

Growing up, it was Kime’s dad who paved her interest in sports. According to her, her dad is the sole reason, she ever got into sports. Although she wasn’t able to become an athlete, she sates her hunger through writing. In a tweet made on the occasion of Father’s Day, Mina wrote,

“my dad is the reason why I love sports. I post this every father’s day, because it reminds me of how much he’s given me.”

Kimes is a tattoo enthusiast. So back when she was just a kid, she made a pact if Seahawk won the Superbowl series, she and her brother would get matching tat to celebrate the event.

In an interview with SONY ESPN, Mina told,

my older brother and I made a pact: If Seattle ever won the Super Bowl, we would get matching ink to commemorate the event.

Following the victory, they both inscribed the tattoo that features the letters XLVIII. She has inked it on her right inner bicep.

Kimes also has a tat on her left shoulder.

In 2007, Mina Kimes first started a job as a writer at Fortune Small Business Magazine, exposing illegal activities by medical-device enterprises. During her association with the outlet, the journalist won a number of accolades. She won the National Press Club award.

Additionally, the Society of American Business Editors and Writers awarded her with the Larry Birger Young Business Journalist Prize. Furthermore, Kimes also won the Henry R. Luce Award for her 2012 investigation entitled Bad to the Bone.

In 2013, Bloomberg News designated Mina as its investigative reporter.

There, Kimes wrote profiles of business magnates including Doug Oberhelman titled King Kat and Eddie Lampert titled The Sun Tzu at Sears. For her work, she also won the Front Page Award.

ESPN offered Mina Kimes a prestigious position of editor shortly after her essay about a “bond between herself and her dad and the Seattle Seahawks” which she wrote on Tumblr.

Who is Mina Kimes’ Husband? Know About Their Wedding

Mina Kimes exchanged the vows with her long-time boyfriend Nick Sylvester on 19th Sep 2015, in a wedding ceremony held in Philadelphia, Pennsylvania. Nick is a songwriter and a synthesist.

Although neither Mina nor her husband Nick has revealed when they first met, judging by her Instagram, it seems the two are together for a decade now.

Kimes has posted a series of Nick’s pictures on her Instagram since 2012. She first shared his photo on 28th June 2012.

In March 2013, the couple was also spotted enjoying a romantic holiday in Puerto Plata.

Despite their years-long relationship, the two are yet to become the parents of any child.

Kimes has earned a good amount of money from her flourishing media career. Her estimated net worth is $1 million as of 2021. And the journalist is also paid a good salary.

Mina Is a Dog Lover

Mina Kimes has a pet puppy, Lenny. Her husband Nick even mentions himself as the father of their pooch on his Instagram page. Her social media is also flooded with a number of loving pet pictures.

Mina also made a guest appearance in Katie Nolan‘s ESPN series, “Always Late with Katie Nolan” in 2019. They appeared as a judge of the cutest dogs in sports in the video.

Is Mina Kimes Married? Who is Her Husband? The truth about her love life.