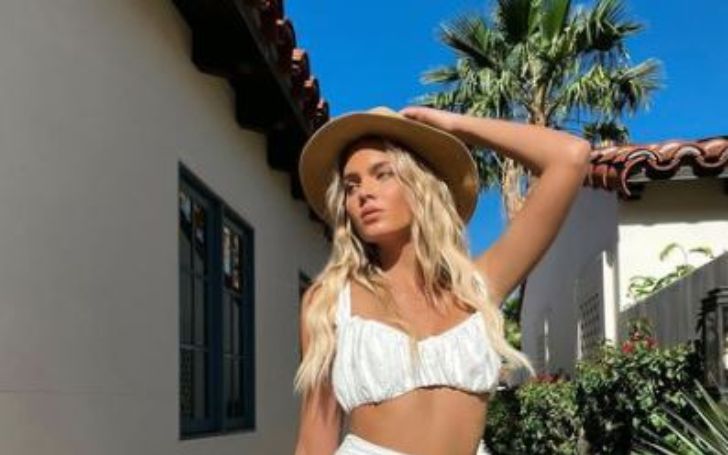 Morgan Ketzner is a social media influencer, blogger, and model. Similarly, Morgan is one of the individuals who are able to make a name with nobody’s help. The multi-talented model has even worked with many well-known fashion brands, including Sports Illustrated, Maxim Mexico, Ignite, ASOS, Ragstock, One One Swimwear, and many more.

Besides, there are lots of people asking about Morgan’s love life. Whether she is romantically linked with someone or not. If yes, then who is the lucky person to be a part of Ketzner’s life?

Today, here in this article you will know everything about her including her age, height, career, net worth, and many more.

How Old Is Morgan Ketzner? Info On Her Age, Siblings, & Parents

Morgan Ketzner is 29 years old as of 2023. She was born on November 1, 1993, in Minnesota, USA. Morgan is the daughter of Beth Ketzner (mom). However, her dad’s name remains unknown. The model revealed her mother’s identity and name through her Facebook page.

It was on the occasion of Beth’s birthday. She wrote the caption,

Besides, talking about her siblings, Ketzner has one older sister named Paige Ketzner. Aside from this, Morgan is an American by nationality, and she belongs to Caucasian ethnical background.

Morgan Ketzner studied at Metro State University and has a Bachelor’s degree in Public Relations/Image Management.

As per the data provided by the modeling agency Stars Management, Morgan stands at 5 feet 7.5 inches in height and around 54 kg in weight. Similarly, her waist is measured 23 inches, her bust 32 inches, and her hip 33.5 inches. The 29-year-old model has dark blonde hair and green eyes.

Morgan Ketzner Has Been In Fashion World For Almost A Decade

As mentioned above Morgan is a model and influencer. She started her career as a model in 2013. Within two years of work experience, she had already started modeling for large editorials in Europe, South Korea, and Mexico.

The model has worked with dozens of modeling companies. Some of them are named Sports Illustrated, Maxim Mexico, Ignite, ASOS, Ragstock, One One Swimwear, Pretty Little Thing, and Revolve.

Don’t Miss: Why you should follow OnlyFans model Sara Underwood?

Morgan’s work experience doesn’t stop here, in fact, she has also been featured for Fashion Nova, Koana Swim, Luli Fama, Fast Protein, Tobi, Scent Bird, Club London, and many others. Besides, she currently works at Elite Management and Stars Management.

In addition to that, every member of Ketzner’s family is proud of her work. Not only that but, on 16 April 2014, her elder sister Paige even came up with a post. She captioned the post,

“Big shout out to this girl aka my sister as she begins her 3 month modeling contract overseas today! I love you so much! I’m not sure what I’m going to do the next 3 months with out my best friend.”

As a model, Morgan mainly does photoshoots in her swim wears. Similarly, she has traveled to several countries for her work including, Costa Rica, St Barths, Palm Beach, Puerto Rico, San Diego, Miami, Los Angeles, and many more.

Morgan Ketzner Worked As A Barista

Apart from a career in modeling, did you know Morgan has seven years of work experience as a barista? Ketzner began working at Starbucks when she was in high school until she became a college student. She has even said it in her YouTube video.

The video is titled Q & A, where she has told that she could make every drink with her eyes closed. The question was asked, if she could have any job that isn’t her current one, what would that job be?

“Oh for sure working at starbucks as a barista. I did that for seven years in high school and then part of college love it. I could make every drink with my eyes closed like in all honesty like when i first started working at starbucks um we i started having like funky dreams about like the ingredients like it was just so”

Is Morgan Ketzner Dating Anyone?

Morgan Ketzner isn’t dating anyone as of 2023. She is a very private person when it comes to her personal life mainly her love life. On top of that, she seems to be focused on her career rather than making her getting linked to anyone, anytime soon.

Besides, Morgan has said she prefers the narcissist type of guy. Around six months ago, she uploaded a video, ‘Panda Express Q & A! Relationship addition Mukbang,’ where she revealed that she once met such a guy.

“This one guy once um like a couple years ago and like we hadn’t even met yet and also he’s like making these plans like oh um i can’t wait to meet your family. I’m gonna make a trip down to Minnesota”

However, in the end, their relationship couldn’t move further. Although Morgan liked the behavior at first, and she even thought of him to be a real deal, it didn’t work out. After the first meeting, Ketzner never saw that guy again.

Morgan Ketzner is estimated to have a net worth of $1 million as of 2023. She has been making money through her career as a model and as a YouTuber. There isn’t any doubt that her fortune will be growing in the upcoming days.

Is Morgan Ketzner Available On Every Social Media Platform?

Apart from her social media handles, Morgan also has an account on OnlyFans. In the platform, Morgan has set subscription plans from monthly to yearly.

Annie Wersching Died At Age 45: The Cause Of Death