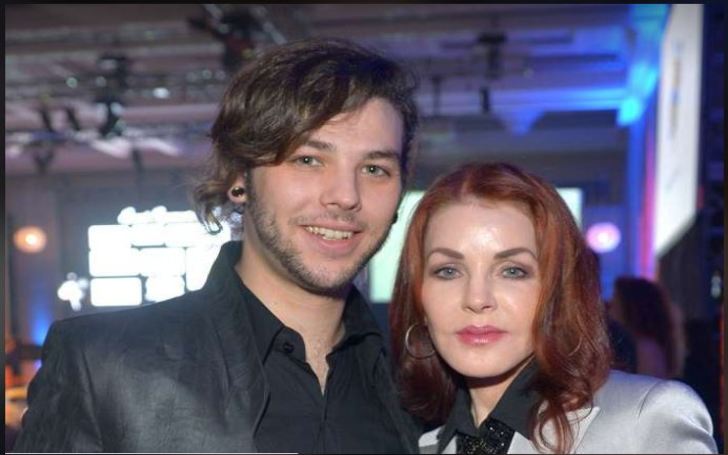 Navarone Garibaldi, born Navarone Anthony Garibaldi, is the son of Priscilla Presley, the ex-wife of the late, Elvis Presley. He is also the frontman of the band Them Guns.

People often link Elvis’ name with Navarone; wondering if he is really his biological son? On the other hand, Galibardi is also quite famous through his relationship with his actress mother, Priscilla.

Priscilla made a lot of headlines while in a relationship with Elvis, and she continued to be on tabloids’ radar even after the divorce and more so post the death of Rock and Roll’s King. And now the few of the fame have turned to her son, Navarone. So read what is so interesting about Garibaldi? Is he really the son of Elvis?

Navarone Garibaldi Is A Californian

Garibaldi was born on March 1, 1987, in Santa Monica, California. His maternal grandfather, James Wagner, died in a plane crash while working as a U.S. Navy pilot.

Is He The Son Of Elvis Presley?

As stated Navarone was born in 1987. This clearly means Elvis would have been dead for almost 10 years when the young musician was born. Garibaldi’s mother, Priscilla, and music icon Elvis Presley were in a marital tie for just under six years from 1967 until their divorce in 1973. And while they had a child, it wasn’t Navarone, it was a daughter – Lisa Marie.

Navarone’s mother Priscilla first met Elvis Presley at the age of 14 in 1959, when her family was stationed in Germany.

Garibaldi is the son of Priscilla Presley and Marco Garibaldi. Priscilla and Marco were together for 22 years; they separated in 2006. The couple though never married each other.

Anthony’s parents met in 1984 after a mutual friend recommended Marco as a screenwriter for Priscilla’s new project.

His Father Is A Con Artist?!

Aug 2018 brought quite a shock to Navarone’s mother, Priscilla. She was surprised when she found out that her ex-partner, Marco was a con artist who had faked his last name to the noble-sounding Garibaldi. In addition, he had also convinced people and Priscilla herself into thinking his wealthy Italian family had moved to Brazil when he was a kid.

However, Navarone’s father’s real name turned out to be Garcia. Marco had changed his last name and invented a romantic story about Europe and wealth to impress Hollywood bigwigs and Priscilla after they met in 1984.

An insider reported Galibardi’s father actually comes from a middle-class Brazilian family. He, however, had told everyone, including Priscilla, he was from a very important Italian family.

It was his son, Navarone who first got texts from a teenage Brazilian relative about his father. When Priscilla’s son confronted his father about it, Marco blew up and told his son to never speak to him again.

Navarone then himself flew down to Brazil to meet his relatives. Apparently, he found out that his father was indeed lying and he was Brazilian after all. The California-born rock artist said his mother felt shocked when she heard all about this.

Priscilla’s son, Garibaldi has a half-sister of Lisa Marie Presley. Marie was born on February 1, 1968, through Priscilla and Elvis’ union.

In Aug 2017, Blasting News forwarded that there were some bitter feelings brewing between Priscilla’s children, Navarone and Lisa.

A Facebook Group, The Conspiracy or Truth of Elvis, then posted on their official page that Lisa’s half-brother, for reasons still unknown, decided to go on Instagram to say some inappropriate words to his sister. As per the FB page, Anthony Garibaldi posted that Marie was not a nice person and called her a f*****g c**t, all before wishing her dead.

The comment was short-lived, but thousands of viewers had already read the hateful remarks. It never came to be known what really was the matter.

Some speculate this is mostly because of Lisa Marie Presley’s strained relationship with her mother Priscilla. She once revealed that she was broke, and financially cut off by her mother during such a dire time in her life.

Navarone started up Them Guns, an alternative rock band which he says was influenced by Nirvana, Nine Inch Nails Kings of Leon to the likes of the Chemical Brothers.

Them Guns, a Los Angeles-based rock band has Garibaldi as the guitarist and the lead vocalist. Serving in the same role is Kyle Hamood (also in the keys). Additionally, the group has Bobby Vega in the drums while and Chuck Holiday in the bass.

Navarone band carries the theme of a rock base, a tinge of surf/ska vocals, and funked-out keys, as well as psychedelic rock music.

In the States, Them Guns saw sold-out shows at The Viper Room, The Troubadour in West Hollywood, and many other rock venues.

How Is He Related To Riley Keough?

Why Did Navarone Garibaldi’s Nephew Benjamin Keough Kill Himself?

Benjamin who was 27 at the time of his death was also a musician who had struck a record deal back in 2009 worth $5 million. Although it has been quite some time since the shocking demise, the reason why Navarone’s nephew took his own life is yet to be disclosed. Navarone took to his socials to express how devastated he and his family was. He also thanked Benjamins’s fans for all their support.

Navarone Arrested For DUI In 2009

In Nov 2009, the police arrested Navarone for driving under the influence in Beverly Hills. However, as a first-time offender, the musician pleaded not guilty in 2010. He received a guilty verdict for driving while having a .08 percent or higher blood alcohol level after he pleaded no contest though. The judge sentenced him to 36 months of probation. The authorities also ordered him to complete a three-month alcohol and drug prevention program in Santa Cruz.

What’s interesting is that all these incidents did not surface until a decade later, when Radar Online published the news in July 2019.

Navarone Garibaldi Was Also Arrested For The Possession Of Illegal Substances

When Navarone was 17, his mother, Priscilla had to reach the police station in Glendale, east of Los Angeles to bail him out. The officials had arrested him under the influence of marijuana and in possession of hallucinogenic mushrooms. Allegedly, Priscilla’s son with Marco lived a hippie life through his late teens to early 20s, living in a dirty rental house in central California.

Navarone reportedly has a weird choice when it comes to pets. The lead vocalist is a reptile lover and collects reticulated pythons and Asian water monitors. He often releases a video on Vimeo detailing his love for his crawling pets. Priscilla’s son also does extensive breeding of his reptiles. He has named one of the snakes, Winona Ryder.

Navarone is set to marry his Swiss girlfriend, Elisa in 2022. They got engaged on Christmas Day 2020. The reptile lover took to his Instagram to announce the news of his betrothment to his blonde girlfriend. Navarone and his wife-to-be, Elisa have been together since at least Sep 2018.

The singer’s mother, Priscilla has been pushing him to give her grandchildren.

Navarone Garibaldi’s net worth is yet to be disclosed. Whatever the case though, he may not be as affluent as his businesswoman mother, Priscilla Presley who has wealth worth over $50million.

And while sources may not have a solid assessment of Navarone’s financial details, he is very much assumed to be a loaded guy. His revenue could be anywhere from hundreds of thousands of dollars to even millions. It should hardly be the case where he is not gaining enough from his moderately successfully musical career.

Other Facts About Navarone Garibaldi:

Ice Cube’s Daughter Karima Jackson: Everything About Her