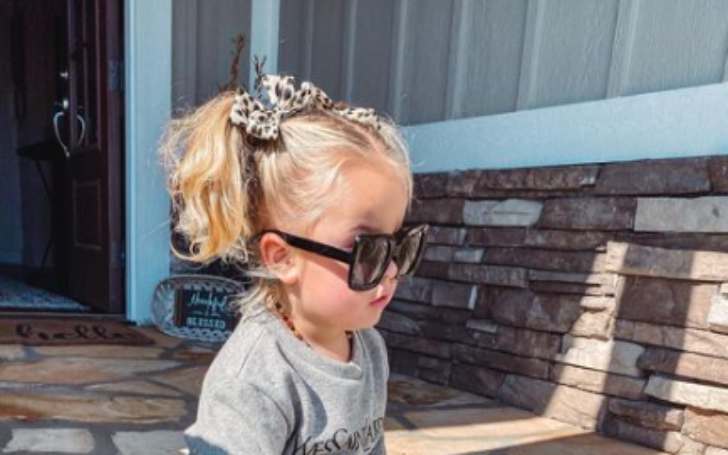 Navy Joan Roberts is the seventh grandchild of the 46th U.S President, Joe Biden. She is the daughter of Joe’s second son Hunter Biden. Her father Hunter is an American attorney known for many controversial reasons.

Although her father is a regular face in the media, the details about her biological mother still remain quite elusive. Sources say Navy’s mother is a stripper who also sued her one-time partner Hunter for the child’s custody after the attorney denied to admit the paternity of their child.

So, let’s find out is Navy really Joe Biden’s biological grandchild? Also, explore the short-lived relationship of her parents and her current whereabouts!

Who is Navy Joan Roberts? Her Childhood Details

As aforementioned, Navy Joan is one of the grandchildren of US President Joe Biden. She was born on August 28, 2018, in Little Rock, a city in Arkansas, United States. She was born to Hunter Biden and her biological mother is Lunden Alexis Roberts. Her mom was the one who first announced the birth of their daughter. A couple of days later, Roberts posted a collage of her newly-born baby and revealed her name as well as her date of birth in the caption. She wrote,

Moving into her nationality, the three-year-old belongs to American nationality and has a mixed ethnical background.

Navy’s mom, Lunden Roberts is a native of Batesville, Arkansas. She studied at Arkansas State University and later joined Western Illinois University. After that, Robert’s mommy enrolled at George Washington University. She was also a former basketball champion.

Despite having excellent academic qualifications, Roberts chose to change her career path and started working as a stripper. She used to work as a stripper in a nightclub in Washington, DC, and a few other known bars.

Navy’s parents Lunden Alexis and Hunter Biden first met each other at the strip club in Washington DC. At the time, Hunter and his first wife Kathleen just went their separate ways. And Navy’s father was dating his late brother’s widow Hallie Biden.

After their meeting, the then-striper Lunden went off to have an intimate relationship with Hunter. She soon got pregnant with Hunter’s child and gave birth to a baby girl.

However, the baby’s mama did not let the news come out publicly until her baby was a little grown up. She then made demanded Hunter pay for the child support as it was getting difficult for her to look after her child alone.

When the news broke out about Hunter’s child from his brief relationship with Lunden, the attorney denied to admit the paternity of their daughter. He even claimed that He has never slept with Lunden Roberts. However, many other employees from the strip club where Lunden used to work supported Lunden and also gave their witnesses to make the case in the favour of Navy’s mother.

Later, in October of 2021, Lunden decided to take DNA test reports to prove Hunter was her baby’s father.

As mentioned above, Roberts asked for a DNA test after Hunter’s initial denial to be the father of their child. At the time, the stripper said of her then-partner that Hunter is “not expected to challenge the results of the DNA test or the testing process.”

After the test results came out positive, Lunden decided to sue him for child support and also won the case. Hunter finally agreed to pay $2.5 million to Lunden as child support. After it is proved that Navy is the biological daughter of Hunter, the Biden family including Joe Biden agree to accept her as their part of their family.

Has Four Other Half-Siblings From Her Father’s Marriage

Before that, Hunter was married to Kathleen Buhle in 1993. Later, they parted ways in 2017. They had three kids together named Naomi Biden, Maisy Biden, and Finnegan Biden

Navy Joan Roberts is living her lavish life in Washington DC with her mother Lunden. Lunden spent a chunk of her money from Hunter to build their home there. She spent almost $2 million on the construction of the home.

Besides, the star kid Navy is also involved in sports activities like Tee-ball. Despite all the hurdles, Lunden thinks herself lucky for being able to be a mother.

Navy’s Mumma Lunden seems to be quite active on social media platforms. She is active on her Instagram handle under the name @lundentownn_. Likewise, she is also active on her Facebook profile.

She mostly shares pictures of her and her baby Navy Roberts. Luden’s followers adore the cute picture of the 3-year-old baby Navy and her mother. She also expresses her happiness of being a mother of a kid on her Instagram through her caption.

Was Born into Riches

The US attorney Hunter and Luden’s daughter Navy get to enjoy an extravagant lifestyle. As mentioned above, she got child support of $2.5 million from her biological father which is enough for her to have a luxurious life.