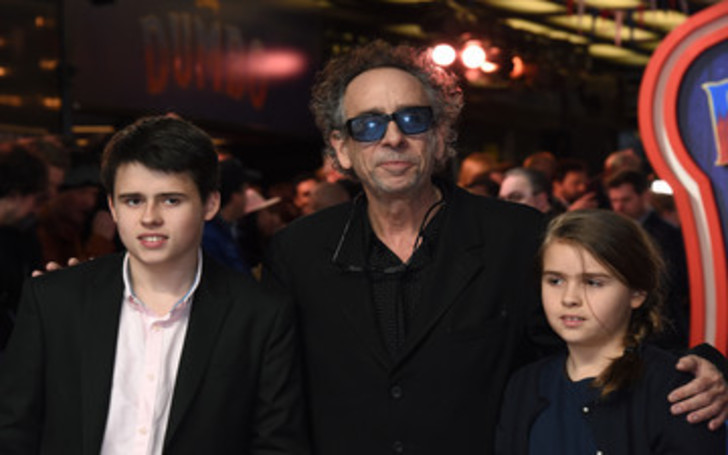 Nell Burton is a celebrity kid of the English actress, Helena Bonham Carter, and her director boyfriend, Tim Burton. Nell is the second child of Bonham Carter and Burton after their son, Billy Raymond Burton.

Born in the late 2000s, Nell is now a teenager. Her parents were together for more than two years albeit never married (before separating). Nell has appeared alongside her celebrity parents on far too many outings, both on and off the screen.

She has been in the films since she was in the stroller. So, is Nell still into featuring in movies? How has her life been being the child of a Hollywood couple? Know all these in the article below.

Nell Burton Has A Spanish And Jewish Ancestry

Nell was born on December 15, 2007. Maternal-wise, Burton’s grandfather was from a prominent British political family. He was a merchant banker and served as the alternative British director representing the Bank of England at the International Monetary Fund in Washington, D.C., during the 1960s.

Likewise, Nell’s maternal grandmother Elena is a psychotherapist. Her grandma had a nervous breakdown and was ill for three years. She is of Spanish and mostly Jewish background whose parents were diplomat Eduardo Propper de Callejón from Spain and painter Baroness Hélène Fould-Springer.

Nell’s late paternal grandfather, William “Bill” Burton (1930–2000) was a former minor league baseball player who worked for the Burbank Parks and Recreation Department. From her father’s side, Nell has a bit of German, Norwegian, Croatian, Polish, Russian, and Swedish lineage.

Nell Was Two When She Appeared In Her First Film

The daughter of Tim and Bonham Carter, Nell also has a few credits in films. The now 13-year-old has appeared as a Baby at Dock in Alice in Wonderland. At the time, she was just two years old. Afterward, she went on to star as the Girl at Station in Dark Shadows, and an Art Show Kid in Big Eyes.

Through her mother, Nell has seven cousins. Their names are Rosie, Maud Vanna, Tobias, Fred, Harry, Matilda, and George. Rosie Bonham Carter is known for films like The Heart Of Me 2002 and 2006 Home of The Brave (as an art director).

Nell’s other cousin, Fred is also in the film industry primarily working as a floor and set runner as well as an assistant director. He has also been an additional crew member in films like The Take, The Danish Girl, Cinderella, and Burnt.

Nell’s mother, Helena Bonham Carter, as mentioned is a well-celebrated actress. She is known for her work in independent films and large-scale blockbusters.

In Like Manner, Nell’s father, Tim Burton is a director and producer, known for his gothic fantasy and horror films. Some of his superhits include Beetlejuice, Edward Scissorhands, Ed Wood, Sleepy Hollow, Corpse Bride (2005), Sweeney Todd: The Demon Barber of Fleet Street, and Frankenweenie.

Tim has also directed the superhero films Batman and Batman Returns, the fantasy-drama Big Fish, the musical adventure film Charlie and the Chocolate Factory, and the fantasy films Alice in Wonderland, and Miss Peregrine’s Home for Peculiar Children.

Nell’s father has bagged nominations for two Academy Awards and three BAFTA Awards and wins for an Emmy and a Golden Globe.

Bonham Carter, on the other hand, had previously dated Kenneth Branagh.

After Planet Of The Apes, Tim and Helena went on to work together in many films. Some of them include films such as Big Fish, Charlie and the Chocolate Factory, Sweeney Todd: The Demon Barber of Fleet Street, and Alice in Wonderland.

The couple famously didn’t tie the knot during their relationship and unconventionally lived in two adjoining houses in London with their two children.

Burton and Bonham Carter split in December of 2014. In September 2015, the latter opened up about the breakup for the first time. Although she refused to publicly discuss precisely why she and Burton went their separate ways, she told that she “didn’t leave.”

Nell’s mom has since been dating Rye Dag Holmboe, a Norwegian writer and art historian who is 21 years her junior. In the past, Burton was married to Lena Gieseke, a German-born artist. The two went their separate ways four years after their marriage in 1991.

Pirates of the Caribbean actor, Johnny Depp, who is also Tim Burton’s constant star, is also the godfather to his children Billy and Nell Burton. Depp has long been close to both Nell’s parents. The actor has worked with Helena and Tim on countless films.

Interestingly enough, director Tim was having a conversation with Johnny during the filming of Charlie And The Chocolate Factory. The filmmaker, however, couldn’t ask the actor to become his son’s godfather. So, a couple of minutes later, the mother of Tim’s newborn son, Carter, spoke with Johhny on the phone on her partner’s behalf.

Bonham Carter said she once asked Prince William to be her daughter’s godfather while she was intoxicated, and he turned her down.

“I wasn’t that drunk, but enough drunk for me not to drink anymore,” Carter said during an appearance on Bravo’s “Watch What Happens Live” in November 2019. Burton’s mom revealed the royal responded to her in a joyful way.

As per the actress-mom, the royal told her: “You don’t want me to be godfather to your child.” She also revealed that she had met the Duke before his marriage to Kate. Bonham Carter then was staying on Mustique and got very drunk at one point. She then went on to ask the prince to be a godfather to his daughter to which Helena says, “He quite wisely said no.”

Nell’s mother reasons that when her son was born, she gave him eleven godparents all from the movie industry. She added when it came to her daughter, there were none. So she thought Prince William was a good choice.

While talking to the Guardian in October 2020, Nell’s mother discussed how she, Burton, and their kids were coping up with their separation.

The actress revealed their children, including Nell, were doing fine. She said Billy and Nell got to have had a dual life. Carter admitted how horrible it was for her to get used to, not having her children around [the shared custody]. Nell’s mom though revealed she also gets to enjoy some weeks off.

“Oh, I get this week off! Some parts are very much to be recommended,” said the CBE actress.