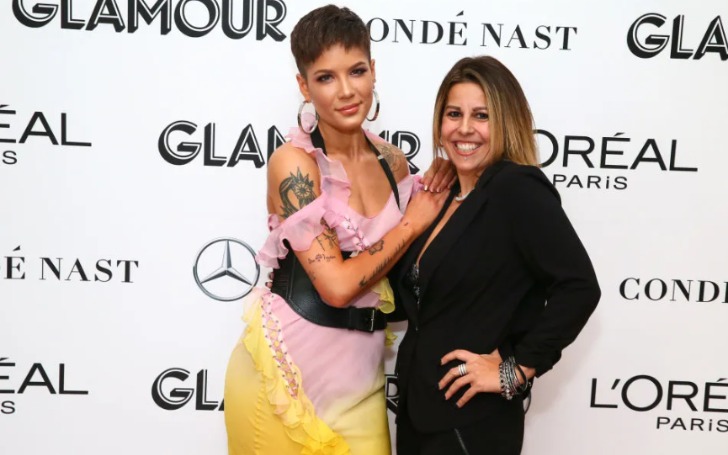 Nicole Frangipane is the mother of an American singer and songwriter Ashley Nicolette Frangipane, popularly known by the name Halsey. Her daughter Halsey is one of the most influential artists in the United States who has sold over 1 million albums till 2020.

Though Nicole is popular as a mother of Halsey, she obviously has her own journey just like every individual. So, today, the following article will shed more light on Nicole’s life details including her age, relationships, family, and much more.

Halsey’s Mom, Nicole Frangipane; What Is Her Ethnicity?

As of 2023, Nicole is 49 years old. She was born on July 20, 1973, in New Jersey, United States. She was raised in her hometown by her father Richard Jacobs and mother Annette Canace.

As for education, she first attended community college but she dropped out in the middle due to her pregnancy. However, after some time, she joined Fairleigh Dickinson University in Madison and completed her graduation.

Besides, with regard to ethnicity, Halsey’s mom is of Italian, Hungarian, and Irish descent. She holds American Nationality.

As said earlier, she is the daughter of Richard Jacobs and Annette Canace. Talking about her family background, her father Richard was the son of Steve Jacob and Lorraine Alice Christoff. Further, Nicole’s great-grandparents Frank Joseph Jacob and Maria/Mary Takacs were Hungarian.

Likewise, her mom Annette was a daughter of Vito Canace and Josephine Fortunata Minervino. She was of Italian descent with roots in Calabria and Campania.

Nicole is an Emergency Medical Technician by profession. She first joined her job as a medical technician on March 20, 2012, and till today, Frangipane is serving in the emergency medical field.

Amidst the COVID pandemic, her daughter once mentioned about her mom’s profession while raising her voice against the ongoing violence in her country through her Instagram. On June 1, 2020, she wrote,

My father is a black man. My mother is an EMT. This week I had to put those two associations together in ways that have horrified me.

Further, she is reportedly a Sales Associate in the Stanton Company Realtors in NJ. As per her company bio, Nicole is passionate about real estate.

Nicole’s Husband Chris Frangipane Is an African-American; Their Interracial Marriage

Nicole and her husband Chris Frangipane are together as a husband and wife for more than two decades as of now. Though the couple belongs to a different races as Nicole is white and her husband black, they didn’t let it affect their relationship. However, as a married couple, they went through a lot of hardship not because of their racial differences but by poor financial conditions.

Nicole and her better half Chris started dating when they were a college student in the early 1990s. And later, when the duo realized that, they are going to be parents soon both of them decided to drop out of college and probably got married in between. Since then, the couple is sticking to each other braving every obstacle and hardship that shows up in their journey.

Nicole Frangipane Is The Mother Of Three

From her courtship with her now husband, she became the mother of three children named Halsey (Ashley Nicolette Frangipane), Sevian Frangipane, and Dante.

Further, she welcomed her youngest son Dante in March 2005. He is currently 17 years old.

Nicole And Her Husband’s Relationship With Their Daughter, Halsey

At present, Nicole and her spouse share a beautiful relationship with their daughter Halsey. But it was not always like this before as the couple once kicked their daughter out of their home just because she left her college.

In an interview, Halsey once revealed the reason behind becoming homeless. She said,

But, at present, the couple has reconciled with their daughters. They share a beautiful relationship just as every parent and child usually do.

Her Son, Sevian Is An Activist; He Voiced Against Racial Discrimination In 2020

He graduated back in May 2020 from California State University and right after graduation, he became an activist. On June 6, 2020, he uploaded a video on his Instagram in which he protesting and captioned it,

“A post on your story is not enough. watching a documentary is not enough. makes some calls and make some signs. let’s continue to push for human rights because apparently ending racism is a debatable topic throughout this highly unjust country. Be strong. Be passionate. Be kind. Do NOT be silent.”

Two days later, his popular sister Halsey also posted a post on her social media saying that she is extremely proud of her little brother Sevian for finding a voice against racism.

Halsey’s mom Nicole once suffered from a mental illness called Bipolar Disorder. In fact, not only Frangipane but her daughter Halsey also suffered from Bipolar disorder. Both the mother-daughter went through such a harsh condition that they would support and encourage each other. Regarding her disorder, once Halsey said,

“The thing about having bipolar disorder, for me, is that I’m really empathetic. I feel everything around me so much… I used to say to [my mom] all the time, like, ‘I hate this.”

She further stated that her mom helped her to cope with the disorder and said,

Though Nicole never came forward to talk about her mental illness, her daughter openly advocate for people with Bipolar disorder.

Nicole Is A Grandmother

She has a grandson named Ender Ridley Aydin who was born on July 14, 2021.

Her daughter gave birth to Ender from her relationship with her boyfriend Alev Aydin, a writer and producer by profession.

After Ender’s birth, his momma posted his picture on her Instagram with the caption,

“Gratitude. For the most “rare” nad euphoric birth. Powered by love.”

Nicole mostly has shared photos of her grandchild and her daughter on her Facebook page.

Nicole’s Daughter, Halsey Is A Millionaire

Her daughter is a well-acclaimed singer and songwriter. As of 2023, Halsey has an estimated net worth of $20 million which she amassed through her thriving entertainment career. On the other hand, as an EMT, Nicole also must have earned a decent amount of money.