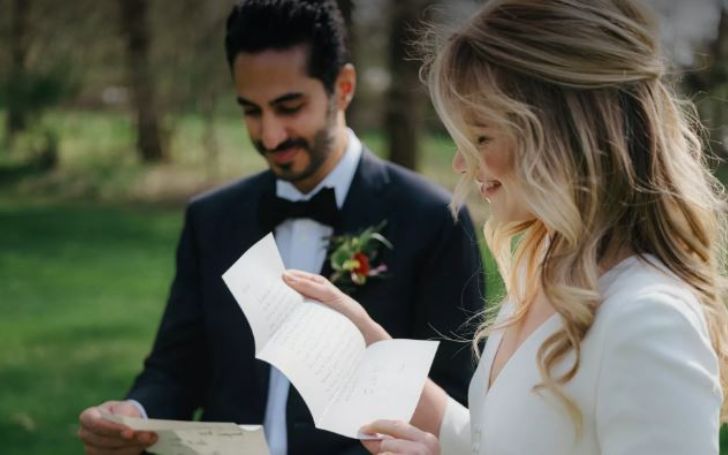 Nieku Manshadi is a pediatric dentist and a Doctor of Dental Surgery. He is also otherwise famous as the husband of the Texan-born actress, Elizabeth Lail. Manshadi’s wife Lail is the one who played Guinevere Beck in Netflix’s hit thriller You.

While not affirmed, Manshadi and Lail allegedly have been together since the mid-2010s; meaning the You actress was taken way before she would gain ground with the 2019 boy-chase-girl series.

Since her role as Guinevere in Netflix’s You, the entertainment goers have tried and extracted as much as possible about Lail. The proportionate ABCs of her husband, Manshadi, however, are yet to be addressed or even teased. So let’s try to decode the personal aspects of this raven-haired dentist in the headers ahead including his heritage, his relationship with Lail, their wedding, and further.

Is Nieku Manshadi An Indian?

Contrary to some rumors, Lail’s husband, Manshadi is not an Indian. He allegedly is of Iranian descent. Manshadi reportedly is also the youngest of four children.

His sister, Leila Manshadi, too is a doctor though it is unclear if she is also a dentist or not. Manshadi furthermore comes from the Baha’i faith. His parents, Mojgan and Farzin are originally from Tehran.

Lail, who is now 30 years old, says she and Manshadi met the good old-fashioned way. They reportedly laid eyes on each other at a mutual friend’s party in Williamsburg, Virginia. While they are yet to share the early stories of their relationship, it has been reported the two met in Sep 2015.

The two got engaged during the pandemic 2020 in Montauk New York in the month of August. Manshadi proposed to the Once Upon A Time alum with her grandmother’s ring.

Nieku and Lail married each other in April  2021 at Hasbrouck House in Stone Ridge, New York. This was also the place where they spent their first anniversary together. The house was previously an 18th-century mansion in the hamlet of Stone Ridge. The couple’s wedding included only about 22 guests because of the COVID-19. All the attendees were vaccinated.

The You alum said had it not been the period of COVID-19, she and her husband could’ve easily invited 200 people. In fact, Nieku and his then-fiancée at times even thought of postponing their nuptials due to the pandemic 2020.

But they went with whatever they could and ultimately were the only wedding party on property that Lail said gave them peace of mind to be in their “own little bubble.”

The Guinevere Beck actress sometime after the wedding to Brides.com said her big day with Manshadi ‘felt like a surprise party that kept revealing itself all day.’

A Bit More About Nieku And Lail’s Wedding

For their big day, the dentist-actress couple decided to have a weekend ceremony away from the city. Of her wedding destination, Lail said they felt right returning to a place from their story and sharing it with those that they love. Manshadi and his wife didn’t really have a strong vision for their union so they went with what “felt right and true to us.”

Lail in an interview later revealed the afterward of the wedding to her felt like an entirely intuitive experience. The couple admits as they went through the flow, more and more creatives kept coming over the course of their planning.

For the dress, Nieku’s bride approached UK-based designer Andrea Hawkes via Zoom in addition to the jewelry from Tiffany and Co. The gems were apparently gifted by Nieku’s mother. Manshadi on the other hand chose a dark navy suit from Freedmans Sporting Club and the dentist coupled it with a bow tie with Oxford dress shoes.

Nieku Manshadi Career As A Dentist

As mentioned, the Williamson native’s spouse now is a dentist certified by the American Academy Of Pediatric Dentistry. He also deals with patients with special needs. His job likewise includes providing advice on brushing, flossing, cleaning, healthy gums, and other dental habits for children.

Manshadi has also served in places as far as Ecuador and the Philippines to help treat people in areas with limited health care.

He is also the co-founder and clinical director of OrthoDent, Denton, Texas. Lail’s husband, Manshadi got his Doctorate of Dental Surgery degree from the University of the Pacific Arthur A. Dugoni School of Dentistry. He likewise did a two-year residency at the pediatric dental residency at Boston University.

Is Nieku On Social Media?

Further, Nieku also scarcely ever makes appearances on his spouse’s actively expressive moblogs. This has rightly led many to assume Nieku just might not be the guy with the preference to hover around the public greatness, unlike his performer wife.

How Rich Is Nieku’s Actress Wife, Elizabeth Lail; What Is Her Net Worth?

Lail was no newcomer even before her fame with You. Manshadi’s wife had already had enough camera experiences with series like Once Upon A Time, The Blacklist, and others.

Admittingly, however, it definitely was the Netflix thriller that pushed her to standard popularity, and being on hit streaming services’ projects obviously has its own kind of yields, especially for actors.

And although the cast salaries of You are yet to be talked about by the journals, the estimate suggests the series quite easily inflated the financial status of its leading stars including Lail, Badgley, Pedretti, and others. In addition to conclusively making them rich.

What Has Nieku Manshadi Wife, Lail Been Up to Since Leaving You?

While Manshadi’s partner, Lail was one of the leads in the hit series You, it’s been a while since the general audience saw her in anything of likewise stature. Lail may not have a similar level of fame as You, the actress though has appeared in a handful of other talked-about series albeit as a minor character.

Post the You fame, Nieku’s actress wife played Quinn Harris, a hospital nurse in the 2019 supernatural horror film, Countdown. The film, while critically, failed, still managed to land $48 million worldwide against a budget of $6.5 million.

Elizabeth then, in 2021, landed a part of a recurring role as Lola Morgan in the HBO drama series, Gossip Girl. That same year, Lail would also become the lead star in NBC’s drama series, Ordinary Joe from the screenwriter, Matt Reeves. The Blacklist alum’s most recent project is Katie Aselton’s comedy-drama, Mack and Rita, alongside Diane Keaton, Taylour Paige, and others – which though, is currently under post-production.