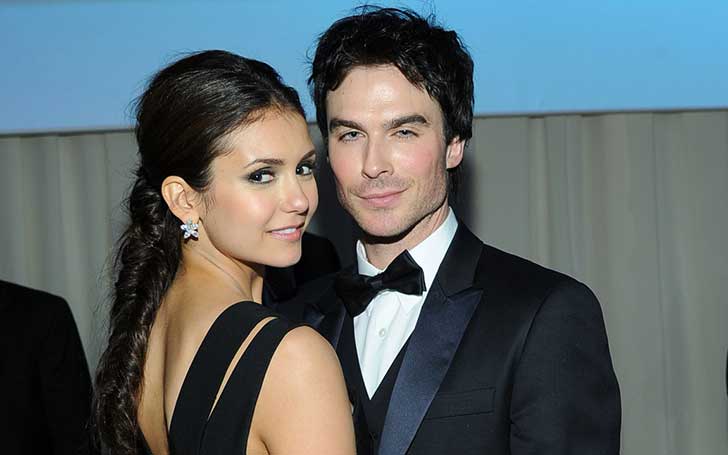 It is no secret that The Vampire Diaries costars Nina Dobrev and Ian Somerhalder were a real-life couple.

But, many of their fans are still curious to know how the ex-couple met and how love blossomed between them. Moreover, many are still confused if Nina Dobrev’s dating Ian at present as well.

So, let’s have a closer look at Nina Dobrev and Ian Somerhalder’s relationship; from their first meeting to their breakup.

Nina Dobrev and Somerhalder first met in 2008 on the set of The Vampire Diaries. Despite both of them had been a prominent figure in the entertainment industry for a long time, they never crossed their paths before they were cast in The CW series.

The Canadian actress played dual roles of Elena Gilbert and vampire Katherine Pierce while Somerhalder played one of the Salvatore brothers.

May 2009: They Went Out Together for the First Time

Soon after their first encounter, Dobrev and Somerhalder became friends. And just months later, the couple was spotted together out of the set for the first time. On May 21, 2009, they hit up The CW’s Upfront party at the Gramercy Park Hotel, New York.

They hadn’t started seeing each other by then. Moreover, Nina told Teen Vogue that she had never dated her costars.

March 2010: Nina and Ian were Caught Kissing at LAX Airport

People started considering Nina Dobrev and Ian Somerhalder a couple after they were snapped kissing at LAX Airport in early March 2010.

Later, Nina said that the pair had expected to hear rumors about their relationship after the incident.

May 2010: They Enjoyed an NBA Match at the Staples Center

By May 2010, Nina and Ian had started making their public appearances without their The Vampire Diaries costars.

On May 27, 2010, the alleged lovebirds made their appearance at the Staples Center where they enjoyed a basketball match between LA. Lakers and Phoenix Suns. Their fans were convinced they were an item after the match.

Later, an eyewitness told Us Weekly that Dobrev and Somerhalder “looked flirty” as they watched the match together.

June 2010: Their Friend Confirmed They Were Dating

Weeks after they watched a basketball match together, Nina and Ian made their appearance at the Monte Carlo Television Festival at the Grimaldi Forum in Monaco. There, the Anomaly star wrapped his arm around Dobrev.

After the event, a close friend to the couple told Us Weekly that they were “the real deal.”

April 2011: Ian Talked about His Girlfriend on Media

Nina Dobrev and her boyfriend Ian went to the White House Correspondents’ Association Dinner in the American capital on April 30, 2011. There, the newly minted couple also posed for a joint photo.

At the party, Somerhalder talked about his girlfriend with Us Weekly. He said:

“Her desire to experience and appreciate everything around her, and chuckle and enjoy it, is great.”

One week after Nina and Ian celebrated the renewal of their series The Vampire Diaries at the CW Upfronts, the lovebirds were spotted enjoying their time in Europe. The actor-duo enjoyed their time in Paris alongside their mothers.

They visited the Saint German de Pres. Later, Somerhalder took to his Twitter writing: “Thank you for the warm welcome. It’s really amazing.”

January 2012: Traveled Together from LA to The Vampire Diaries Set in Georgia

On 11 January 2012, Nina Dobrev won a People’s Choice Award in LA. Somerhalder was also by her side when she picked up the accolade.

Following the show, she and her boyfriend flew back to their series set in Georgia.

On May 14, 2012, Dobrev and her beau were spotted holding their hands while they walked through NYC’s Soho neighborhood.

Alike 2011, Nina and Ian went on a vacation to Paris, however, their mothers weren’t with them this time. Instead, they were accompanied by their The Vampire Diaries crews.

There the lovebirds and their friends celebrated their executive producer Julie Plec‘s birthday. The other day, Nina went out for shopping at Louis Vuitton alone.

Nina Dobrev and Ian Somerhalder were pictured together as they went out for Christmas tree shopping in Atlanta, Georgia in early December.

May 2013: Nina Dobrev and Ian Somerhalder Broke up after Three Years

After around three years-long romance, Dobrev and Somerhalder broke up in early May 2013. A source close to the pair revealed their split to Us Weekly.

The source also revealed that Ian and Dobrev would continue working together and remain best friends after their breakup.

Who is Nina Dobrev Currently Dating?

As of 2020, Canadian actress Nina Dobrev is dating American snowboarder and skateboarder Shaun White. The couple started dating in early 2020. They sparked their romance rumor in March after they went on bike riding together in Malibu, California.

The newly-minted lovebirds also spent their quarantine time together. On May 28, Nina took to her Instagram sharing a couple of photos of her and her new boyfriend, in which she can be seen giving White a haircut.

As per Ranker, Nina’s first known relationship was with actor Ben Hollington whom she dated from 2006 to 2009.

Following Somerhalder’s break up with actress Dobrev, he started dating actress Nina Reed. The lovebirds started dating in 2014 and around a year later, on 27 April 2015, they exchanged their vows in Malibu.

A couple of years after, the husband-and-wife welcomed a baby girl. They gave birth to their daughter, Bodhi Soleil Reed Somerhalder, on July 25, 2017.