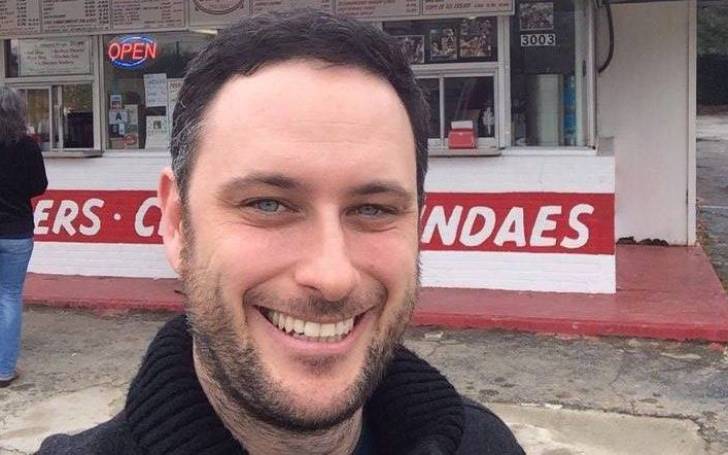 There are a few celebrities spouses who are as famous as their partners in their respective careers. Noah Galuten here is a fine example of that.

Noah’s wife Iliza Schlesinger is quite famous around the world as a comedian. Nevertheless, he too has his own sets of loyal fans over the year. For those of you who don’t know him, well, he is a great chef as well as a renowned cookbook author.

Apart from his professional life, there are many aspects of Noah’s life that many of you might not know. For instance, do you know his father is a Grammy award-winning music producer? To find more interesting facts about him, scroll down below!

Who is Noah Galuten? Why is he famous?

Noah is an American cookbook author, food blogger, and a chef. He gained early fame through his blog site, ManBitesWorld, where he used to write all things food. From the blog, Noah’s sole goal was to, “strive for authenticity,” which according to him, “often difficult to gauge.”

He was quite passionate about the whole idea because of which he invested his whole money and time into the blog. In a single day, he used to visit more than a dozen different ethnic restaurants.

In October 2012, Noah joined the Tasted YouTube channel. He was introduced as The Food Feeder. The channel was a huge success but due to varied reasons, it shut down in 2016.

Apart from this, he also worked as a pitmaster at the renowned, Bludso’s Bar & Cue in Los Angeles. In addition, Noah was a waiter, bartender, and manager in several restaurants.

An Ironic Twist: Noah majored in Drama but became a chef instead

Noah has studied at the University of California and majored in theatre arts. He even tried his hands in the art field and did some playwriting before venturing into blogging. He graduated from the university in 2004. Before joining UCLA, he graduated high school from Santa Monica High School.

Upon graduating, he moved to New York in order to further his career in theatre before coming right back to his native California for his girlfriend. Unemployed and stressed out, Noah, during his time in LA, decided to open a blog that catered to his passion for food. The blog was a big hit.

Noah was born on September 21st, 1982, in California. He is the son of legendary record producer, Albhy Galuten and his ex-wife, Nancy Lyons. Talking about Noah’s religion, he is Jewish.

Many of you might not know that Noah’s dad Albhy is the man behind producing the record-breaking Bee Gee’s album, Saturday Night Fever. The album is certified 17x Platinum. In addition, he has 18 number one singles on his name as well. For his work, he won two Grammy Awards, a Dramalogue Award, and a BMI award.

Apart from his music producing accomplishment, the man is an inventor as well. Till now, he has 20 patents registered in his name. Talk about multi-talented.

Besides, Noah’s mom Nany is currently married to musician Jimmy Haslip since April 1994. Moreover, she works as a landscape designer and beautifier who is based in Los Angeles.

Noah’s parent’s divorce and mom remarried: He has one biological and two half-siblings

After several years of marriage, Noah’s folks decided to divorce each other. From their marriage, the former flames welcomed two children, Noah and Jason Galuten.

Noah and Jason also have two half-siblings from their mom, Nancy’s other marriage. One sister, Gabriel Haslip, and one half-brother, Elliot Batson. She shares the two from her current marriage with Jimmy.

Jason is a software developer at the San Francisco Bay Area. He currently works at ACKme Networks as a software engineer. Just like their father Albhy, he too graduated from Berklee College of Music.

Noah Galuten is married to comedian Iliza Shlesinger: All the intricate details here!

Noah and his girlfriend Iliza got married on May 12th, 2018, at South Park City Center in downtown Los Angeles. It was an extravagant affair with numerous people in attendance. The Girl Logic author told US magazine, “We’re keeping our own last names because Shlesinger-Galuten is a nightmare.”

As for the wedding dress, Iliza looked beautiful in a Monique Lhuillier dress. In sheer contrast, Iliza also wore Nike sneakers that had 534 rhinestones individually glued on top of it. On the other hand, Noah kept it simple with a black suit and a kippah.

It was no surprised the wedding had lots of delicacies. One of Galuten’s close friend and chef Jeremy Fox overseed that department. There was a wide variety of dishes including peas and pecorino, beets and berries, and smoked black cod with a green garlic ravigotte.

Noah proposed Iliza a year before the wedding

The duo announced their engagement in May 2017. In a picture shared by both of them on their Instagram profile, Shlesinger is looking absolutely surprised as Noah stands behind her.

Prior to their engagement, the duo first met in an online dating app. After a few strings of chat, they finally mustered up the courage to meet. They went on their first date in July 2016.

Talking about their first date, they went for a movie, and then Iliza asked Noah if he’d like to come to see her comedy act. He said, yes. After the show ended, they went around 4 bars and she then invited him to her apartment. However, they didn’t have sex on that day, but they did make out.

How much is Noah Galuten’ Net Worth?

As of 2020, Noah’s net worth stands at a whopping $2 million. He has earned such a substantial amount of money from his varied ventures including restaurants, cookbooks, and blogging.

Noah currently co-hosts the Dont Panic Party alongside his wife. In addition, he also a long stint with Tasted where he hosted several shows including Chopped.

In the meantime, Noah’s spouse Iliza has a total fortune of $5 million. She recently put her Laurel Canyon, LA, house for sale. The asking price is $2.895 million. She had purchased the crib for around $2.8 million.