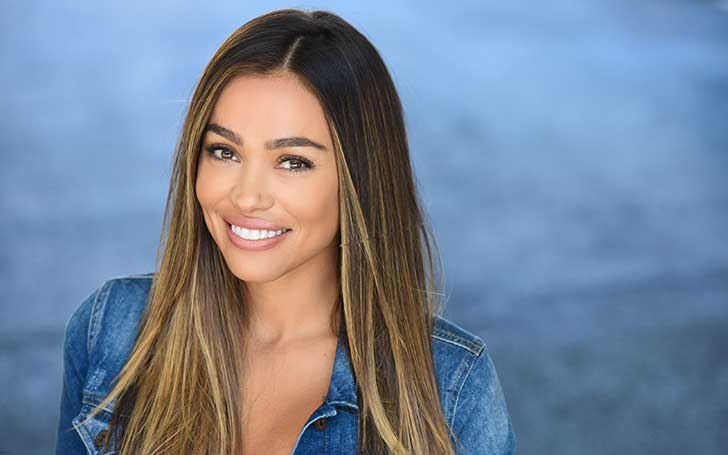 October Gonzalez is the wife of former NFL star and sports analyst Tony Gonzalez. The couple has been married for over a decade and is living their life happily with three kids. As a wife to a former athlete and being a television personality, October’s lifestyle and married life to Tony is pretty open in the media. However, her life before she met her husband is pretty less talked in the media.

Born and raised in a middle-class family, October faced several challenges in her childhood days. Rising up off the hurdles, she went on to become a wonderful wife and mother.

October Gonzalez has One Sibling

October Gonzalez was born as October Calinda Vegas-Russell on 10 October 1980 in Los Angeles, California. She is the daughter of the famous ’70s singer Pattrick “Pat” Vegas who is famously known for the song “Come and Get Your Love.”

Her Mother was a Drug Addict

In her appearance on her husband, Tony Gonzalez’s podcast, October revealed that her mother got addicted to Heroin while young. She said her mother was also a singer like her father but she ruined her career after she addicted.

Her mother and biological father, Pat split and after that, her mother got married again. October’s mother gave birth to a girl with her second husband. However, since she was a drug addict, she couldn’t take good care of any of her kids. Instead, October went on to say she had to take care of her mother and sisters.

Her mother passed away from a drug overdose while October was around 15 years old. Following her mother’s death, she went on to live with her aunt in Orange County.

Her Nanny Married her Dad

October remembers she was in kindergarten when her mother and stepdad hired a babysitter named Ascella. She said Ascella moved in with them later and stayed there for around a year. October said Ascella suddenly disappeared from their house and as a kid, she had no idea where she went.

Years later, she forced her mother to take her to visit her biological father. When she reached her father’s house, she was amazed to see Ascella there. October later understood her father had married her nanny. She also revealed that her mother had set up Ascella with her father.

Following October’s mother’s death, her father Path had a divorce with his wife Ascella. Following their divorce, Ascella and October’s step-dad started dating and they eventually got married. Further, the married also gave birth to a daughter, October’s youngest half-sibling, a sister.

She Studied at Univerisity of Texas

October completed her high school from West Brook Senior High School and then enrolled at the University of Texas at Austin. She started singing in her college days. As per Famous People, she had already obtained licenses in the field of cosmetology and bartending by 2012.

She Pursued a Career in Singing

While she was in high school, she started singing and she gave it a continuity in college as well. Afterward, she wrote and sold a few songs and had some production contracts as well. But October ended her singing career short after finding it difficult with the men in the industry.

She shared that at the starting of her career, she went to New York for an audition. There she found herself in a predicament where a man she was there with had gotten only one room for them thinking she would agree to stay with him. But she denied it straight away and demanded a single room.

She said she wasn’t ready to compromise for a deal or contract so she decided to step out of her singing career.

She Found Success in her Career as a Television Personality

October started pursuing a career in television pretty late. She was 29 years old when she made her first television appearance in 2009 in the documentary series ‘E! True Hollywood Story.’

After a couple of years of hiatus, October returned to television as a co-host of the TV show The View in 2014. Afterward, she made her appearance on the popular television series, Rachel Ray. Later, in 2016, October appeared as herself in FabLife.

October got the biggest break of her career in 2017 when she was cast in an important role in the game show Beat Shazam. Later that year, she also made her appearance in some other television series including Daily Pop and Home & Family.

October was in a serious relationship at the time she had an encounter with her current husband, Tony. She dated the guy for around five years before she broke up. October said her ex-boyfriend was a baseball player and this relationship was her first love so she wanted this relationship to work forever.

But, her then-boyfriend was a short-tempered man who was physically violent to her sometimes. October added her ex was a great guy at the beginning but later he turned a little more “possessive and controlling and little violent.” She went on to say that she initially thought she could change the man. However, in the end, she realized she couldn’t change him and then decided to end the relationship.

October and Tony Got Married in 2007

October Gonzalez has been happily married to her husband since 2007. Gonzalez and Tony dated for more than four years before they walked down the aisle on 20th July 2007. But the couple called their marriage a “commitment ceremony.”

Tony said he was scared of the fact that more than half of the marriage ended in divorce. So, he didn’t want to get married to October legally. He further said he wanted to spend the rest of his life with October, however, he scared if getting married legally will ruin their marriage in a couple of years.

More than a decade after exchanging their vows, October and Tony got married legally in 2019. Tony revealed on his podcast with his wife that they were legally married.

How October and Tony Started Dating?

October and Tony came across when she was working as a waitress at a bar owned by Dennis Rodman. She was 21 years old at that time and was in a serious relationship with her boyfriend of four years. Still, October says when she talked with Tony in their first meeting she felt comfortable talking to him.

After around a year, a mutual friend of them, Doug, called Tony and said Tobie “October” was single. Then Tony reached the bar and asked her out. They started dating soon, however, they were dating on and off for a couple of years.

Tony said he fell in love with October when he heard her singing at a restaurant where the couple was with her friend Stephanie. Since then, the lovebirds started dating seriously and after a couple of years later, they got married.

Meanwhile, in 2007, Tony Gonzalez suffered from Bell’s Palsy disease due to which he had his face paralyzed. Tony was still suffering from facial paralysis when he got down to his knee and proposed to his then-girlfriend.

They Gave Birth to Two Children

Less than a year after October and Tony’s marriage, they welcomed their first child, a daughter, Malia Gonzalez. A couple of years later, they gave birth to their second child, a son, River Gonzalez. Meanwhile, Tony has a son, Nikko Gonzalez from his relationship with his ex-girlfriend and news anchor Lauren Sanchez. Lauren is dating Amazon head, Jeff Bezos, at present.

Besides October and Tony Gonzalez’s two children, Malia and River, they have an adopted daughter, Sophia Gonzalez. In fact, Sophia is October’s younger sister, Noel’s daughter with her boyfriend. October said her sister Noel grew up in foster care due to their poor family condition.

Growing up there, she became pregnant young but she couldn’t raise her children herself. October went on to say Noel has had five kids and she put them all up for adoption. Noel wanted to raise her last kid, Sophia herself, however, she couldn’t and she called her older sister October to take her baby to their home for a couple of days.

October and Tony gave Sophia back to Noel, however, she couldn’t take care of her so they took back to their house and started raising her as their kids. Sophia was born on December 10, 2014, and she just graduated from preschool in May 2020.