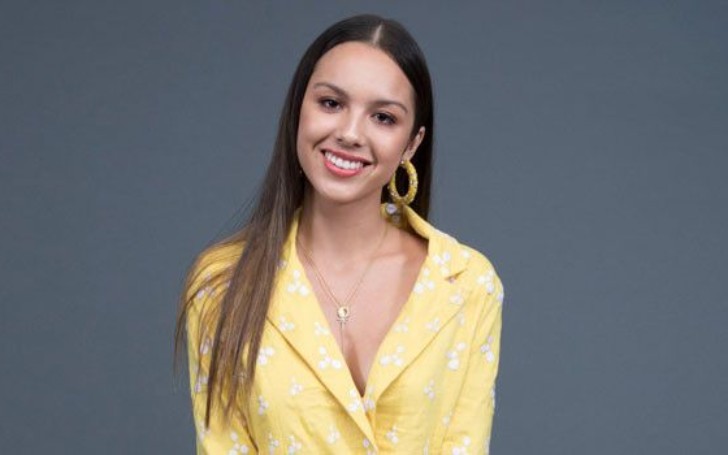 Bizaardvark star Olivia Rodrigo has been a fan favorite since appearing in the Disney show. What’s more, her relationship with Ethan Wacker also drew a lot of attention.

But these days, the couple doesn’t share pictures together. Have they broken up? Is Olivia Rodrigo dating a new boyfriend? Let’s find out more!

Who is Olivia Rodrigo Dating in 2020?

At the moment, Olivia is relishing her single life. Since breaking up with Ethan, she is not linked with anyone else. Nevertheless, there was a guy with whom she shared a rather cryptic picture of herself.

The guy goes by the name Colin Haskins. On August 31, 2019, she added a picture with him. What’s more interesting was her caption which read, “happy belated birthday angel bb I’m so sorry my Instagram was locked lol @colinhaskins ❤️“

The heart emoji and Olivia calling him BB raised many doubts. Fans even asked if they were dating in the comment section for which there was no reply by Olivia.

But since then she never shared any picture of him meaning the pair is most probably friends and nothing else.

Olivia and Ethan announced their relationship in early 2019 sharing a sweet Instagram post. However, as it turned out, they were dating for a little over 6-months before revealing the big news.

The couple was definitely a relationship goal for many. From partying to spending time together, there weren’t many things the love birds did without each other.

Not only that, but they also used to go on various romantic dates which included ice-skating, hibachi dinners, etc. Sadly, their beautiful relationship wasn’t meant to be and they broke up a few months into their affair.

Why did Olivia Break-Up with Boyfriend Ethan?

Despite having a dream-like relationship, Olivia and Ethan broke up. Although there was no official confirmation about their break-up, sources suggested they went their separate ways months after the initial confirmation.

It looks like the pair had some differences between them which led to their untimely split. Moreover, the lovebirds even deleted all of their PDA-filled pictures from their respective Instagram accounts.

On the contrary, Olivia and Ethan still remain friends and recently Olivia congratulated her ex-boyfriend after he got into a college. The actress added a story applauding Ethan and wrote, “Ahhhh I’m so proud! He’s the best!”

At the beginning of 2020, various tabloids reported Olivia is going out with her co-star, Joshua Bassett. It all began when both of them started appearing on each other’s social media handles, a little more than usual.

In addition, they even had surnames for one another. Oliva would call Joshua “Joshy” whereas, he’d refer to her as “Liv.” Similarly, in one of the interviews, Joshua maintained he improvised the famous proposal scene with Rodrigo in High School Musical: The Musical.

In the scene, where he says, ‘I love you’ to Nini, Olivia’s character, he apparently tweaked it a bit just so it could reflect their off-screen relationship. Luckily, his improvisation worked and Oliva literally teared up.

Sorry to burst your bubble you guys but the on-screen pair are not dating in real life. While attending a Disney red carpet event, both of them finally talked about the nature of their relationship.

When ET asked if they were dating, both of them gave a resounding ‘No.’ Furthermore, Olivia also talked about their chemistry. She said, “We have a lot of chemistry but we’re just best pals.”