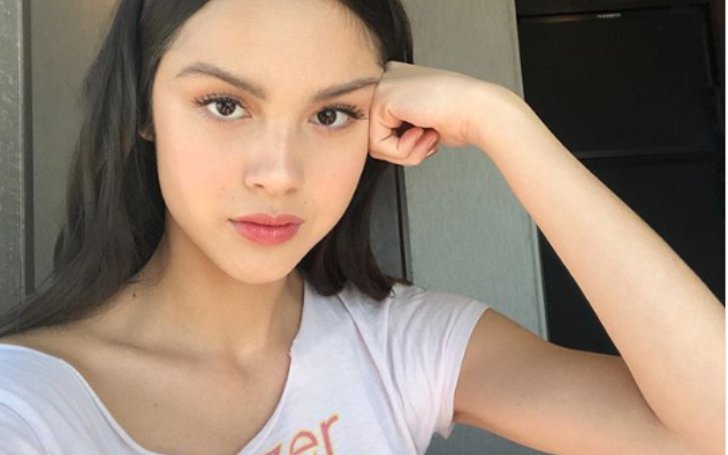 American actress and singer, Olivia Rodrigo is popular for her roles as Paige Olvera on the Disney Channel series Bizaardvark. The 17-year-old carved a big name out for herself in the entertainment field after working in the Disney TV series.

Rodrigo is appearing in High School Musical: The Series since 2019. Besides her profession, the rising American star is famous for her relationships including with the fellow Bizaardvark star Ethan Wacker. So, let’s find out all the interesting things about Olivia Rodrigo’s life here.

Who is Olivia Dating? Details on her Past Relationships

Olivia Rodrigo is not dating anyone currently, however, she was in a very public relationship with an actor. The actress dated her Bizaardvark co-star, Ethan Wacker.

They were in a relationship since 2018 but announced it only in 2019. Sadly, the lovebirds couldn’t hold out longer and called it quits a few months after the initial announcement.

Nevertheless, both of them remain good friends and recently Olivia congratulated her ex-boyfriend after he got into college.

Moreover, she was also linked with her High School Musical co-star, Joshua Bassett. Their on-screen chemistry gave rise to their romance rumor, though both of them denied having an affair.

Meanwhile, Rodrigo was also speculated to be together with a guy named Colin Haskins. The speculations sparked in August 2019 after she took to Instagram to wish Haskins on his birthday. “happy belated birthday angel bb I’m so sorry my Instagram was locked lol @colinhaskins ❤️,” wrote Olivia on her August 31 post. Here is the post:

But the actress never shared her photos with Haskins ever and she hasn’t talked about her relationship with him as of yet. So we can say that the two are not more than good friends.

Who is Olivia Rodrigo? Why is She famous?

Olivia is an American actress revered for her role as Nini Salazar-Roberts in the Disney series High School Musical: The Series. She also portrayed Paige Olvera in Bizaardvark.

In High School Musical, she is joined by Joshua Bassett, Kate Reinders, and Sofia Wylie. The show has been renewed for the second season by Disney+.

In addition to being an actress, she is an accomplished singer and released a couple of singles including All I Want, Wondering, and Just for a Moment.

Prior to working as a fully-fledged actress, she first appeared in the Old Navy commercial.

Where did Olivia Study? Plans on going to College

Olivia studied at Dorothy McElhinney Middle School in Murrieta, CA. Before moving to middle school, she went to Lisa J. Mails, an elementary school, where she participated in many theater programs.

After she scored an acting job in An American Girl: Grace Stirs Up Success, Olivia stopped attending her school. As for her future, she plans to study further and study fashion and women’s studies.

Olivia Rodrigo Parents: What is her Ethnicity?

Olivia was born and raised in Temecula. She grew up in a mixed culture of American and Filipino. In one of the interviews, Olivia mentioned that growing up, their family used to make many Philippines cuisine like Lumpia on Thanksgiving.

Meanwhile, her father was raised in a complete Filipino household as both of his parents were from the Asia-Pacific island country. His grandfather used to converse in Tagalog and he also speaks the language.

Despite being a half-Filipino, Olivia has never been to the Philippines, though it remains on her bucket list. What’s more, many of Olivia’s family members still live in the country.

Take a look at Olivia talking about her Asia Pacific Heritage!

Her Great Grandfather Moved to the USA via Boat

Olivia’s paternal great-grandfather from her grandma’s side moved to America when he was just a teenager. He traveled to the country via boat.

An avid gardener and a cook, before his demise, he passed the Filipino heritage to his kids who passed it down to theirs.

Does Olivia have any Siblings?

So far, there has been no evidence of Olivia’s brothers or sisters. Likewise, she never talked about having any siblings so it is safe to say, she is the only child of her parents.

What is Olivia Rodrigo Net Worth?

As of now, her net worth stands at $300,000. Her total wealth is huge considering her age and it will definitely grow later on.

Olivia started her career back in 2015 in her debut Direct-to-video film, An American Girl: Grace Stirs Up Success. Since then, she has worked in three other TV shows and carved out a big name in the entertainment industry.