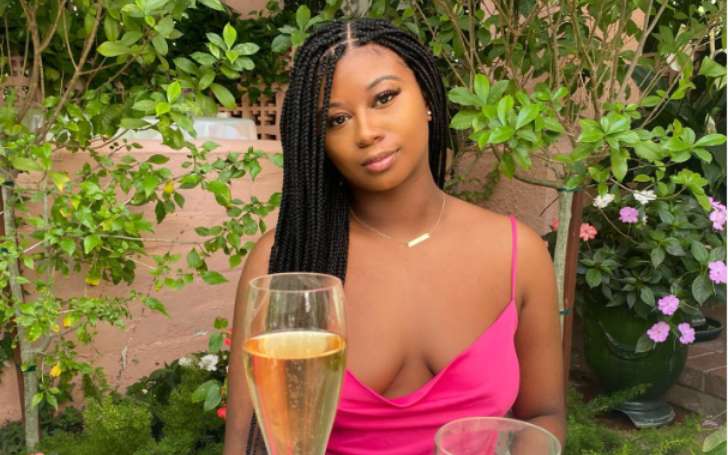 Omoye Assata Lynn is famous as a celebrity daughter of the popular American rapper and actor Lonnie Lynn (aka Common). He has given hits like, “Love of My Life,” “One Day It’ll All Make Sense,” and “Can I Borrow a Dollar,” to name a few. Besides, her father is also a winner of two Grammy Award and a Golden Globe Award.

Many of you may not be aware of this fact, but Omoye’s mother left her with her dad when the star kid was just one year old. Omoye is the only child of her dad and was raised by him as a single parent. Common has been taking care of his little one making sure to play both parts of her mom and dad. However, since her parent’s break-up, her father hasn’t married despite being in a relationship with several stars.

On the other hand, the star kid always aspired to become a lawyer. Following that, Omoye Lynn has recently graduated from law school; one step further to pursue her dream. So, what is her further plan? How is her relationship with her dad? Besides, also know if Omoye is dating anyone at present or not.

Read the piece below to explore more about Common’s daughter Omoye Lynn.

What Is The Meaning Behind Omoye Assata Lynn’s Name? Her Early Details

Omoye was born on August 13, 1997, in Chicago, Illinois, United States. She is 25 years old as of 2022. Moreover, Lynn belongs to the mixed ethnicity of African-American descent and holds an American nationality.

Talking about the name of the celebrity child, Omoye Assata’s name has a beautiful meaning to it. According to her father, Omoye is a Nigerian word that suggests “blessed baby” as she was a blessing to his life. Also, Assata was a kind of tribute to Assata Shakur as he believed his “daughter was destined to become a fighter, even a revolutionary.”

Yes, the 25-years-old graduated from the law school at Howard University in 2022. Following her graduation, her proud dad Common posted on his Instagram to express his happiness by writing,

“There are no words to describe how proud I am! Finishing Law School at Howard University in the 3 years is pretty AMAZING! Congrats to my daughter and all the graduates of 2022. Now go out in the world and be great!”

Even prior to this, the rapper also congratulated his daughter back in 2019 when Omoye graduated from Howard University. He then uploaded a photo of his daughter and wrote,

Congratulations to my phenomenal and dynamic daughter. It lit my heart and spirit to see you graduating from the great Howard U. Continue to achieve. Continue to soar Continue to have fun. I Love You. Blessings to the class of 2019!

Who is Common’s Baby Omoye’s Mother?

Well, we all are aware of who Omoye Lynn’s dad is, however, the information about her mom is harshly known. Omoye Lynn’s mother’s name is Kim Jones.

Her parents Common and Kim were in a relationship for some time. But, the ex-mates couldn’t make it to their nuptials. The former couple dated for a few years and welcomed a beautiful daughter during their love in bliss.

Nevertheless, as things didn’t work in line for the two, Kim Jones broke up with her then-boyfriend leaving her one-year-old child behind him.

Omoye Assata Lynn’s Father Is Not Married Yet

After Omoye’s parents parted ways, the law school graduate was then only left with her dad and raised by him as a single parent. Whether it was because the singer didn’t feel the urge to or didn’t find the perfect mother for his child, her dad has never married since his break-up with his then-girlfriend Jones.

On the contrary, the Love of My Life singer has been in many romantic relationships. The father of one was rumored to date Angela Rye in 2017 breaking up with her in 2018. Even before that, Common was in a love affair with singer Erykah Badu, actress Taraji P. Henson, and Tennis player Serena Williams.

Later, the rapper was romantically involved with Tifanny Haddish in 2020. Their relationship became a matter of concern for many media outlets. But, their love affair couldn’t sustain more than a year as they separated in 2021.

Having said that, Common on his Instagram had posted a post on her birthday mentioning her as “Love,” so maybe, the couple will get back again. Still, we aren’t sure of that.

Omoye’s Daddy Dedicated a Song For Her

During Lynn’s birth, her father was preparing for his second single rap album Retrospect For Life, in 1997. He then dedicated one of the tracks “One Day It’ll Make Sense” to his daughter.

Even though it is not one of the best of his collections, this song is very close to his heart. The theme was allegedly about the choices of abortion and birth for a woman impregnated by Common. He further tells the hard times the artist was through during his daughter’s arrival.

Common’s Daughter Omoye Assata Lynn Is Not His Big Fan; He Had a Tough Time Raising Her

Omoye is a big-time music lover just like her pop. Yet, her dad is not her favorite. She likes to listen to different themes of music than her dad. Rather, Lynn is into Chance and Beyonce.

In an interview with LIVEKellyandRyan, Common was asked if his daughter admires his music. It was when the artist opened up that his little girl is not really a big fan of his songs. He further said she went to a Beyonce concert with a bit of an open outfit which he didn’t like much.

Besides, the American rapper also opened up about the challenges he faced as the dad of a teenage girl. Common said he wanted to be a good dad and give her all the freedom. Therefore, at times even when she did something he didn’t like, he let it go. He knew stopping her won’t be a good idea, so he let her do what she likes.

Omoye And Her Father Common Had a Therapy Session Together

Nothing goes perfect in one’s life. There are always ups and downs that we have to work through. So, the father-daughter once had to take a therapy session together.

It all happened after the Golden Globe Award winner learned his daughter felt he hadn’t tried hard enough to be in her life more. He later told People they even got into tears after one late-night conversation.

In the same interview, the music star further said that his daughter Omoye once questioned him about how much he cared about her. He said,

“It kind of shocked me because that’s the first time I had ever heard it.” I was like, “What do you mean?”

After she asked him, the two talked about their feelings and how she felt abandoned since her childhood. However, the father tried his best to convince her it was nothing like that. He also admitted not being able to be with her all the time as he has to handle his career side by side to take care of her and the family.

After the discussion, the celebrity kid and her dad decided to see a therapist. They went through a therapy session together and found out it brought positive changes in their relationship. In conclusion, the decision of taking therapy sessions somehow worked for them, and “it’s been good” these days.

Is Omoye Assata Lynn Dating Anyone?

No, there is no information of Omoye involved in a love relationship with anyone at present. Maybe, the star kid was too busy studying to complete her graduation.

However, back in 2015, Omoye uploaded a picture alongside her family on her Instagram. She was dressed in a white gown and white gloves with a bouquet of red roses in her hand. She looked like she was wearing a bridal set. Still, she was just 18 years old in 2015, so, she only might have attended some functions.

On the other hand, her dad Common has a huge number of followers with 3.9m on Instagram, 3.6m on Facebook, and 5.4m on Twitter. All his social media handles are under the name “Common.”

Since Omoye has just completed her graduation, she is not professionally active in any career at present. Nevertheless, she may soon start earning for herself.

Meanwhile, her father, a musician, actor, and activist Common has a net worth of $45 million.