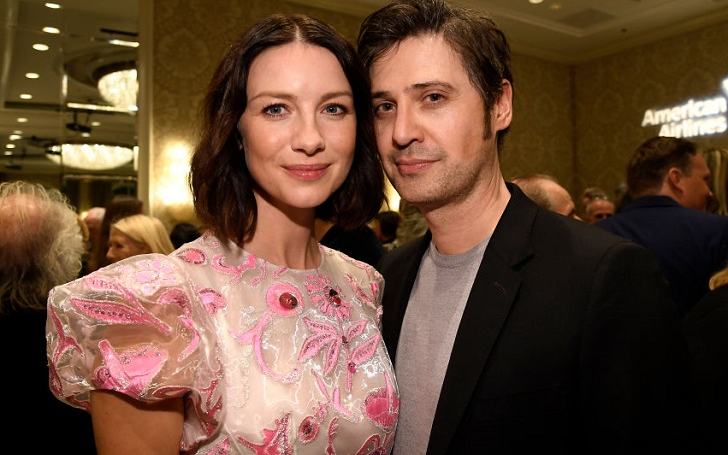 The actress announced her marriage with her musician-hubby Antony “Tony” McGill back in 2019. But the fans are now curious to know are Tony McGill and Caitriona Balfe still married?

Let us try to find out everything about their hush-hush married life!

When Did Caitriona Balfe and Her Husband Tony McGill Get Married? Their Stunning Wedding

Balfe tied the knot with Tony McGill, a music producer on 10th August 2019. Their low-key wedding ceremony took place at  St. Mary’s Church in Bruton, Somerset, in the United Kingdom.

Moreover, the wedding was officiated by Rev. Louis Beasley-Suffolk performing a Roman Catholic service. People magazine also reports that Balfe’s reel love interest Sam also attended the nuptials. The actor wore a gray suit, blue and black tie, taking an umbrella on the right hand and a drink on the left hand for the pose.

Heughan posted a photo on Instagram straight from the nuptials with the caption, “Remarkable weekend. ☂️💞🍾🎊 Wonderful tailoring @alfreddunhill.”

Shortly after the ceremony, Balfe headed out for shooting the fifth season of Outlander. We can say, the honeymoon is still on hold for the duo.

No doubt the husband and wife are looking pretty happy together and we wish them years of happiness as a married couple.

Does Caitriona Balfe Have Any Children With Tony?

No, the happy couple does not share children as of yet. Moreover, there are no reports on whether Balfe is trying for a baby. Similarly, Tony also has not welcomed any kids from any previous relationships as well.

Safe to say, the couple will take their time before getting into the realm of parenting. We are sure they will become excellent parents.

Caitriona and Tony got engaged in Early 2018

The two dated for a couple of years before Balfe confirmed her engagement with her then-boyfriend Tony McGill to People while appearing at the 75th Golden Globe Awards on 7th Jan 2018. She maintained they got engaged over the holidays. The actress said, “It happened over the break. I’m very happy.”

Balfe also showcased her sparkly engagement ring along with the commemoration of her Golden Globe nomination.

The precise date when exactly Caitriona and Tony met for the first time isn’t known, however, as per a mutual friend Donal Brophy‘s Instagram post, the two looks like they are together since the mid of 2010s. On 2nd Jan 2015, the actor Donal posted a snap of Balfe’s flute-playing video, in which the actress is seen setting alongside her boyfriend McGill at a bar in Ireland.

Here is the snap,

Balfe Attended Jodie Foster’s Walk of Fame with Her hubby

Caitriona and McGill joined the distinguished director Jodie Foster on the occasion of Jodie’s Hollywood Walk of Fame induction in May 2016.

The photo Balfe posted on her Twitter doesn’t show Tony clearly, but the actress did appear with him.

In Feb 2017, the actress won the Oscar Wilde Awards. At the time, Tony accompanied his then-girlfriend now-wife to celebrate the huge moment of her career.

In addition, Caitriona also joined many other famed artists at the function like Zachary Quinto, Ruth Negga, and Martin Short. It was hosted by the American filmmaker J.J. Abrams.

This is another rare glimpse of Caitriona with her low-key music producer spouse Tony. The couple was seen together at the BAFTA Los Angeles Tea Party in Jan 2019.

Other attendees who join the party include fellow actors Emma Stone, Gemma Chan, and more others.

They Also Appeared Together With Sam Heughan At Musical Festival

On 12th July 2019, Caitriona along with her spouse also joined her Outlander co-star Sam (Balfe’s on-screen partner) at the Henley Festival in Oxfordshire, England.

Before Balfe’s engagement to Tony, the terrific romance Heughan shares with Balfe on-screen made many wonders whether they are also special beyond the camera. But, they are just close friends off-screen.

In an interview with Parade in October 2018, Balfe addressed the rumors,

There’s a small vocal group that really wanted it, which is just a testament to the characters that we portray, that the love story is so inspiring and so aspirational that people just really wanted to believe in it. And that’s a nice thing. But I think things are pretty clear now that I’m engaged to someone else. Everyone gets it now.

While Balfe is leading a happy married life with her hubby, Heughan still remains single at present. But, it doesn’t mean that the actor didn’t have any romantic affairs in the past. Sam previously dated actress MacKenzie Mauzy. He was also rumored to be dating Cody Kennedy and a budding actress Amy Shiels.

Who Is Outlander star Caitriona Balfe? Grew up with several siblings