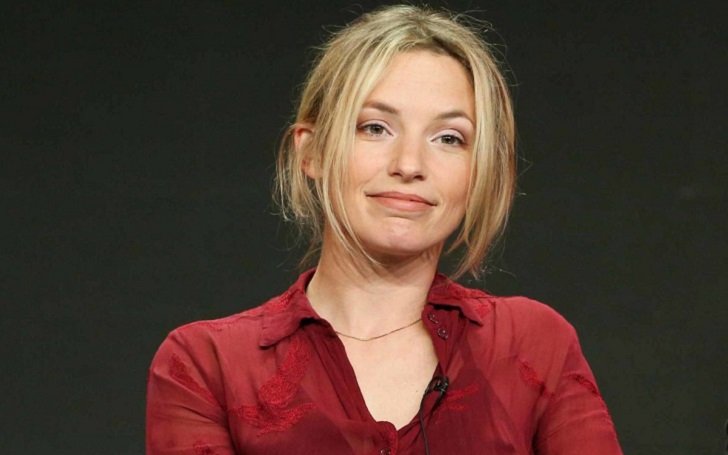 Perdita Weeks is a popular actress famous for her breakthrough performance on the CBS reboot series Magnum P.I. She plays Juliet Higgins, a retired MI6 agent in the project since 2018. Weeks is also credited for her work on TV series like The Promise, Hawaii Five-0, and more.

We are also going to explore several other hidden facts about Perdita you could know!

Are Perdita Weeks and Kit Frederiksen Married? Or It is Just a Rumor

No, Perdita Weeks and her rumored-husband Kit Frederiksen are not married. Even so, almost every tabloid wrote that the two are married since October 2012. Sources even say Perdita is also the mother of twin sons Humphrey Carrington Frederiksen and Rupert Sebastian Frederiksen with hubby Frederiksen.

In fact, all the rumors we have mentioned above are totally fake. In April 2019, the actress herself wrote on Twitter refuting all the speculations,

When you have to spend your Monday morning reporting the myriad false mentions on the internet of your “husband” and “children”. You’d think I would remember getting married and birthing twin boys…” Weeks ended the debacle with the hashtag, “#oldfakenews.”

Who is Perdita Weeks’ fake Husband?

Talking about Frederiksen, the man from this name still remains a mystery as there is nothing about the guy. Besides, tabloids have mistakenly added a picture of her co-star Ben Feldman depicting him as Kit.

Ben and Weeks appeared together in the thriller movie As Above, So Below in 2014. In the movie, Weeks played Scarlett Marlowe, a gifted scholar while Ben’s character George was Scarlett’s ex-boyfriend in the movie.

Perdita and Ben are close professional pals. Her television-boyfriend Ben has been leading a pretty successful married life with his wife Michelle Mulitz since 2013.  They are also proud parents of a son named Charlie Milton Feldman.

Perdita Weeks, 34, has totally kept things private. Despite her years-long journey in the TV and film industry, the actress never came out with any of her boyfriends, all thanks to her ability to keep things to herself.

Therefore, it is quite difficult to maintain whether Weeks is dating someone else or relishes a single relationship status.

Perdita Weeks has racked a good amount of money through her work in movies and TV shows. As per some reliable online sources, Perdita’s net worth is $1 million as of 2020.

Weeks played on several commercially hit projects, including As Above, So Below which grossed over $40 million at the box office on a budget of $5 million. There is also no doubt the entertainer received a hefty payment from the film.

Perdita owns a house in London.

Who are Perdita Weeks’ Parents? Mom & Dad divorced at age 11

Perdita Weeks was born in Cardiff, Glamorgan, Wales, on 25th December 1985. Her parents Susan Weeks and Robin Weeks married in 1979 and went on their separate ways after 18-year of marriage in 1997.

Her mother is a freelance copywriter and attended Cheltenham Ladies College. She later went on to study at Universite de Lille and University of St. Andrews. Her father runs an advertising company.

Weeks holds an English nationality and belongs to White ethnicity. She is of Scottish and Irish ancestry.

Perdita first studied at Roedean School in East Sussex. Upon her schooling, the then promising actress enrolled at the Courtauld Institute in London and studied art history.

Yes, they are sisters and also share the same love for the show business. Weeks landed her first acting gig along with her older sis Honeysuckle at age seven in the TV mini-series Goggle-Eyes in 1993. The British actress played Judith Killan on the show.

Apart from Perdita, her sister also has an impressive career in acting. She grabbed attention with her performance on the ITV drama series Foyle’s War.

Similarly, their younger brother Rollo Weeks is a former actor. He appeared in movies such as The Little Vampire and The Thief Lord. Rollo is a photographer too. He later made his transition in the business world.

Perdita reunited with her sister Honeysuckle once again playing older and younger versions of the main role, Millie, in an adaptation of the Catherine Cookson novel, Rag Nymph, in 1997.

Perdita’s Other Movies and TV Roles

The same year, Perdita Weeks snagged the role of Evie in the musical comedy Spice World. Her other successful projects are The Prince and the Pauper, Stig of the Dump, Midsomer Murders, and Sherlock Holmes and the Case of the Silk Stocking.

Weeks’ recurring role Mary Boleyn on The Tudors brought her early fame. Furthermore, the actress appeared in several TV mini-series that include The Promise, Great Expectations, Titanic, and Flight of the Storks.

Perdita bagged her first role in the feature film The Invisible Woman in 2013. She portrayed Maria Ternan along with Ralph Fiennes, Felicity Jones, and Kristin Scott Thomas.

In 2014, Weeks went on to become a part of another movie As Above, So Below. Her most commercially successful silver-screen project was Ready Player One (2018). It collected a box office collection of $582.9 million worldwide. She appeared as Kira in the project sharing the credit alongside Tye Sheridan and Olivia Cooke.

In 2018, Perdita Weeks took the role of Juliet Higgins in drama TV series Magnum P.I. along with Jay Hernandez, Zachary Knighton, Stephen Hill, and more. She is still a cast member of the project.

Moreover, Weeks reprised the role, Juliet Higgins, on CBS series Hawaii Five-0 in 2020. Aside from acting, she is a voice actor as well. She gave her voice on the video game, Du Lac & Fey: Dance of Death.