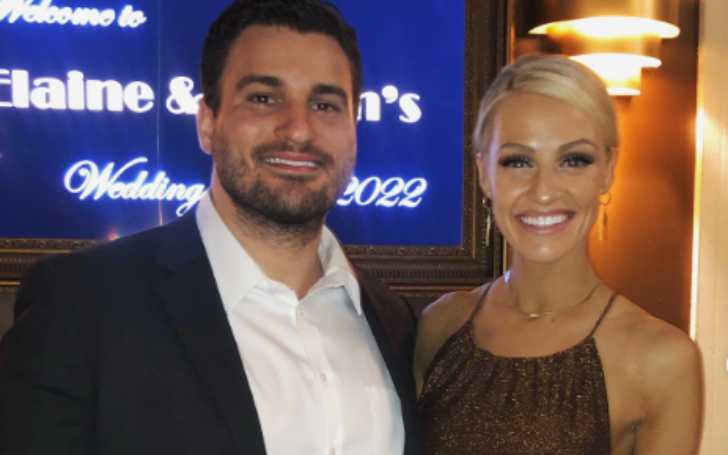 Peter Buchignani is an American businessman who came to the limelight as the husband of a FOX News reporter, Carley Shimkus. His wife currently serves as a co-host of the show called Friends First.

Though Carley is a known name in the media world, not much information is available about her husband Peter. Buchignani and Shimkus are together for more than half a decade now and are still going strong. So, let’s also find out how did the couple meet? Do they have any children?

In this article below, we will discuss everything about the “Fox and Friends First” co-host’s life partner Peter Buchignani. Also learn about his nationality, interest in football, job, and more!

What Is The Age Of Peter Buchignani? His Nationality And Ethnicity

Peter Buchignani was born on September 21, 1986, making him 36 years old as of 2022. He is an American native who was born and brought up in Bloomington, Illinois, United States of America.

Belonging to a Caucasian ethnic background, Buchignani holds American citizenship. Well, though the celebrity spouse spent most of his childhood in his hometown, Buchignani now resides a few miles away in Chicago.

Buchignani’s Family; His Parents And Siblings

The businessman was born to his parents Mary Edna Buchignani (mother) and Leo Buchignani (father). His dad was reportedly a lawyer while his mother was a homemaker.

Also, according to reports, Peter is not the only child of his parents. He has a younger sister named Lainey Buchignani and an older brother named Leo Buchignani Jr. All the brothers and sisters have shared a beautiful relationship with each other.

College: He Graduated From Princeton University

Moving into his academic qualifications, Peter has a bachelor’s degree in political science. He joined Princeton University in 2005 and graduated from there in 2009. Prior to that, he did his schooling in a local school in his hometown.

Peter Was In The Football Team In His College

During his college days, Peter actively participated in most sports. According to Princeton’s website, he was a defensive end on the football team for three years. In fact, he also played basketball in his high school.

Following his interest and passion for sports, he also earned All-Ivy honorable Mention Honors two times. Not only this, but he also recorded 34 tackles in 2007.

Who Is Peter Buchignani’s Wife? When Did They Marry?

The relationship between Peter and his spouse has been quite open in the public. The businessman has been married to his girlfriend-turned-wifey Carley Shimkus for several years.

As mentioned earlier, his spouse Buchignani is a famous media personality who is popular for her work on the FOX News Channel. She is currently an anchor and a reporter as well as a co-host on “Fox and Friends First.”

Talking about their love life, according to numerous tabloids, the doting couple came across in 2009 on Carley’s birthday. Even though the sweethearts then crossed their paths, they started dating only in 2013. And after dating for a couple of years, the duo eventually decided to tie knots on 8 August 2015. As for their wedding, it was held at Fiddlers Elbow Country Club in Bedminster, New Jersey.

The couple is now married for almost about seven years and is still going strong although they live in different cities due to their profession. Yet, the sweethearts somehow manage to spend quality time together going on vacation to exotic places away from their work.

Does Carley Shimkus Have a Baby With Peter?

No, the husband and wife have no children yet. Even though the couple was rumored to have a kid named Zoe because of the photo Carley uploaded on her Instagram, it was all baseless talk.

While digging in to search for the truth, we came to find it was one of her friend’s daughters. She was there only to celebrate the baby’s first birthday. Therefore, as of now, Peter and Carley don’t share any baby yet but we hope they welcome their bundle of joy soon.

What Does Peter Buchignani Do?

As per his LinkedIn profile, Peter currently works in the business development department in Securitized Products Sales at Amherst Pierpont Securities. In fact, Mr. Buchignani started working and earning for himself right after his graduation in 2009. He landed his first job as a sales analyst at Barclays Capital in Securitized Products. He was there from July 2009 to August 2011.

Peter then joined Deutsche Bank as MBS Sales in Jan 2012 and worked there for about three years until Jan 2015. He finally went on to work in his current working company and has been there for 7 and a half years now.

Though Peter hasn’t opened up about his earnings and assets, the businessman’s net worth is estimated to be near $1 million. Meanwhile, his wife Carley has also amassed a total fortune of $1 million. She has made her worth through her media profession.

The couple currently resides in the Greater Chicago Area.

What Is the Height of Peter?

He stands 5 feet and 9 inches tall.