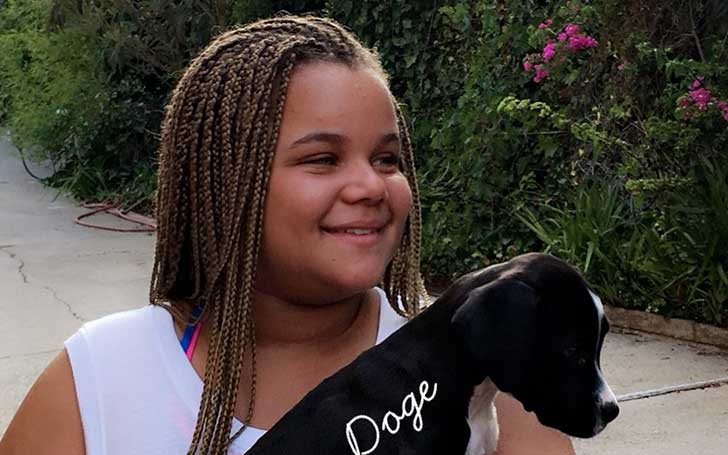 Piper Gooding is the daughter of famous American actor Cuba Gooding Jr. Cuba is known for his acting roles in Boyz n the Hood, A Few Good Men, The Tuskegee Airmen, and Jerry Maguire.

Even though Cuba Gooding was already a superstar when his daughter Piper was born, there still is a lot of confusion about Piper’s real photo. Despite his immense fame, Cuba kept his children’s life away from the media radar. It is one of the reasons for some fake details and images of Piper being circulated on the internet.

Piper Gooding is the Only Daughter of Cuba Gooding Jr.

Piper Gooding was born as the youngest child of Cuba Gooding Jr. and his former wife, Sara Kapfer. She is the only daughter born to the former lovebirds. Piper was born on October 22, 2005, in the United States of America. She is also the niece of April, Omar, and Tommy Gooding.

Talking about her education, Piper is currently in high school. She studies at Palisades Charter High School.

She has Two Older Siblings

Piper Gooding has two older siblings, brothers Spencer Gooding and Mason Gooding. Her oldest brother, Spencer was born in 1994 while Mason was born on November 14, 1996. Piper is nearly nine years younger than her older bro Mason.

Spencer graduated from Wesleyan University in 2018 while Mason is still attending college. As of now, Mason plays college basketball for the Grizzlies. Piper shares a special bond with both of her brothers which we can see on their social media posts. Piper has an Instagram handler @piperadelaide_ which she has set private. Besides, she has a Snapchat account under the name @piper_gooding.

Mason Gooding has also pursued a career in acting like his father. He made his debut appearance as himself in 2002 in an episode of the TV series, Slamball. In 2016, Mason officially started his journey in acting when he played the character of Johnny in a short, Godspeed.

Mason’s other notable roles came in the television series, Ballers, The Good Doctor, and Everything’s Gonna Be Okay among others. His most recent acting role was as Andrew in the TV series, Love, Victor.

Piper’s oldest brother, Spencer also made his first television appearance in the 2002 TV series, Slamball. But Spencer hasn’t shown his interest in acting ever since.

Piper’s parents, Cuba Gooding Jr. and Sara Kapfer first met at their high school. They started seeing each other in the late eighties and after seven years of courtship, Cuba and Sara exchanged vows on March 13, 1994.

The couple lived a happily married life for over two decades before they decided to cut the tie. Cuba and Sara legally separated in 2014 and three years later in 2017, Cuba filed for divorce. In the court documents, the Oscar-winner asked for joint legal and physical custody of their daughter, Piper.

Meanwhile, Cuba once talked about his estranged relationship with his former wife, Sara during a conversation with Steve Harvey. There he said:

The ex-husband-and-wife are yet to finalize their divorce. As per The Blast, the process has now reached the final stage. The outlet reported back in January 2019 that Sara had submitted her income and expenditure reports to the lawyers. It means the divorce is imminent.

She Had Her First Photoshoot at Just Seven Months

It is natural for celebrity kids to come to the limelight young. Likewise, Piper had her first photoshoot even before she learned to speak. Her father Cuba Gooding Jr. showed off his newborn daughter during a photoshoot for the May 2006 issue of InStyle magazine.

Back then, Cuba also featured his two other children and his then-wife, Sara in the photoshoot.

Piper’s father Cuba Gooding won his first and only Academy Award in 1996 for his role in the blockbuster dramatic sports comedy, Jerry Maguire. He worked alongside Tom Cruise in the movie which was one of the most successful movies of Cuba’s career.

Piper Gooding’s dad, Cuba Gooding became of the celebrities to be accused of sexual assault and rape in the latest wake of the #metoo movement. In June 2019, Cuba was charged with misdemeanor forcible touching and sexual abuse in NYC. The charges stemmed from an incident the previous weekend when he allegedly groped a woman at a bar in Times Square.

In October 2019, Gooding Jr. was booked on a separate charge of sexual abuse. Meanwhile, as of November 2020, 30 women have accused the actor of unwanted sexual touching. However, the 52-year-old star pleaded not guilty. Moreover, Gooding’s representative claimed the accusations “completely false and defamatory.”

Piper Gooding Is Not On Social Media

Unlike most celebrity kids, Piper is not on social media platforms like Instagram and Facebook. Apparently, she does not seem to enjoy her socials as much. However, her father is pretty active on Instagram with over 257k followers.

As of now, Piper is focused on her studies and does not make money of her own. However, her dad is extremely rich with a net worth of 14 million in 2022.