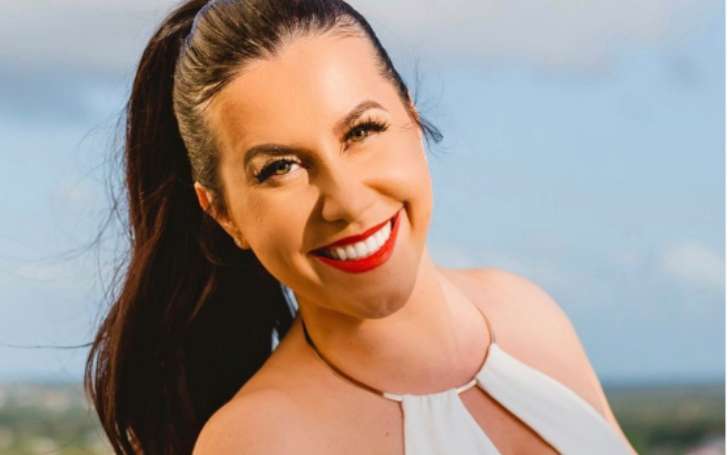 Radina Aneva is a Bulgarian native who came to notice after her marriage to the former American basketball player Jeffrey Jordan. Her husband is an entrepreneur and the co-founder of a philanthropic foundation, Heir Jordan. Besides being a celebrity spouse, Radina works as a financial analyst at the Walt Disney company.

Radina and Jeffrey are together for a long time now. The couple exchanged their vows in 2019 after dating for some years. The newly wedded husband and wife are having a great time with each other. So, let’s find out what are they up to next? Is everything going well between the two?

Read the article below to find out the details about Jeffrey Michael Jordan’s wife, Radina Aneva Jordan including her education, family, Instagram, and many more.

What is The Age of Radina Aneva? Her Nationality and Ethnicity

Born in the year 1985, Radina is 37 years old now. She was born on 9 September in a  well-off Bulgarian family. Furthermore, the celebrity’s wife belongs to the Caucasian ethnicity and holds Bulgarian citizenship.

Born in a decent family, Radina had a beautiful childhood in Bulgaria. She was brought up in her hometown alongside her sister.

Her Appearance And Height

Talking about her features, Aneva has an attractive personality with black hair and a brown set of eyes. Moreover, the analyst stands 5 feet 9 inches tall.

Even though Radina Aneva is popular in the media, she hasn’t opened up about her family details yet. On the contrary, she frequently uploads pictures of her mother, father, and sister on her social media handles.

Looking at her Instagram posts, we have discovered she has a sister similar to her. Also, they don’t seem to have much age gap and are immensely close to each other.

On the other hand, Radina celebrated her parent’s 42nd marriage anniversary on 31 October 2019. At the time, she also made a post on her Insta uploading her picture alongside her mom, dad, and her husband.

Where Did Radina Went To Her College?

The celebrity spouse Radina is a well-educated personality with a master’s degree in Management of IT projects. She joined the New Bulgarian University in 2009 and graduated in 2011.

Prior to that, Radina Aneva enrolled at Sofia University St. Kliment Ohridski for her Bachelor’s degree. She studied Mathematics & Computer Science there, for four years from 2004 to 2008.

Coming to the love life of the celebrity bride Radina, she was dating the son of Michael Jordan, Jeffrey Jordan. During their romantic relationship, the duo went on vacations to different places where Aneva shared pictures on her Insta feed.

Eventually, her boyfriend-turned-husband proposed to her for marriage with a beautiful diamond ring. Following that, the couple exchanged their rings on 22 November 2017 in Hawaii

Mrs. Jordan then shared the picture with a ring on her finger. She captioned the photo writing, “I said YES! ❤️💍💎 #engaged I love you!!” tagging her beau on it.

After their engagement, Radina and her partner Jeffrey soon started planning their nuptials. The pair was very excited about their marriage and also let their fans know they were preparing for their wedding soon. Everyone was speculating that the then-boyfriend and girlfriend were going to have grand matrimony.

In due course. Mr. and Mrs. Jordan walked down the aisle on 25 May 2019. Proving the speculations right, the lovebirds had a lavish wedding function. During the nuptials, the bride wore a gorgeous off-white gown with a long white veil to compliment the dress. Meanwhile, the groom was dressed in a black suit and white shirt with a bow to go with it.

Well, the couple is happily married ever since. They are blessed to have each other as we can see the bride’s feed decorated with beautiful pictures of the couple. Also, the celebrity wife has now adopted her husband’s surname and has become “Ravina A. Jordan.”

What Does Jeffrey Jordan’s Wife Radina Aneva Do?

According to her LinkedIn profile, Radina Jordan is currently working as a financial analyst in The Walt Disney Company since February 2020. She has assisted various companies before encountering this job.

The foremost job Radina entered after her graduation was in MAPASS, Inc as a scheduling coordinator in Bulgaria. After working there for a year, Aneva worked as a financial analyst/credit controller in Belgian-Bulgarian freight shipping and logistics company for six years from 2010 to 2016.

Learning and getting experiences from her previous tasks, she then enrolled at Twentieth Century Fox for four years from 2016 to 2020 as a team leader and also a collections specialist. This was the last job she took before working at Disney.

Being a celeb’s spouse, Radina has quite a good fan following on her social media platforms. She is active on almost all social sites and keeps updating her fans about her life activities.

That being said, she has an Instagram account under the name a_radina with 10.4K followers and 275 posts. Similarly, she is active on Twitter @RadinaJordan with 984 followers. The star wife also has a Facebook account by the name Radina A. Jordan however she doesn’t seem to be more active there.

Radina Aneva is successful in her profession and has made her own identity by herself. Therefore, she must have amassed a good fortune through her work. Having said that, many tabloids suggest Jeffrey Jordan’s wife has a net worth of $1 million in 2022.

On the other hand, her husband Jeffrey Michael Jordan is also a multimillionaire with total assets of $24 million. He has made his worth through his business and basketball career.