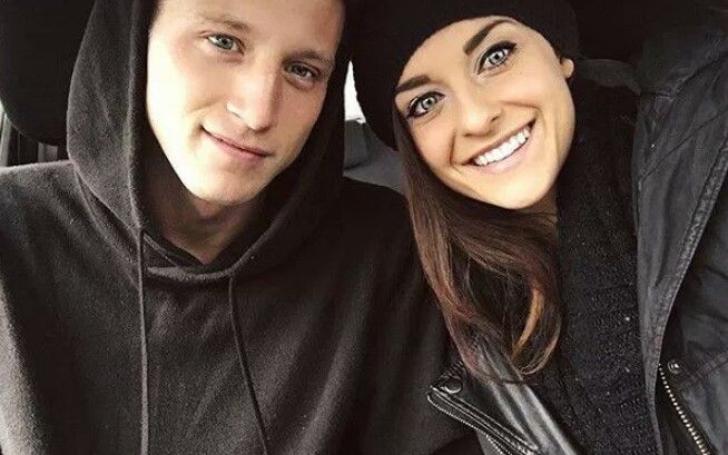 Rapper Nathan Feuerstein aka NF had a troubled childhood but now he is in a better life, married to the person he loves the most. He and his wife, Bridgette Doremus shares a beautiful marital relationship.

Take a close look at their enduring relationship and find out when and how did the future husband and wife meet for the first time.

Growing up, NF had a troubled childhood as he lived with his single mother whose boyfriend was abusive with him and his siblings. But the rapper’s innate ability to overcome hardship helped him to reach where he is today.

2018 was one of the most rewarding and challenging years of my life. We moved into a new home, got engaged, traveled the world and finally got hitched. But with all the rewards came a lot of sacrifices – there was A LOT of stress and even more lessons learned but I wouldn’t change this year for the world. In 2019 I hope to cultivate a life with more self care, creativity, love, and patience. Thank you to everyone who celebrated life with me this year and for those who followed along on this crazy journey – I love you all!

Today, the 29-year-old rapper is happily married to Bridgette and enjoys a good professional life along with marital bliss. Talking about his marriage, NF tied the knot with his girlfriend-turned-spouse on September 1st, 2018.

The lovebirds exchanged their vows in an intimate ceremony surrounded by many of their friends and family. They decided on an all-natural wedding so the wedding was all done on a farm surrounded by lush greenery.

NF and his wife’s second wedding anniversary is coming soon and we wish nothing but happiness to the pair in the future.

NF Proposed to Bridgette in 2018: The Engagement Ring

Before their big wedding in September, the rapper proposed to his long-term girlfriend. They got engaged in January 2018 and fast forward a few months later, their big day came.

His wife took to her social media handle to announce the news of their engagement. What’s more, she even showed off her exquisite engagement ring.

How did NF Meet his future Wife Bridgette?

It was back in May 2015 when NF and Bridgette met for the first time. One of Bridgette’s guy friends, who lived in LA, invited her for a block party. At first, the 30-year-old wasn’t gonna go but later, she decided to go there anyway.

Surprisingly, her friend invited an up-and-coming rapper to perform at the party and the rapper was none other than NF. After his performance ended, he chatted up with Bridgette and asked her about her profession.

After a funny conversation, they ended up exchanging numbers. The couple did long distance for a 1-year before moving in together. At the time of their meeting, Bridgette was freshly out of a long-term relationship with her ex-boyfriend.

Watch the full video where Bridgette is talking about their first meeting!

As if their relationship wasn’t already a goal for many, NF’s partner Bridgette took it up a notch. In May of every year, she expresses her gratitude that she met NF back in 2015. Such a touching tribute.

Although for many, celebrating the day of your first meeting as your anniversary might seem trivial, the fitness guru doesn’t think so. And we’re glad the lovebirds find happiness in small things.

Take a look at how the post she made last year, marking their 4-year anniversary.

Soon their attraction turned into love and they decided to tie the knot. NF proposed his girlfriend in January 2018 and just months after the engagement, they married.

Who is his wife Bridgette Doremus Feuerstein?

The fandom wants to know that aside from the fact NF is totally head over heels for this lady, who is she by the by’s?

Just like her husband, Bridgette also loves her work and is a certified Fitness Guru.

What’s more, she is a big-time health freak and eats Gluten Free, Dairy Free food items only. On top of that, she is a Pescatarian, meaning she doesn’t indulge in meat products but eats Fish.

She also writes blogs and so far wrote several cookbooks for a healthy lifestyle. Likewise, she runs her own clothing line-up called Halfway Hippie.

Besides, Bridgette too had a tragic family life. Her father passed away after committing suicide. She can be followed on her Instagram account @bridge_fit.

Where is Bridgette Doremus Feuerstein from?

As mentioned earlier, before getting married, the couple initially had a long-distance relationship. Bridgette hails from Seattle, whereas, her hubby is from Michigan.

Do NF shares any children with his wife?

Well, as of now, NF and his wife Bridgette are expecting their first child together. She announced the big news in January of 2021 with a photo of the ultrasound alongside a video which captures her true emotions when she first tested for pregnancy.

She is due in late 2021. As of this moment, the gender of the baby is not known.