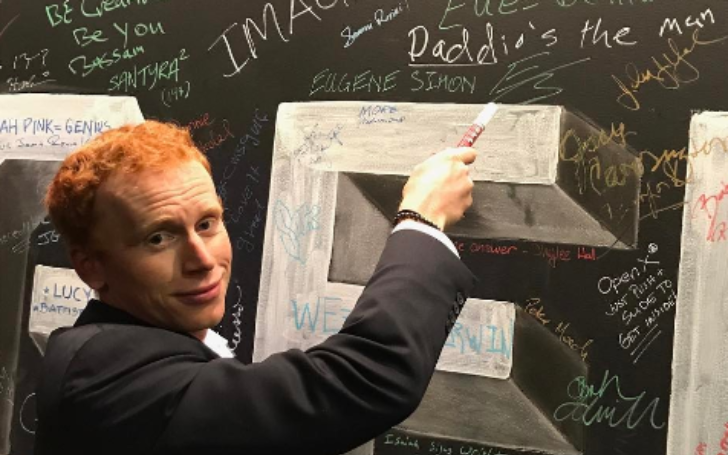 Reed Cross Howard is a professional golfer who has invented a new design of Steadhead Training Aid. He rose to prominence as the son of American director Ron Howard. Similarly, his father Ron first came to the limelight as a child actor while appearing as a guest in a number of TV series like The Twilight Zone. Furthermore, Cross’ dad is the son of the late actress Jean Frances Speegle and actor Rance Howard.

In addition to his career as a golfer and strong family background, Reed has also been in a healthy marital relationship with his wife now. While going through Howard’s social media handles, we could find out his wife doesn’t hesitate to cheer his professional career. Then, who is his love of life? Do they share any kids?

Explore every bit of information about Reed’s personal and professional life here in this article. Let’s dig into it!

Reed Cross Howard Is The Youngest Child Of Ron Howard

Reed Cross Howard was born on April 12, 1987, to Ron Howard (father) and Cheryl Alley (mother). As for his birthplace, many have spread the rumor that it is Banksville, United States. To tell you the truth, he was born in Los Angeles, California.

Furthermore, he spent most of his early days in the East outside of New York City because his father wished to keep him far from the prying eyes of the media.

Reed Cross Howard’s Grandparents Are No Longer In This World

On the other hand, his maternal grandfather Charles Alley, a chemical engineer, also died and was buried at Gueydan Cemetery, Vermilion Parish, Louisiana. But, the information regarding his maternal grandmom is still under the media radar.

Reason Behind Reed Having His Middle Name As ‘Cross’

Each and every of Ron’s children has a different middle name. Then, what is the reason behind giving all four of them an unmatched middle name? To keep it simple, they got their middle names according to the place they were conceived.

The eldest one among them, Bryce ‘Dallas’ Howard, bears a clear remark of Texas USA. The twins’ Paige and Jocelyn’s middle names ‘Carlyle’ is given as per the Carlyle Hotel in New York City, the place they were born. Reed carries his middle name ‘Cross’ similar to one of the most famous London streets.

But, at first, Ron decided to put ‘Volvo’ for Reed’s middle name but on second thought he said, “Volvo isn’t a very good middle name” and ended up giving Cross.

His eldest sister is Bryce Dallas Howard (b.March 2, 1981). Four years later, his elder twin sisters Jocelyn and Paige Howard were born on February 5, 1985. Take a quick look at the image down here of Howard’s siblings when they were still kids.

Besides, his sisters have followed in their father’s footsteps and all three of his siblings are pretty popular as an actress. Similarly, they are settled in their respective professional life.

Cross Howard went to Heritage Academy for his primary studies. Later, he enrolled at the University of South Carolina Beaufort – Bluffton campus where he was also a member of the golf team from 2007 to 2008. Similarly, he was also qualified for the U.S. Amateur Championship at the famed Pinehurst Course in North Carolina.

Howard then went to Pepperdine University.

What does Reed Cross Howard do? He Is A Professional Golfer

As mentioned above, Reed was interested in golf since his high school days. Thus, he doesn’t seem to be pursuing in his father’s footsteps but has his own goal. Although Cross hasn’t been professionally engaged in his golf career yet, he has participated in a number of golf tournaments like the USC Aiken Invitational, Webber International Tournament, and Wilmington Island Invitational.

Similarly, the golfer also has a YouTube account under the name Reed Howard Golf, where he has described himself as “a professional golfer who love to train teach and compete.”

He further said that his “channel is filled with instruction competitive live stream and anything else fun I can think of. This channel is truly a fun outlet for me to express my views, train, and communicate with everybody.”

Besides, Howard seems to be working as a teacher for the rookie players. Similarly, he charges $30 for a swing breakdown with suggestions and drills, exercises, etc, and $50 for a live 30-minute lesson over zoom (needs a computer).

As mentioned earlier, Ron Howard’s son Reed Howard is recognized as the creator of a powerful new tool known as Steadhead Training Aid which is used by several golfers nationwide. It is a product of personal necessity. According to Reed,

“Golf’s best players were very good at rotating around a very stable center. It’s like trying to shoot an arrow at a target from the top of a horse vs. a stable position. If your head’s moving around all over the place, your hand-eye coordination is going to suffer.”

Cross’ new training aid is based on a sleek design that is easy to use and helps to improve your swing and to learn how to hit every shot more solid and on target.

Thanks to his product, many users have called it the best training device and has really helped them to learn more about golf.

Reed Cross Howard Is A Married Guy: Who Is His Wife?

Ron Howard’s son Reed Cross Howard has been in a marital relationship with a woman named Ashley Howard. Moving into their marriage, Reed and his wife Ashley walked down the aisle in August 2015, at the Winvian Farm in Litchfield Hills, Los Angeles, CA.

The news about their wedding was announced by his father. On August 12, 2015, his dad Ron came up with a post on his Facebook. He captioned,

This past weekend we celebrated the wedding of our son Reed to his beautiful bride, Ashley. It was a whirlwind of a celebration at the Winvian Farm and I wanted to share some photos.

However, Reed has kept his initial love life far from the media light, so, there isn’t any specific info about how the golfer met his future wife. Whatever the case may be, the couple is now leading a blissful married life together. Moreover, Reed often posts images and short clips spending quality time with his wife.

Reed And His Wife Have A Daughter

The star kid Reed and his wife Ashley welcomed their first daughter Aspen Leigh Howard on April 26, 2019. Like Reed’s wedding, his father Ron was the first to announce his granddaughter’s birth. In fact, the director and producer took to Twitter to announce the huge news and captioned the post,

#ReedHoward and wife Ashley were blessed with their first child yesterday. Here is Reed with daughter Aspen a few hours after her arrival. Ashley is doing great as is Aspen.

Similarly, on April 26, 2020, on the occasion of Aspen’s 1st birthday, the proud father Reed uploaded a bundle of photographs on his Instagram. The caption reads,

“Happy 1st Birthday, Aspen! Being your dad this past year has brought your mom and I so much joy, laughter, and excitement. We love you and feel so grateful to be your parents. Looking forward to seeing what your 2nd year looks like”

Needless to mention, all four of Ron Howard’s children have made him feel proud through their successful careers. Well, here we have come up with what really Reed’s father feels about being a father to him and his three sisters.

In an interview with The Wrap, while talking about his eldest daughter, Ron said,

“I’m going to jump in here as a dad. Underneath it all, she’s a really excellent writer. Always was. She could write her way out of a problem. She didn’t have to study all year – she could just write the paper at the end. I was chagrined, but at the same time, she’s a natural storyteller.”

Furthermore, on how Ron stepped up as a dad, he told,

“When Cheryl became pregnant with twins, I really had to step up. And I honestly remember doing more cooking, more caretaking – really looking after Cheryl. I remember thinking to myself wow, I’ve really been a kid up until now. For the first time, I really feel like a man. I really feel like I’m doing a man’s work for my family.”

Interestingly, Reed who is now 35 years old has quite a matching face with his dad but it was when the director Ron was in his 30s. Especially, the character Richie Cunningham Ron played in Happy Days was quite a look-alike to his son.

Well, after seeing the above-mentioned picture, you might have noticed there isn’t much difference between Ron’s and his son Reed’s facial looks.

As we all know, Reed’s whole family is into acting. His father Ron Howard used to be the narrator in the series Arrested Development, but since Season 4, the director also started appearing in the show. And in the 5th Season of the show, Ron brought his family to appear in the series.

Furthermore, it was the first ever series in which Reed appeared.

In November 2020, Reed’s parents celebrated the 50th anniversary of their first date. Similarly, on June 7, 2021, Ron and his wife Cheryl threw a party on the occasion of their 46th marriage anniversary.

Initially, the enduring lovebirds were high-school friends. It was love at first sight for Ron, he instantly felt a connection with his wife Cheryl when they were juniors at John Burroughs High School. Besides, in November 1970, the couple went on their first date.

Later on, they went on to watch a re-release of Stanley Kramer’s It’s a Mad Mad Mad World and then had a sweet pizza date at now-defunct Barnone’s in Toluca Lake. After dating for five years, Reed’s parents got hitched on June 7, 1975.

The actor has also talked about the reason for his successful marital relationship. In June 2019, he told People,

“People say, ‘How’d you do it?’ There’s no tactic other than communication is really important. You have to learn to communicate and have difficult conversations in constructive ways.

How Rich Is Reed Cross Howard?

As a son of a well-known actor, people have made up their minds that he wouldn’t worry about earning money. But, it is totally wrong and as the matter of fact, Reed has been making a good amount of fortune from his golf career.