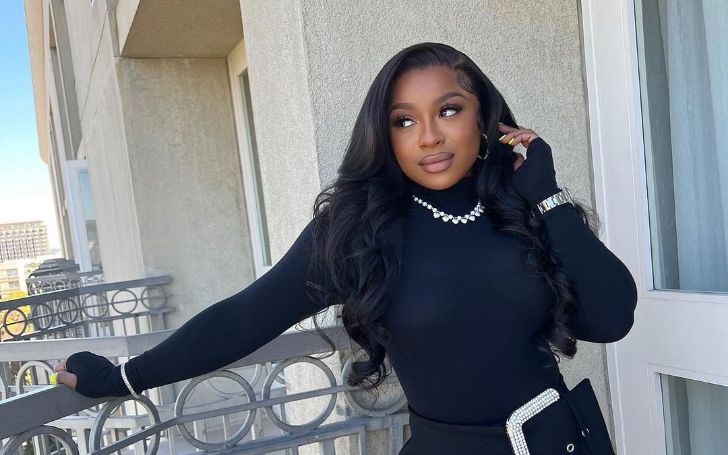 Reginae Carter is a rapper by profession. On the other hand, she is also recognized as the eldest daughter of music artist Lil Wayne. Apart from music, the celebrity daughter is also seen in the film industry. Reginae has appeared in TV shows like Boxed In, Terror Lake Drive, I Got a Story to Tell, and so forth.

Besides her multiple careers, she was once romantically linked with the American rapper YFN Lucci. After saying ‘once’ it means, they are not together as of 2023. We will talk about the unsuccessful love life of Reginae.

This article is all about Reginae Carter’s life including her age, mom, net worth, birthday, boyfriend, and many more.

How Old Is Reginae Carter? Details On Her Family Roots

Reginae Carter is 24 years old as of 2023. She was born on November 19, 1998, in Louisiana, the United States. As we all know, her father is the popular rapper Lil Wayne, but who is her mom?

Rumors of her death

Besides, when she turned 10, there were lots of rumors about her death in a car accident. Nonetheless, it was all a false report and her dad Lil Wayne disclosed to the media, that his daughter is alive, healthy, and surrounded by family who cares for and loves her dearly.

Reginae Carter Has Many Half-Siblings

Reginae is blessed with four half-siblings. As mentioned earlier, Carter is the eldest among them, so after her birth, her younger half-brother Dwayne Carter III was born on October 22, 2008, from her father Wayne’s relationship with his ex-girlfriend Sarah Vivan.

On September 9, 2009, her younger half-brother Kameron Carter was born to actress Lauren London and her dad Lil. Then, her third half-bro Neal came into this world on November 30, 2009. He is the son between Lil Wayne and his ex-girlfriend Nivea.

Apart from her father’s side, Reginae has one half-sister Reign Ryan Rushing. Her sister was born in 2018 to their mother Toya Johnson and her current husband Robert Rushing.

What Profession Did Reginae Carter Choose?

As we already know, Reginae is multiple talented individuals. Carter has most certainly inherited her father’s genes. In 2009, she joined the girl group OMG Girlz. The following year, in 2010, they released their first single titled Ain’t Nobody.

In 2013, she signed with her father’s record label named Young Money Records. Moreover, in 2014, Carter dropped her debut solo single named Mind Goin Crazy. Besides, Reginae is also doing great on her YouTube channel under her original name.

On her YouTube, she mainly shares personal vlogs with her fans, and often her music video. Apart from being a rapper, like her mom Toya, she is into the business industry. She formed her own clothing brand in 2013, and in 2015, she re-launched the brand under the name, Shut Up.

Reginae Carter Is Also An Actress

Lil’s first daughter Reginae is also interested in acting, aside from her work as a rapper. She made her acting debut by appearing in her father’s documentary The Carter. Then she starred in the TV series named, Wendy: The Wendy Williams Show.

Similarly, Reginae has worked in 14 episodes of the TV series, Growing Up HipHop: Atlanta, so far. Apart from this, her acting credits include Pride & Prejudice: Atlanta, Dear Santa, I Need a Date, Social Society, Renny (A Juneteenth Story), Terror Lake Drive, and many more.

Is Reginae Carter Dating Anyone?

Reginae Carter is dating the YouTuber Armon Warren. At first, they were just friends, however, sometimes later, they had mutual feelings for each other, and started dating soon enough.

As per Reginae, Armon is a gentleman, is very attentive, and talks in a very mature way. Similarly, as a celebrity daughter, people frequently ask if she has introduced her man to her parents, especially to her dad.

Well, Carter says, she has already brought Armon in front of her mom, but not to her father. The 24-year-old actress hasn’t talked much about her now boyfriend with her dad Lil Wayne. She Says,

“I’m really slow with my dad like I bring people around my dad a little later on because it’s just that you know but my mom me my mom like that’s my best friend so I was like okay now we like this so but yeah I’m so with my dad it’s very gradually right but I’ve told him about him I said I’ve talked to him,”

In addition to this, in an interview with THE SHADE ROOM, Reginae was asked what was her purpose when she is dating. Carter answered that she is a loving girl, so she dates to marry.

Prior to her current relationship, Lil’s daughter was also romantically linked with footballers Jaquez Sloan and Joshua Brown, and the American rapper YFN Lucci. From those relationships, she was in the media headlines for her relationship with the music artist YFN Lucci. However, she had to dump him because of his criminal activities.

When Reginae was 8 years old, her parents decided to legally part ways. Her parents were high school lovebirds. Similarly, Carter’s mom Toya was just 15 and her father Lil was 16 when they started dating. In fact, it was around the same age that Reginae was born.

Thankfully, at that time, her dad had already started earning. At just 16 years old, Lil was signed to Cash Money Records as a rising rapper. Likewise, he made the decision to pursue only his rap career so that he could support his new-born daughter financially.

Some years later, her dad became a successful rapper, and her parents decided to walk down the aisle on February 14, 2004. However, nearly after two years of marriage, her parents were no longer together.

Carter’s mom said that Lil was too busy pursuing his professional life, and was an absent husband and a father. After parting ways, her mom Toya stayed in a marital relationship with Memphitz Wright from 2011-16. As of 2023, she is married to Robert Rushing.

On the other hand, her father never married since his divorce from his first wife Toya. Lil only stayed in a short-term relationship with many women. Similarly, her father previously dated radio broadcaster Sarah Vivan, singer Nivea, rapper Trina, and actress/singer Christine Marie Flores.

However, at the time of Lil and Christine’s relationship, they received a lot of criticism from their interconnected exes i.e singer Nivea and songwriter The-Dream.

Reginae Carter Is Active On Every Available Social Media Handles

As said before, Carter is also active on the YouTube platform and has more than 400k followers.

Unlike many other celebrity kids, Reginae has built her own name regardless of her father’s name. As a matter of fact, she has multiple professions as an artist, an actress, an entrepreneur, and many more. It is safe to say, Carter earned millions of dollars.

Likewise, it is believed that she has a net worth in six figures. However, till now the exact amount of her bank balance has become a big mystery.