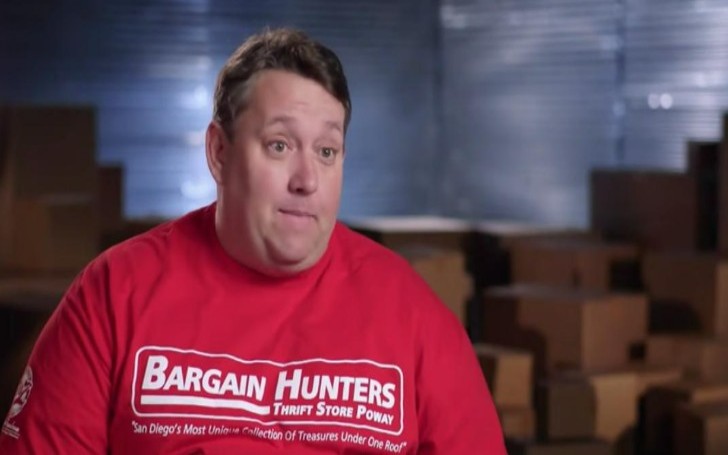 Rene Nezhoda is a German-American entrepreneur who rose to prominence as a star cast in the fourth season of the popular A&E television series Storage Wars. He has been actively appearing in Storage Wars from the year 2013.

Talking about his family, Rene was born into a German family and later moved to the USA. In the US, Nezhoda lived all his life, got married to a San Diego girl, and now is a father of a 16-year-old daughter with his wife.

When Was Rene Nezhoda Born? His Age And Early Life

Rene was born into a German family on April 5, 1977, in Austria under the birth sign Aries. As of 2022, Nezhoda is 45 years of age. Up to 1990, the TV personality grew up in Frankfurt, Germany, with a thick German accent. In 1990, his family moved to the United States of America and settled there in San Diego city. He thus spent his teenage years in San Diego, USA.

As for education, Rene completed his primary-level study in Germany. After his move to the USA with his family, Nezhoda continued his school at Las Vegas High school.

Besides, Rene belongs to the Caucasian ethnicity and probably holds dual German and American citizenship as per his birth.

Who Is Rene Nezhoda Dad?

Rene’s dad, Gunter Nezhoda was an actor who was born in January 1956 in Vienna, Austria. He is not much popular as an actor but has done about 5 movies throughout his acting career. In 2009, Rene’s father, for the first time, acted in a movie named I Am Here… Now.

Following his debut, Nezhoda did four other movies titled Ice Princess and Astro Zombies: M4- Invaders from Cyberspace in 2012, Do Not Disturb (2014), and The Haunting at Death Valley Junction in 2020.

Further, Rene also appeared in a popular American reality TV show Storage Wars. In addition to his acting career, Rezhoda is also a photographer and his work has been featured in Microsoft, Big-O Tires, Ford, and many others.

Career: Rene Nezhoda Started An Antique Business At The Age Of 11

At a very young age, Rene develops an interest in the Antique business and started buying and selling Antiques. Reports say Rene Nezhoda has a great mind for second-hand prices. Due to this, he deals with second-hand items and has been in a thrift store business since 11.

With his great knowledge, he has his own thrift store spread in 7000 sq ft in San Diego, California with the title Bargain Hunters Thrift Store. He keeps a stock of collectibles and antiques in his store and sold them at the best price. Apart from this, Nezhoda even does his business online so that buyers from all over the world could buy the products from his store.

It seems like Rene’s store Bargain Hunters thrift was closed during COVID time. Due to the worldwide epidemics, Rene Nezhoda thought of closing the store. He planned to close it on April 1 and had stated,

I would probably have to move to the business park, and (for retail) that would be suicide.

When he was asked whether he would open his store later, Nezhoda had said if he got a good location he would re-open it after the epidemic passes. Going through his social media account, it seems like his store is open now in 2022 and probably continuing their business through online mode.

Nezhoda Gained Stardom As A Participant In Storage Wars

As we mentioned above, his father was already part of the popular A & E television series Storage Wars. So, Rene Nezhoda was also approached by the show since its first season. But due to his busy schedule, he could not take part in the show but later in the 4th season, he appeared as a contestant.

While in the show, with his jolly nature and entertainment skill, he accumulated massive love from the audience and eventually became a star. Rene has consistently appeared in the show Storage Wars from the year 2013 to 2021. In the 8th season of the show, the TV personality showed up in more than 80 episodes.

Rene Is Hugely Active in Poker Games Too

Aside from his business and television show, Nezhoda is also involved in poker. He said he started playing poker when he was 21. When asked about how he got interested in poker, he said,

I used to play in the good old days at the Horseshoe in Las Vegas. That’s where I started, at Binion’s. I just [spotted] tourists giving the money away. Like every 21-year-old, I was interested in gambling a little bit, because when you’re 21, it seems like it’s free money, right? And then I discovered poker and they used to have a game of the Horseshoe that was like, $1/2 blinds, but no cap.

He even promotes this game on his social media account too.

Further, Rene has already been the brand ambassador for the US-facing Cardroom.

Is Rene Nezhoda Married? Who Is His Wife?

Yes, Rene from Storage Wars is a married man. And it’s been more than a decade since Nezhoda has been married to his wife Casey Nezhoda and the couple is still going great with each other.

However, exactly on what date they walked down the aisle is not known officially. But several sources claimed that the beautiful couple tied their knot on 1st January 2006.

In fact, Rene when went to the reality TV show Storage Wars, the TV star was there accompanied by his beautiful wife Casey. Even after so many years of marriage, the duo shares a great relationship.

They spent a lot of time with each other. Also, Rene’s wife Casey is his partner in his store Bargain Thrift Hunters. Further, both the husband-wife duo are actively promoting poker games on their respective Insta account and together handle their youtube channel too.

Nehzoda Is A Dad To His Daughter With His Spouse

From his long marriage with his wife Casey, Rene has a daughter named Tatianna. He has a beautiful bonding with his daughter who was born on November 1, 2006. His only daughter Tatianna is now a grown-up girl who is 16 years of age in 2022. On her every birthday, Rene keeps uploading a post wishing his daughter a happy birthday.

On 1st November 2019, he posted a post to dedicate his daughter which said,

Further on his daughter, we came to know that she plays soccer and also keeps showing up with her parents at different events.

Further, Rene Nezhoda is on Facebook too with 8.9k likes and 10k followers as of 2022. On Facebook, he alongside his wife Casey runs a fan club account, Rene & Casey Nehzoda Storage Wars Fan Club.

Besides, Rene with his wife also has a Youtube channel with the username @Bargainhuntersthrift which has 173k subscribers so far.

He has been a professional since the age of 11. Nezhoda does antique business and has also earned money from poker. In addition, he is also a known TV personality. So, undoubtedly, he has amassed a large amount of money over his whole career.