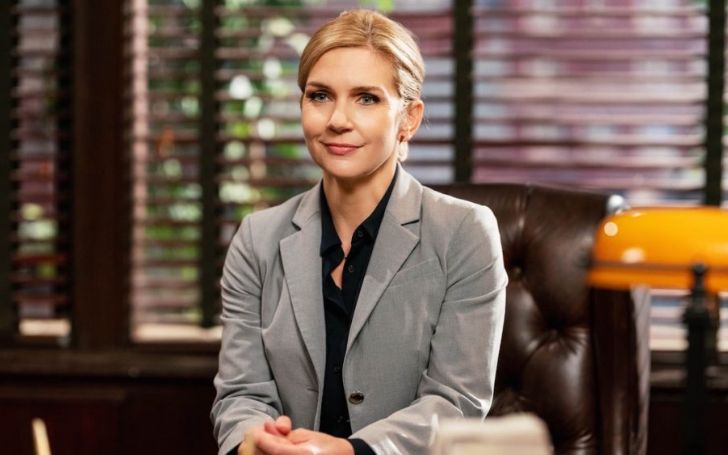 Rhea Seehorn is a stage, TV, and film actress from America. She is primarily known for her role as Kim Wexler in AMC’s Better Call Saul. In fact, her portrayal of Kim Wexler has tremendously helped her popularity, with both her personal and professional life becoming a subject in the media.

Well, let’s discover her professional accomplishments as a movie and TV actor, her family, parents, and every fact about her. Further, let’s also find out if Rhea Seehorn is married. If yes, who is her husband?

Rhea was born on May 12, 1972, in Norfolk, Virginia, the U.S. Born in a family of servicemen, Rhea spent her childhood in different places including Japan, Arizona, and Washington, D.C, as her parents moved frequently.

While her father served as an agent in the Naval Investigative Service, her mother worked as an executive assistant for the United States Navy.

As for a fact, she is very close to her mother and often shares her love for her mother. On the occasion of Mother’s Day, she posted her childhood photo of her with her mother on her Instagram. Check it out.

Talking about her education, Rhea graduated in 1994 from George Mason University with a degree in Bachelor of Arts in Studio Art, pursuing her passion for film and theatre.

Besides, she also has a knack for visual arts and studied painting, drawing, and architecture from a young age.

What is Rhea Seehorn’s Age?

Following her graduation, Rhea began her professional career in acting appearing in independent films. She made her acting debut in the 1997 TV series Homicide: Life on the Street.

Soon after this, in 1998, she made her film debut with A Case Against Karen, where she played Shari.

Here we have listed some of her successful movies and TV shows.

Rhea is most recognized for her role as Kim Wexler in the AMC TV series Better Call Saul. She has appeared in a total of 50 episodes of the TV series as of August 2020.

In the series, she plays a lawyer and the love interest of a character named Jimmy McGill played by Bob Odenkirk.

Check out this clip from Better Call Saul:

She Received Many Prestigious Awards For Better Call Saul

For the portrayal of Kim Wexler, 48, Rhea has also received many awards. For the 2015-2016 season of Better Call Saul, she received the “Satellite Award for Best Supporting Actress – Series, Miniseries or Television Film.”

Likewise, in 2017, she was awarded the Saturn “Award for Best Supporting Actress on Television.”

Similarly, she is also nominated for several awards for her role in the series. Here is the list of her nominations.

Rhea Seehorn Is Not Married But Engaged to Graham J. Larson

As of 2020, Rhea Seehorn is not married but engaged to fiance Graham J. Larson, a real estate agent.

They have been together for over 7 years, following their engagement in 2013. However, the couple only revealed their relationship later in 2015 as they became a subject after being spotted at the premiere of Better Call Saul on 29th January 2015, in Regal Cinema, Los Angeles.

They announced their relationship via an Instagram post and have since been regularly posting pictures of themselves together on socials.

Are They Planning To Get Married?

Having been engaged since 2013, their marriage is pretty obvious. But Rhea and her fiance Graham have not revealed their wedding plans as of yet.

It seems they are pretty happy unmarried and are apparently living a blissful relationship.

In fact, on the occasion of Valentine’s day on February 14, the couple took to Instagram to post a picture as they spent a day together at the de Young Museum.

Well, it’s hard to believe how the two share such a bond despite being together for over 7 years. We can’t wait to see them get married.

Rhea Seehorn’s To-Be-Husband Was Married In The Past, Also Has Children With Ex-wife

Unlike Rhea, her future husband Graham was married in the past. He was reportedly married to Mary Alice Haney. In fact, he also gave birth to two children with his ex-wife.

The real estate agent took to Instagram to share a cute picture together with his sons on the occasion of Father’s day on May 26. 2017.

No doubt, Graham shares a strong bond with his kids and so does Rhea.

Seehorn is a Close Friend of Graham’s Ex-wife, Mary

While it might be surprising to many, Rhea is close friends with her fiance Graham’s ex-wife Mary. In fact, Mary was the one who introduced Rhea to Graham.

Rhea talked about her friendship with Mary in one of her interviews with Seth Mayers. Talking about how they got together, she said,

I was in a salon in L.A and talking about dating with this fabulous woman named Mary Alice Haney who makes incredible dresses. We were just talking for 30 minutes and I was thrilled to make a great girlfriend in L.A and she said, ‘I know who you should be dating’ and she set me up with what turned out to be her ex-husband.

She Has a Net Worth of $3 Million

As of 2021, Rhea has a net worth of $3 million. She makes a major part of her earnings from her TV appearances. Reportedly, she receives a salary of $40,000.

Similarly, talking of her future spouse Graham, he is worth $5 million.

All You Need To Know about AMC series Better Call Saul