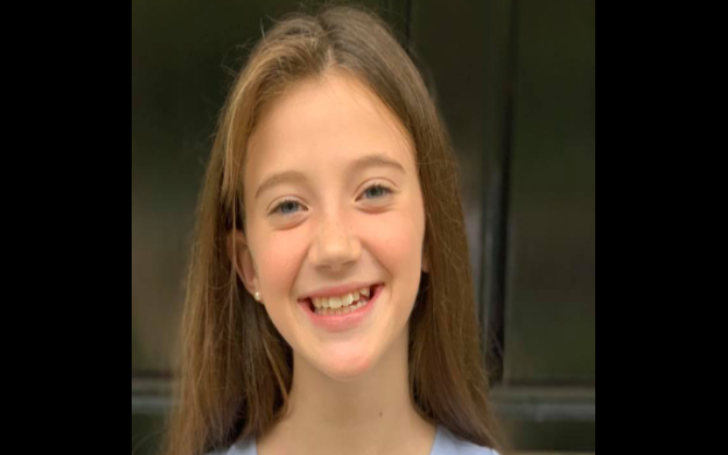 Riley Norah Tracy is the youngest daughter of CBS reporter, Norah O’Donnell and her husband, Geoff Tracy. Although, the junior-most, Riley is growing fast so much so she towers over her older siblings and now with her cute adolescent charm managed to generate some curiosity among the public.

Norah and her husband have pretty much shared all about the upbringing of their children including Riley’s. So, let’s look at some of those moments from Riley’s life — from her birth to her recent most activities.

Her maternal grandparents, Noreen Bernadette (O’Kane) and Francis Lawrence O’Donnell were respectively a doctor and US Army officer.

Riley Norah Tracy Siblings: She Is The Youngest Child

Riley is the youngest of Norah and Geoff’s children. Before her, the couple welcomed twins Grace and Henry on May 18, 2007. Grace the eldest and a minute older than her womb-mate, Henry, says O’Donnell in Baby Love. Henry, however, was the most dominant person in the family while growing up.

During toddler years, Grace overflowed with passion and energy and took after her Granny Franny. Norah describes her as a compassionate kid who is sincerely interested in the feelings of everyone in the room. Growing up, she enjoyed jumping off of just about anything and always had skinned knees and bruises from playing at the park.

Like her younger sister, Grace is also a good eater, she enjoys yogurt, pancakes, and bubbly water. The first child of Norah and Geoff’s favorite colors are purple and pink. In fact, for some time during her early years, she believed that everything in the world pink was hers.

Henry is famous among the family as Hank the Tank. He was born smaller than his twin sister. He had a furrowed brow as a newborn that made him appear more serious than any baby should.

In the book, his mother claims, Henry has the most beautiful red hair and has grown into a very handsome and strong boy. Of the three, he was the first to figure out how to open a door and knows how to use the key to start the ignition in the minivan.

The only son of Norah and Geoff loves guitars, watering flowers, scooters, vacuums, and hunting acorns. His favorite color is blue because Grace told him so. Henry’s favorite foods are bananas and raisins although he later developed a regular hankering for fresh pasta and marinara from Daddy’s restaurant.

O’Donnell’s newscast received 7,437 million views in April of 2020, making her the most-watched woman in national TV news. The mother of three was formerly the co-anchor of CBS this morning and worked for NBC News for over a decade.

Washingtonian Magazine regarded her as one of Washington’s 100 most powerful women.

The 47-year-old won two Emmys on separate occasions, one as part of NBC News’ Election Night coverage team in 2008. The other one she received for her six-month investigation and report on Sexual Assault in the Air Force Academy for CBS This Morning.

Her Father Is A Celebrity Chef

Similar to her mother, Riley’s father, Geoff Tracy’s achievements are no short of titles and recognitions. Her father is no less than a celebrity chef and a successful restaurant businessman. He owns more than six restaurants in the Washington, D.C. area alone including others in Virginia, Maryland, and few more states.

Some of his accolades include The Best Neighbor Award, Chef of the Year Award, RAMMY award for “Hottest Restaurant Bar Scene,” “Best Restaurant in Chevy Chase,” Best Local Chef,” among others.

Riley Norah Tracy Parents Are Very Close To Each Other

Riley’s parents, Geoff and O’Donnell married each other on June 8, 2001. They first met at Georgetown University where both of them were students.  They got engaged at a dinner at French Laundry, Thomas Keller’s legendary restaurant in Yountville, California.

In an interview, O’Donnell said she and Tracy, together, painted the walls of the latter’s first restaurant, as they could not afford painters or contractors.

Riley And Her Siblings Get Limited Screen Time

With CBS Watch Magazine, Norah shared she and her husband make sure their children including Riley get limited time with their phones. O’Donnell also said she likes to do a series on that.

She added it’s the number one issue affecting most parents, and it has to do with the health and well-being of their children.

Tracy and O’Donnell have rules: No phones after 8:30 p.m. or at breakfast, lunch, or dinner. They also forbid their children from using phones in the car.

Whenever they’re in a family environment, no phones because they have to talk to one another, and they have a device in the house where after an hour or an hour and a half, they’re allowed to text us, but it shuts off everything else.

She Gave Her Mother Her Funniest Mom Moment

With Posh Seven, Norah shared the time when Riley gave her the best mom moment. She recalled the incident when she was busy putting her three kids to bed when the Today show called and asked for a piece on Sarah Palin’s new book.

O’Donnell did not have a babysitter and was in real trouble. She turned on Elmo and plopped her kids in front of the tv. She got her computer and blackberry and hid in the corner of the nursery.

While the anchor-mom was writing her story, Grace used the portable potty to take a pee. Seconds after she finished, Riley then one, went over to the potty – picked it up and flung the full pot across the room. Consequently, the nursery was covered in pee.

Riley Norah Tracy Was A Lean Kid As A Child

In her book, Baby Love, Norah O’Donnell says Riley has always been 99th percentile on height and very lean like her elder siblings. The reporter-mom adds she is so tall for her age that people think she has triplets.

In the book, O’Donnell further reveals Riley was a perfect baby and slept through the night from the start. She isn’t a fussy eater. Her favorite foods are Alba’s Chicken Soup, strawberries, and arbolitos (that’s Spanish for little trees, which is broccoli).

Riley Norah Tracy also loves chasing the cat, swimming lessons, and cuddling. She is fond of rock ’n’ roll and will jam to the music. She also giggled anytime she got to wrestle with her siblings. The youngest of Tracy and O’Donnell’s children’s favorite color is green. Riley has also participated in few junior golf tournaments.