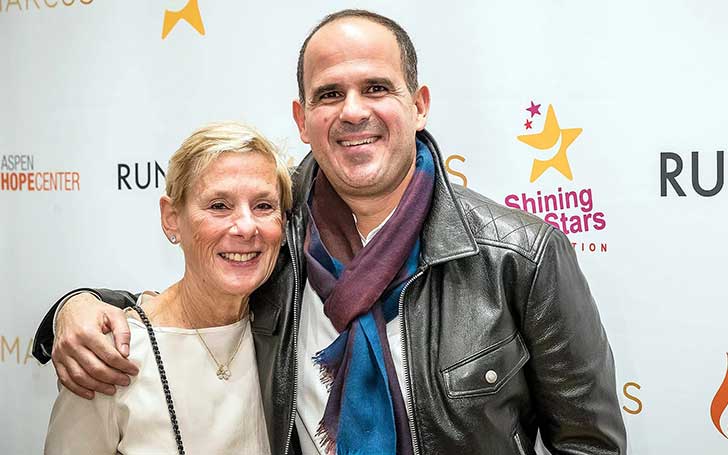 Roberta “Bobbi” Raffel is an American businesswoman and entrepreneur. Besides, Raffel is famous as the wife of renowned businessman and reality star, Marcus Lemonis.

Even though Roberta was leading a successful career as a businesswoman, she never gained limelight. Until she met her husband Marcus in 2016.

Bobbi Raffel’s husband Marcus is a self-made millionaire and the owner of Marcus Lemonis LLC, which has links to many product lines. He generates most of its revenue from one of his multimillion company named Camping World.

So, how was her life before she met the business magnet? Let’s talk here in detail.

Roberta celebrates her birthday on 21 September. She was born the first of three children of her mom Millicent and dad, Kenneth Fenchel. She has a brother, Stephen Fenchel, and a sister, Mickey Fenchel Sima.

Roberta’s father Kenneth was a WWII veteran and a staunch supporter of the Lamp Industry in Chicago. Both of Raffel’s parents have passed away. Her mother died in November 2018 while her father ascended to heaven in 2013.

Raffel often recalls her days with her siblings and her parents on her social media posts. To this day, Bobbi always shares pictures of her late folks on their birthday.

Happy birthday to our greatest mother ! We all miss you everyday ! You will be in our hearts and memories forever ! We were blessed to have you in our lives and you gave us everything you could always!! Our bond can never be broken and we will share your thoughts and words with our families all the time!!

As you can see, Roberta is often seen with her siblings as well which means they are close as a family.

Roberta Raffel is a businesswoman by profession. As per reports, Raffel previously owned a fashion business that her husband purchased shortly before they started dating.

Ever since Roberta married Marcus, she has been supporting her husband to expand his business ventures directly or indirectly. As of now, Raffel manages many of her spouse’s different business ventures.

The businesswoman has given more than four decades of her life in business and entrepreneurship. Nonetheless, her earning and net worth are a mystery to the public as of yet.

On the other hand, her hubby, Marcus Lemonis has a beautiful net worth of $500 million. Lemonis runs multiple businesses. As of now, he serves as the chairman and CEO of Camping World, Good Sam Enterprises, Gander Outdoors, and The House Boardshop.

Marcus Lemonis Roberta Raffel: Details of their Wedding in 2018

Roberta is living a happily married life with her husband Marcus Lemonis for two years. Roberta and Lemonis have a huge age gap of 20 years, yet, the couple never had problems with their age difference.

The husband-and-wife exchanged their vows on 17th February 2018 at the Hotel Bel-Air in Los Angeles, Californa.

Sources reports, the couple had planned to tie the knot in January in Montecito, California, however, their plans got ruined due to the mudslides in California.

Both Raffel and Lemonis wrote their vows themselves. “Mine was longer since I already talk too much,” Lemonis said. Meanwhile, the newlyweds had also planned their honeymoon, however, they didn’t go on vacation until later 2018 due to Marcus’ shooting schedule.

Roberta and Marcus don’t have any children together.

They Engaged on Christmas 2016

Roberta met her future husband, Lemonis in 2016 at the COTERIE trade show. Both Lemonis, the CEO of Camping World, and Raffel were buying for their individual businesses at the show.

Talking to People, Lemonis recalled the moment he met Roberta. He said she tapped him on the shoulder and told him: “‘Hey, buy my business.'”

They started dating shortly after their first meeting. The pair is pretty open about their relationship since its inception and often shares it through their social media.

After just months of dating, Lemonis popped the question to his then-girlfriend on Christmas 2016. Lemonis said: “I proposed on Christmas in a secret Santa gift. Thank goodness it went to the right person.”

Roberta is a mother of two kids: Who is her former partner?

Roberta is a proud mother of two children a son and a daughter. The identity of her kids’ biological father is still behind closed doors. However, she was previously in a relationship with a man named Les Raffel. We found out about her partner through her father’s obituary.

Besides, she frequently shares photos with her grown-up children photos on her social media.

Bobbi’s son is 42 years old and is a teacher by profession. He is happily married with children. Likewise, her daughter is also married and has two children with her husband. Roberta’s daughter has been pursuing a career in fashion.

Meanwhile, the television star and entrepreneur, Marcus Lemonis was previously married. Lemonis married his first wife Ila Penfold in 2003 and the pair officially ended their marriage in 2017. From his first marriage, he doesn’t share any children.

Roberta is an enthusiastic business person. Ever since she met her spouse Lemonis, they have also been connected on a business level.

As of 2020, Bobbi is one of the top business partners of Marcus. In fact, she has already invested $1.3 million in Camping World, buying 99094 shares, which makes her the co-owner. Camping World is one of the most successful companies that sell camping gears of all kinds and recreational vehicles as well.

In addition, Robert’s hubby Marcus has a staggering net worth of $500 million. He earns the majority of his wealth from his several business ventures.

Aside from his holding company Marcus Lemonis LLC, which deals with a variety of product lines, most of his worth is generated from his multi-million company called Camping World. He has not only been featured in numerous authoritative shows, blogs, and magazines but was named the Newsmaker of the Year in 2008 by RV business magazine, as well as Entrepreneur of the Year by Crain’s Chicago Business.