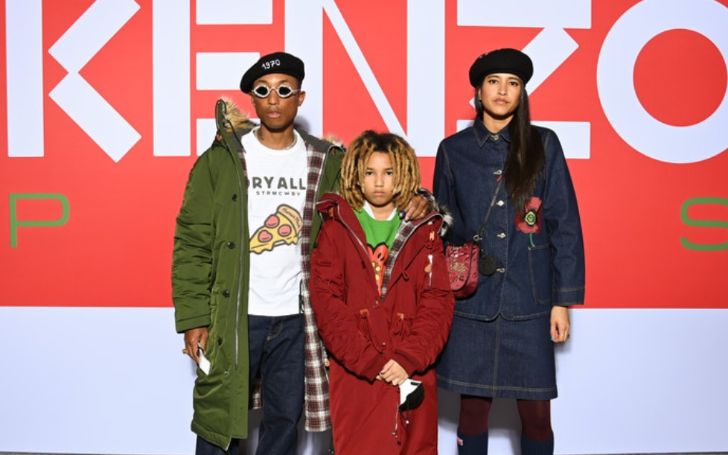 Rocket Ayer Williams is one of the star kids with the most sophisticated lifestyle in Hollywood. He is the eldest son of the famous singer, songwriter, and musician Pharrell Williams. His father Pharrell is widely famous for his rap shows and concerts too.

Born into a worldwide famous family, Rocket’s parents tried to keep the child away from the media. Yet Williams who is considered one of the coolest children in Hollywood has made a couple of public appearances with his parents.

Well, here, in this article, we will get to know more facts about him including the meaning behind his unique name, upbringing, and everything else.

Rocket Ayer’s Early Life: He Was Born Before His Parents’ Marriage

Rocket Ayer Williams was born on November 15, 2008, in the United States of America. He is the eldest child of musician Pharrell Williams and fashion designer and stylist Helen Lasichanh. He was four years old when his parents married officially.

Although Rocket looked quite absent from the media initially, the star kid started making public appearances lately. Back in October 2021, the 14 years old was seen enjoying some quality family time in Egypt with his parents.

At the time, his musician father Pharrell also shared a rare family photo with his wife and son on his Insta.

What is the Meaning Behind Rocket’s Name?

Rocket’s father himself being a musician, has a lot of respect for fellow and senior musicians. That’s what made him name his son after four prominent musicians. In an interview talking about the naming of his son Rocket’s name, the Happy singer said,

Metaphorically it was because of Stevie Wonder’s ‘Rocket Love,’ Elton John’s ‘Rocket Man,’ and Herbie Hancock’s ‘Rocket.’ All of my favorite musicians,”

He also added about his middle name,

“His middle name is not Man, it’s Ayer, after Roy Ayers.”

The legendary singer also said, “In the same way that the Indians name their children behind a force or an animal, or an element, we named him after a manmade machine that was meant to go up, meant to ascend.”

Rocket is currently residing in Miami Florida with his parents.

What Is Rocket Ayer Williams Involved In? Some Interesting Facts About Him

Ayer who is currently 14 years old now must be pursuing his studies in one of the well-facilitated schools in the US. He is very fun-loving and enjoying his life with full of grace and happiness.

Also, Ayer seems to love skating. His father usually uploads pictures of him skating on his Instagram account. Besides, both of his parents are popular for their unique way of styling their outfits. So, it looks like, they have also given this feature to their son too.

The star kid is loved and admired for his looks by many. In fact, the child had curly blonde hair as a baby but now they are quite different. He looks handsome and slays his brown dreadlocks.

Ayer always loves to accompany his father by dressing similarly to him. Also, the kid looks like his father’s clone. Back in 2018, William had the distinct honor of sitting in the front row at the Chanel Cruise 2018/19 Replica Show in Bangkok alongside his father.

This musical star Pharrell Williams started his musical journey in the 1990s. He formed a four-piece “R&B-type” along with his friends and named themselves The Neptunes. They later produced Jay-Z’s single “I Just Wanna Love you” and Nelly’s single “Hot In Here” in the year 2002. They got their breakthrough when Gwen Stefani’s single, “Hollaback Girl,” they produced entered the Billboard Hot 100 at number 82.

His first-ever solo album, In My Mind, was released in 2006. The album also entered the US Billboard and brought hype to William’s career as it debuted third. His prominence rose gradually as the singer launched several other hit albums later on.

Furthermore, Pharrell joined hands with several famous singers and musicians. He worked with Madonna for her album, Hard Candy, and with Shakira on several of her songs like Did it Again, Why Wait, Good Stuff, and Long Time.

The singer released his second album, Girl in 2014. So far, Rocket’s father has won 13 Grammy awards.

Rocket’s Mother: Helen Lasichanh Is A Fashion Designer And A Model

Rocket Ayer William’s mother, Helen was born on 22 July 2022 in Florida. She grew up in Miami. She was a very bright student and very actively participated in several activities in schools and colleges.

In fact, Helen is blessed by a great height of more than 5’11, making her even taller than her husband, Pharrell. Many noticed and loved her puffy outfit that looked like a giant red cloud at the Met Gala 2017.

Lasichanh previously used to work as a Miami-based fashion designer, stylist, and model.

How Did Rocket’s Parents Get Together? About Their Marriage

Rapper Pharrell had to work very hard to impress Rocket’s mother. They met for the first time in the early 2000s. Pharrell was immediately attracted to Helen’s personality but the model never looked twice at him. She then was in a committed relationship with someone else.

Pharrell once in an interview with Oprah mentioned that Helen always ignored his texts and calls. After two years of patience, Pharrell finally won over Helen. After being in a relationship for 5 years with a lot of ups and downs, they decided to marry.

Their marriage is considered the most fun event ever to have been attended by the guests till that time. The couple got married on 12th October 2013 at Kampong National Tropical Botanical Gardens in Coconut Grove, Miami Florida.

At the time of their marriage, their son Rocket was 4 years old. The Williams couple dressed uniquely, as usual, wearing tartan outfits from top to bottom. Even the guests present there were dressed in either plaid or tartans.

Rocket Williams Has Siblings Who Are Triplets

Rocket Ayer William’s parents gave birth for the second time in 2017. Helen gave birth to triplets. Unlike their elder brother, the triplets are not in any of the pictures in the media. We don’t even know about the gender of the three children.

We can guess that the couple wants to keep their young children out of the Hollywood light for their good. Rocket is a very good influence on his younger siblings.

The only time, Rocket’s father mentioned his triplets in media was in an episode of The Tonight Show. The singer also revealed his three kids harmonize when they cry and that for him, life with them was going fun.

As we said earlier, his father is one of the leading rappers and musicians in the industry today. Pharrell has an estimated income of around $250 million. Rocket’s mother, Helen also has a net worth of $5 million as of the year 2022.