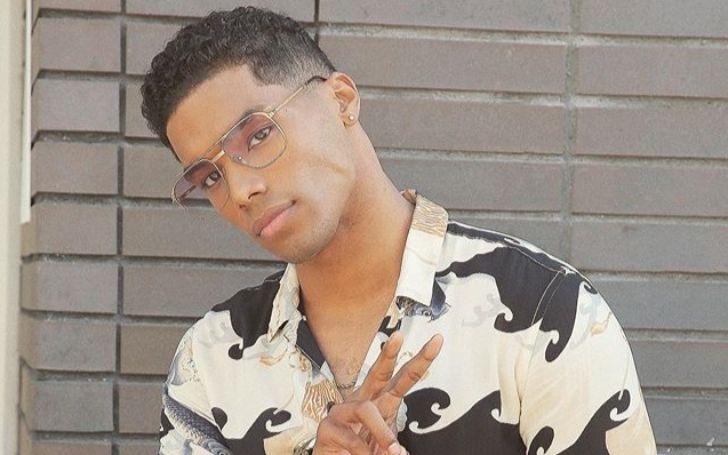 Rome Flynn is a huge name in the industry after his back-to-back terrific performances in numerous TV shows. For his performance on the CBS daytime drama The Bold and the Beautiful, the actor won the Daytime Emmy Award.

But Rome wouldn’t be here if it wasn’t for his mother who raised him and his siblings as a single parent. His father had left the family a long ago and her mom had to take full responsibility.

Let’s take a look at his family life and get up close and personal with the handsome hunk.

Who are Rome Flynn Parents?

Rome is the eldest son of Nickey Alexander, a chef. We’ve all heard the saying ‘Started from the bottom now we’re here,’ and it sticks true to Rome’s life.

He grew up homeless alongside his mother Nickey Alexander and his seven siblings. However, Rome’s mother, not even for a single day, complained. And after years and years of hardship, it all finally paid off. All of her kids are in a better place now, especially her son Rome.

What about Rome Flynn’s Father?

Rome’s mom single-handedly took care of him and his siblings. This leads us all to one specific question and that is, where was his father, and who is he?

It looks like Rome and his siblings never really had a father figure in their lives. Maybe this why, Rome refrains from talking about his parents in any interviews or shows.

Regardless, Rome has a deep affection for his mother. He even takes her to various red-carpet events as a date.

Raised with Seven Siblings by his Single Mom, Nickey Alexander

His sister Rekeea is a Make-up artist, who is married and a mother of three kids.

On the other hand, his brother, Nino is a hip-hop artist. He too has kids.

After Rome came into the world, his family moved to Springfield. Initially, he along with his mom and two siblings were homeless. Their situation was dire and they used to spend holidays at local shelters.

The actor graduated high school from Lanphier High School. Later on, he started studying at the Benedictine University on Basketball scholarship.

In a surprising turn of events, Rome’s career never took off in sports but in the entertainment industry. Before he could become a big NBA star, a national talent scout spotted him via his social media profile. Soon he began his career in acting and singing.

Rome Flynn is of Mixed Ethnicity

We often wonder that Rome has surprisingly good genetics and as it turns out, it is all because of his ethnic background. He comes from the mixed ethnicity of Afro-Cuban and Irish.

Rome’s mother runs a restaurant Nickey’s Southern Style Kitchen in Springfield, Illinois. She opened the restaurant in 2017, in an effort to give back to the community.

The Flynn Family Gives Back to the Community

It was a small effort from her side to make her community feel at home. Given the circumstances she and her kids faced, helping the poor was something she wanted to do for a long time.

She stated at the time, “It was a like a family goal or a promise: If we ever get to a point where we can make someone’s life a little easier, a little happier, we would.”

Since then Nickey and her eight kids always open their doors for the needy and the poor right at the Holiday season.

Take a look at the video and find out what Nickey feels about giving back to Community!

Not just the homeless, but Nickey’s exemplary cooking skills were even liked by big celebrities as well. Rome told in an interview that once he brought his mom to the set of Murder. At the set, she cooked a meal for everybody.

Ever since then, actress Viola Davis still asks him if Nickey is ever gonna come back and cook for them again.

The 28-year-old actor made his mainstream debut with the movie, Drumline: A New Beat in 2014. His critically acclaimed work came the next year when he was cast in The Bold and the Beautiful. He played the role of Zende Forrester. For his role, he even won the Daytime Emmy Award for Outstanding Younger Actor in Drama Series.

After a series of short roles, he nailed his big role in the show, How To Get Away with the Murder. He came as a guest in Season 4 but in Season 5, he became a series regular. He portrayed Gabriel Maddox.

Furthermore, the actor played Tony in Family Reunion in 2020.

With more movies upcoming, Rome is bound to become a huge star. Meanwhile, his net worth sits at $500,000. He makes fortune from his multiple endeavors including acting.

Firstly, let’s address the elephant in the room. Currently, Rome is single and not in a relationship. The statement must’ve been a real shocker because the actor was most recently dating Camia Marie.

It looks like the former flames have gone their separate ways, due to undisclosed reasons. After the break-up, Camia has a new boyfriend and the couple has been dating since 2019.

This means she parted ways with Rome some time ago. Rome and Camia dated from 2015.

Previously, he was in a relationship with Molly Noriko Hurley. From their relationship, the couple welcomed a daughter, Kimiko Flynn. Molly gave birth to Kimiko on December 12, 2014. Despite their separation, the pair raises their daughter together. The majority of the time, she stays with Molly and sometimes with Rome.

Rome had etched several tattoos around his body. In each of his biceps, he inked the name of his two siblings among seven, Wisdom and Love. Moreover, the stars surrounding his tats represented his big family including his mom and dad.

In addition to the arm tattoos, he inscribed his first tattoo on the chest. He inked the famous saying, ‘Only God Can Judge Me’ along with his full initials.

But after the birth of his daughter, Rome decided to remove his chest tattoo. In a video, where he is talking about the tattoos and the inspiration behind his action, Rome mentioned it is all for his baby girl. Plus it’ll also help to further his career.

Who Is Camia Marie? Is She Married? Relationship With Rome Flynn

Who is Rome Flynn Wife? Is it Camia Marie? Shares Daughter with Molly Noriko Hurley