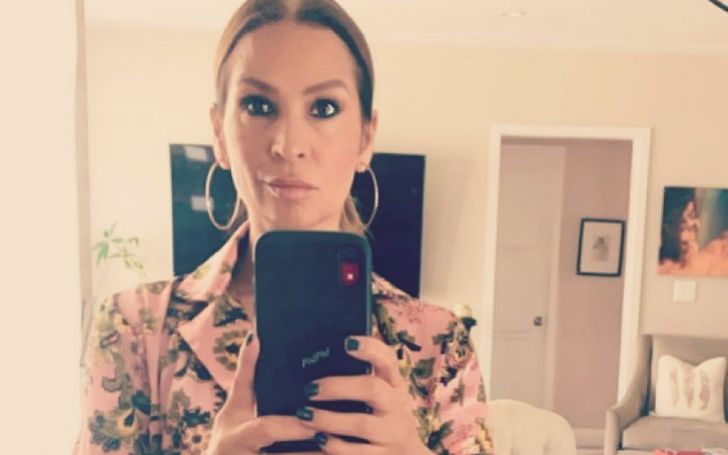 Rose Mendez is a professional makeup artist and beauty & fashion expert. She previously worked as a makeup artist for MAC Cosmetics for several years. Additionally, Mendez is the producer and creator of Wide Awake & Dreaming.

Apart from her multiple works, Mendez is also the proud mother of three children including an American actress Alexa Demie. Her daughter is better known for her role in the HBO teen drama Euphoria. Sources say, the makeup artist gave birth to Alexa at a very young age and later raised her single-handedly.

So, it is evident that many people are curious to know who is her children’s biological father? Is Mendez still together with her baby’s dad? If not, who is Rose married to in 2022? Here are the details on Rose’s new husband, parents, and more!

How Old is Rose Mendez? Her Ethnicity and Nationality

As of 2022, her age is 55. She was born on 30th September 1966, in Michoacan, Mexico. Apparently, many online tabloids wrote Rose was born on 25th October 1979, making her age 11 at the time when the makeup artist gave birth to her daughter Alexa in 1990. So, would you believe Rose became the mother at 11? Obviously not, thus, the latter birth detail is completely wrong.

Besides, when Rose was an infant, she immigrated with her family to the United States from Mexico and they settled in Los Angeles. As per sources, the artist as a teenager spent most of her time rolling in the 1980s Hollywood club scene.

As for her nationality, Mendez has dual citizenship Mexican and American. Her ethnicity is Mexican-American.

Who Are Her Parents? Her Family Details

Rose is the daughter of Salvador Mexdez Aguilar (father) and Martha (mother). Both of her parents are from Mexico, while her late dad was born in Tlazazalca, Michoacan De Ocampo.

Sadly, both her father and mom died. But, Rose keeps posting about them on her social media feeds on several occasions like birthdays, mother’s day, and a few more. Back in May 2021, the artist shared a young photo of her mom on the occasion of Mother’s Day. She wrote the caption,

What is Rose Mendez Doing Now? Details on Her Professional Career

As we mentioned above, Rose made her move to the United States at a very early age and gradually started exploring great opportunities there. She later graduated from University High School, Los Angeles.

As of now, Alexa Demie’s mother is a producer and creator of the company named Wide Awake & Dreaming. She formed the organization in 2009 and has since been a part of it.

Prior to Wide Awake, Rose was also a makeup artist for MAC Cosmetics for about six years from 2003-09. She once worked for CHANEL, a French luxury fashion house.

In addition, the artist has also mentioned herself on her Linkedin profile as an “Experienced Producer with a demonstrated history of working in the entertainment industry.” She also wrote that she is, “Skilled in Video, Music Videos, Feature Films, Film, and Independent Film.”

Rose Gave Birth To Her Daughter Alexa at 23

As mentioned earlier, Rose is the mother of three grown children. She gave birth to her first child, a daughter Alexa on 11th December 1990, in Los Angeles, CA.

While growing up in the filthy neighborhood of Atwater Village, Demie used to live in the apartment across the street from a meth lab. Being around such a badest environment, it is safe to say, Alexa didn’t have the privilege of a healthy upbringing. She once also recalled her childhood without being a good male figure,

“I didn’t have a great male figure in my life so I think I grew up being a bit hard on men. I wasn’t a cheerleader, I was a bit of a loner in high school.”

Despite her dark early days, Demie has eventually made a name for herself in the entertainment industry. The 31-year-old is an actress with a couple of movies and TV credits under her belt. She landed her first professional role in Ray Donovan in 2016.

The following year, the actress also snagged the role on the big screen, playing Merideth in the movie Brigsby Bear. Her other acting credits include Mainstream, Love, The OA, and more.

Since 2019, the actress has been a star in the TV series Euphoria.

Mendez Is the Mother of Two More Daughters: Her Second-Born Girl is a Designer

In addition to Alexa, Rose has two more kids. She gave birth to her second daughter Falize Rome in Sept 2000. She is an Instagram model and a designer. Furthermore, Falize is the owner of the clothing line named RomebyFalize.

Similarly, her third daughter’s name is Tahlia Rose who was born in April 2009. Rose regularly shares his pride for her children on her social media handles.

While the details about her children are already there, what about her kids’ father?

Was Rose Mendez Ever Married to Her Children’s Father? All About Alexa Demie’s Father

If online tabloids are to be believed, yes, Rose was married to her baby Alexa’s biological father whose name is Scott Wilson Vanerstrom. However, other details about their love life including their initial romance, wedding, and more are still behind closed doors.

A little is known about him is that Scott is the adopted son of Dennis Wilson, a singer and songwriter, who co-founded the Beach Boys. As a matter of fact, the late artist adopted Scott while still married to his first-wife Carole Freedman.

Besides, talking about the biological father of her two daughters Falize and Tahlia, it is most probably Rose’s second husband. So, let’s find out how long the makeup artist and her second spouse are together?

Has Rose Mendez Remarried? If Yes, Who is Her Second Husband?

Although her first marriage with Scott was short-lived, Rose has been in a beautiful marital relationship with her second hubby named Brandon Astudillo-Mounier.

Although the exact date of their wedding is still missing, the duo exchanged their vows in Carlsbad, CA. Back in November 2016, Rose posted a throwback wedding picture of themselves on their anniversary on her Facebook and wrote,

At present, the couple resides in Glendale, California.

Rose’s estimated net worth is $1 million. She has earned such a good amount of money from her versatility in multiple fields. On the other hand, her actress daughter Alexa’s fortune is $3 million.

Who Is Chrissie Heughan? Her Bio, Relationship With Sam Heughan