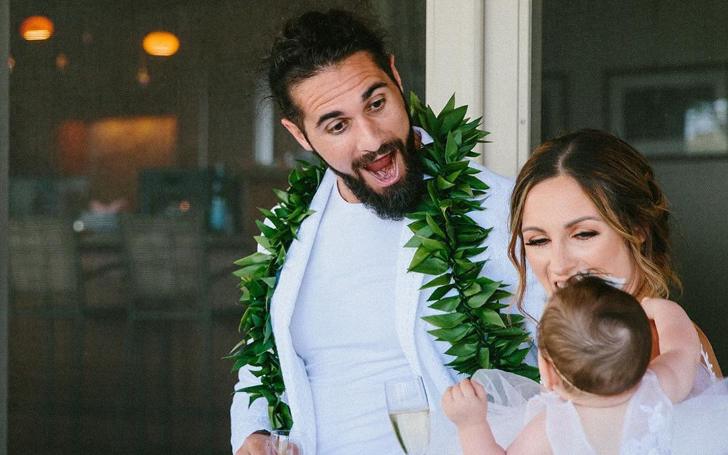 Roux Lopez is best known as the daughter of an Irish professional wrestler Becky Lynch (aka Rebecca Quin). Her mother is one of the most recognizable WWE wrestlers who was listed in the sixth position in the 2019 Top Female Athletes Worldwide.

Like her mother, Roux’s father Seth Rollins is also a professional WWE wrestler who performs on Raw. In the wrestling world, both her parents have gained a wide form of recognition. So, as a child of well-known wrestlers, people want to know about the life of Roux Lopez.

So, today we are here to talk everything about baby Roux Lopez including some details on her parent’s relationship and marriage. Let’s get right into it.

When Does Roux Lopez Celebrate Her Birthday? Her Birth Details

Becky and Seth Rollin’s only child, Roux celebrates her birthday on the 4th of December every year. She was born to her famous parents on December 4, 2020, in the United States under the birth sign Sagittarius. Her birth brought joy to her parent’s life which both her mom and dad expressed through their respective Instagram account.

Three days after her birth, her mamma shared an image of her holding Roux’s hand together with Seth, and wrote,

“Welcome to the world Roux, “You are the love of our lives.”

Likewise, Roux’s father Rollins also shared the same image with the caption “And New.” As of 2023, the celebrity child is 2 years of age.

Besides, she is the niece of a professional wrestler, Gonzo De Mondo.

Meaning Behind Roux’s Name; How To Pronounce Roux Lopez?

As per sources, Roux is a French word that originally came from the Latin language. In French, Roux means ‘russet’, a potato. Further, the word has multiple meanings. It is used to denote the dark-brown color with a reddish-orange tinge or in culinary, a mixture of fat and flour, and so on. In what sense, her parents named her Roux is not known however, her name really matches her auburn-hair.

Moreover, the pronunciation of Roux is ‘Roo’, or ‘Rue’.

Seven months prior to Lopez’s birth, her mom Becky announced her upcoming arrival in the episode of RAW. Further regarding the pregnancy with Roux, in an exclusive talk with People, Becky said that she always wanted to have a child. In this regard, Lynch said,

“I’m just so career-focused that it became one of those things that, when you’re chasing a dream for so long, I always wondered, ‘Am I going to get around to it? Is it going to happen for me?’ “

And finally, with the birth of Roux, her mom Becky’s dream of becoming a mother was fulfilled. Now, Roux is being raised by her parents with so much love and care. No doubt that she was born with a silver spoon in her hand, so Roux Lopez is growing up in a luxurious lifestyle.

Roux’s Mother, Becky Is One Of The WWE’s Highest Paid Wrestler

Born on January 30, 1987, Becky grew up watching professional wrestling alongside her brother Richy. As a teenager, she started getting training in Wrestling. She joined a wrestling institute in June 2022 and after five months, she debuted as a professional wrestler using the ring name Rebecca Knox.

Slowly and gradually, she kept participating in several championships. She even won a couple of gold. Eventually, after a decade of her wrestling journey, she signed a two-year contract with World Wrestling Entertainment (WWE). After that, her popularity increased being the first woman to hold the titles of both RAW Women’s Championship and SmackDown Women’s championship simultaneously. As of now, she has become a four-time WWE women’s champion.

Her Father, Seth Rollins Is Also A WWE Champion

Born as Colby Daniel Lopez, Roux’s father Seth is considered one of the best wrestlers of WWE. He debuted as a wrestler in 2005 and in his professional wrestling career, he won several championships including the ROH World Tag Team Championship, the 2009 Survival of the Fittest tournament, the FIP World Heavyweight Champion, and others.

In 2010, Rollins signed with WWE and began wrestling under its development territory Florida Championship Wrestling. He rose to fame and superstardom when he became a major part of The Reality Era and The New Era. To date, he has won 15 championships in WWE.

The WWE superstars tied the knot on June 29, 2021. In 2022, the beautiful married duo celebrated their first marriage anniversary. Roux’s parents Becky and Seth are now a happily married couple.

On this occasion, Lynch shared some of their beautiful wedding photos with the caption,

One year ago I married the greatest man I’ve ever known. @wwerollins

The pair had planned to get married in the year 2020 however due to COVID-pandemic, they hold off their plan to marry and fully enjoyed each other’s company as a girlfriend-boyfriend. Initially, they made their relationship official in May 2019. So, before marriage, Seth and Becky dated each other for two years.

As of today, Roux is just a two-year-old baby but still, her presence has inspired her successful parents, mainly her father.

Regarding this, her dotting father once stated,

“It’s one of those things – for me, it’s extra inspiring. You wanna work harder to make the kid proud and earn as much of a living as you can to provide for that person.”

..but at the same time, she’s obviously made me think about things in a safer way.”

Looking at this, we can say that Seth Rollins has been a caring father to his only child Roux since her birth and the same thing goes with her mom as well.

Where Is Roux Lopez Living Today?

As per reports, her father Seth Rollins owns a house in Davenport, Iowa worth $1 million. So, as a baby daughter, Roux must be living in her dad’s house which has been given the name ‘Rollins Mansion’.

The celebrity daughter has a luxurious life inside her father’s huge mansion.

Both her parents Seth and Becky are millionaires. If talked individually, Roux’s mom has an estimated net worth of $7 million as of 2023 while her dad Seth Rollin’s net worth is $9 million which they amassed through their accomplished wrestling career.