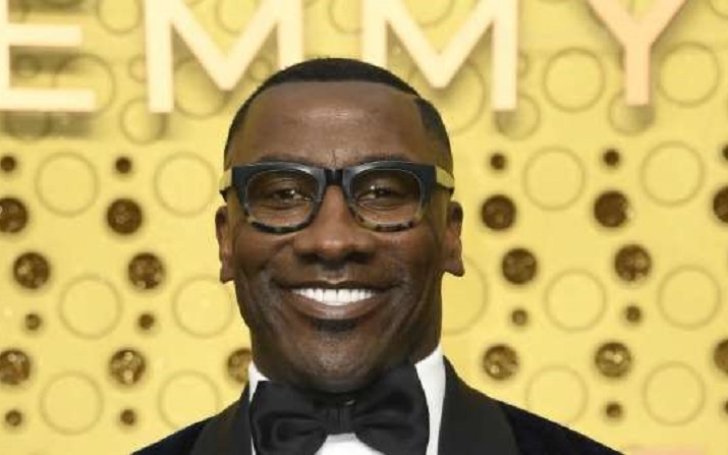 Despite his professional successes, Sharpe’s personal life looks a little bit complicated. The former footballer remains single after his separation with his fiancee Katy Kellner. Did the couple ever turn their romance into a marriage?

Several of his fans also eagerly want to know who is Shannon Sharpe’ wife? Let’s take close look at his ultra-private love life including his kids and current relationship status.

Rumors of Shannon Sharpe Wife: Is he Married?

He was in a romantic relationship with his then wife-to-be, Katy Kellner. The couple shared terrific chemistry for several years.

The kind of romance they had as a couple had many already assume that they were married. But as the matter of fact, Kellner never had the fortune to be Shannon Sharpe’s wife.

The couple first met in the gym and subsequently began dating. Their same love for fitness brought them together. Katy stated,

“Working out is a passion for Shannon and me. In fact, our romance began in a gym.”

At the time they both were quite busy on their career paths as Katy was a teacher and Shannon was a commentator at the CBS Sports pre-game show The NFL Today at the time. But, they always found time for each other. The two used to attend Flywheel Sports spin classes together on a regular basis. Apparently, they used to lift weights as well.

They turned their workout sessions into a great opportunity to spend quality time together and on the same time, stay healthy. Kellner said their daily fitness training also helped them to be more positive in their relationship in addition to staying fit. She maintained,

“Fitness has had a positive effect on our relationship because it is a common interest that we both feel very passionate about. We work out together, and that allows us to spend much more quality time together.”

Although the duo never revealed when the two exactly began dating, judging by their throwback public appearances, it is safe to say they began their lovey-dovey in the early 2010s.

Later on, the couple was spotted together on several other occasions. In early 2016, they stepped out to attend the New Era Style Lounge, in San Francisco, California.

The couple got engaged back in 2016. Katy also wrote on her Twitter bio, “fiancé to #84,” which is Shannon’s old jersey number. But now, the fitness enthusiast has kept her social media handles private.

Despite their romance, the two didn’t last long. They went on their separate ways after dating for several years. What was the reason behind their split? You’ll be shocked to find out!

Katy Kellner Got Pregnant By Another Black Guy

Everything was going well between Katy and Shannon until shocking news of Katy getting pregnant by an unknown person made headlines in 2018. When the fitness guru shared a photo of her baby bump on Insta, fans initially didn’t have any idea that Shannon isn’t the baby’s father. And they also congratulated Sharpe on his then supposed to be new fatherhood.

But afterward, it was revealed that the baby’s father is none other than former baseball outfielder, Marlon Byrd. Here is the post,

Soon, the dust settled down and since then Katy and Marlon are leading a great life. They even became a parent fo the second time when Kellner gave birth to their son named, Jaden in December 2018.

Does Shannon Sharpe Have Kids?

He has three children. All of his kids are college graduates. His oldest daughter Kayla attended Georgia Southern University, in Statesboro to study pre-law.

His younger daughter Kaley enrolled at Florida State University, in Tallahassee with the aim of becoming a medical examiner. He also has a son named, Kiari who studied both biology and business management at Georgia Southern University. The identity of his kids’s biological mom is still not known.

Did Shannon Sharpe had a Thing with Nicole Murphy?

When Shannon was still in a relationship with his former fiancee Katy, the TV presenter also seemed a little obsessed with the model Nicole Murphy. In fact, in August 2017, he even tweeted gesturing his desire for Nicole,

The model replied to the tweet with a funny response, a few days later. She wrote,

He subsequently made many other tweets about her. In November, Shannon also shared a photo with his desired girl from the gym.

Although Sharpe and Nicole had some interesting interactions over Tweet, they never came out as a couple.

Who Is Katy Kellner? Detailes on Shannon Sharpe’s Rumored Wife