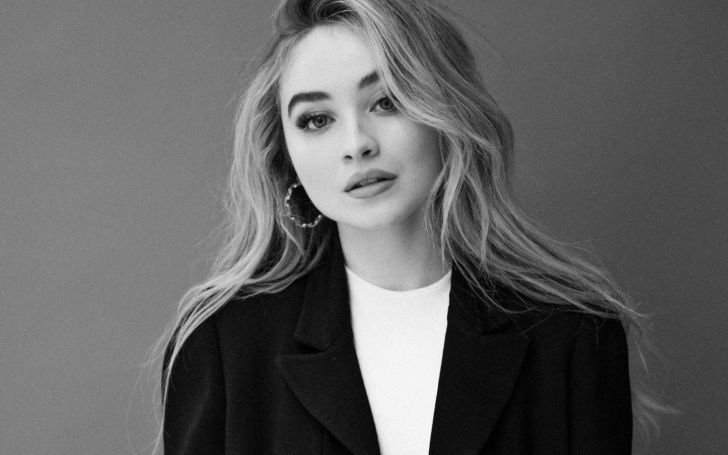 Sabrina Carpenter is known for her both singing and acting prowess. The multi-talented superstar is famous for her role in Girl Meets the World and Tall Girl. Apart from her acting credits, she has released several hit singles including Almost Love and Eyes Wide Open.

Now talking about her dating life, many of you are curious as to who is Sabrina Carpenter’s boyfriend in 2021? Well, she was relishing a happy relationship with her boyfriend, Griffin Gluck but they have broken up. What was the reason behind their split?

Today let’s take a look at her relationship status and find out who is she dating now?

Who is Sabrina Carpenter Boyfriend? Is it, Griffin Gluck?

One of the sought-after singers of the current generation, Sabrina Carpenter’s relationship status is something many people want to know.

Though Carpenter remains vigilant when it comes to her dating life, she has, on a few occasions, openly professed her love. Just recently, she was linked with fellow actor Griffin, but reports suggest the two have broken up.

Post split, Sabrina is not linked with anyone as of 2021. What’s more, these days she is sharing a lot of raunchy pictures, probably showing some people what they’re missing out on.

Well, good news for those who somehow dream of taking this wonderful and gorgeous actress on a date.

In the section below, let’s talk about her past love affair with actor Griffin and what was the reason behind their split?

For a couple of months in 2020, Sabrina was in a delightful relationship with the actor, Griffin Gluck.

Her ex-boyfriend is an acclaimed actor known for his work in Big Time Adolescence and Tall Girl. Meanwhile, the pair apparently worked in the Netflix movie, Tall Girl.

When and how did Sabrina & Griffin start Dating?

Sabrina rarely talks about her dating life in public because of which it is quite difficult to find out the precise date of their unification. That being said, we might have some idea as to when did they actually started going out.

According to eagle-eyed fans, the lovebirds started dating in late 2019. Last year in December, the duo was spotted spending some cozy time on a Lunch date at Studio City, CA. It sounds as if though the duo got attracted to one another while filming, Tall Girl.

What’s more, in many of their interviews together, both of them looked smitten. Her fandom even created a video titled, ‘Sabrina Carpenter and Griffin Gluck Being Cute for 4 minutes and 8 seconds.’

There was definitely a chemistry between the pair, don’t you think?!

Sabrina even supported her then-boyfriend Griffin during his movie premiere

On March 6th, 2020, Sabrina and her former beau showed up at the premiere of his movie, Big Time Adolescence. At the event, both of them came in separately but later posed for some cute snaps together.

The event took place in New York where the songstress was rehearsing for her Broadway musical debut, Mean Girls.

It might come as a bit of shock for many but yes, in early 2020, social media called out Griffin for his past behavior. Numerous internet users claimed the 19-year-old actor is Racist and Transphobic.

Social media goers scoured many of the posts Griffin liked or shared. The posts directly suggested that he is indeed what people claiming him to be. Take a look at some posts shared by the user, @gracefulbrina.

you guys defended this man by saying he’s changed. this is his humor as of this year. you asked why we were calling him out. people like him are idolized by millions, and problematic behaviors should be called out for anyone, especially those in the limelight. more in thread. pic.twitter.com/d7Mk2lSWK3

This certainly tells a lot about the type of mentality Griffin has, right!

However, Sabrina doesn’t think so and defended her beau by saying one shouldn’t judge a person by their past. She wrote a huge message on her Twitter account. See it for yourself!

We all know that everyone has their blunder years in the past so judging them by their past isn’t great either.

However, all of these posts are as recent as it gets. You can now decide whether to call him a Racist & Transphobic or not!

Sabrina and Griffin Split: Why did they broke-up?

Just like any other relationship in showbiz, Sabrina’s romance with Griffin also came to an end. In August of 2020, a rep for Carpenter has officially stated she has broken up with her beau.

The main reason behind their separation wasn’t revealed. We can say, they had some differences and eventually decided to go their separate ways.

Sabrina was linked with several of her co-stars and a fellow singer. Back in 2017, during the iHeart Radio Awards, Canadian singer Shawn Mendes was spotted hugging Sabrina. Instantly, the internet shipped the duo.

For a few months, the rumor went on like wildfire before the Looking At Me singer put the rumors to rest. In an interview with Clevver News, she revealed they are not dating.

Apart from this, Sabrina had a run with actor, Bradley Steven Perry. It was back in 2014 when they first started dating. As told by Carpenter herself, her then-boyfriend asked her to be his girlfriend in a unique way.

Apparently, Brad put in a note inside a bottle and asked her out. Sabrina said,

“[It was a] really unique way to ask someone out. [It was] like the pirate movies, like they do the little bottles and they put notes in them and send them across the ocean, like one of those, and [he] put a note inside. It was cute.”

Sadly, the cutest couple had to suffer a break-up and they got separated for good in late December 2015. There wasn’t any official confirmation, albeit, some social media instances pointed out they broke up.

Apart from this, there were speculations Sabrina also dated actor Corey Fogelmanis. Nevertheless, she openly admitted they are just good friends and nothing else.

Besides, she was also linked with Riverdale star, Casey Cott. News of their budding romance came to after Casey appeared as her love interest in her music video, Why.

Later on, it turned out, the duo is good friends and nothing more than that. Moreover, Casey is happily engaged to his girlfriend of a few years.

Who Is Corey Fogelmanis? Things You Should Know