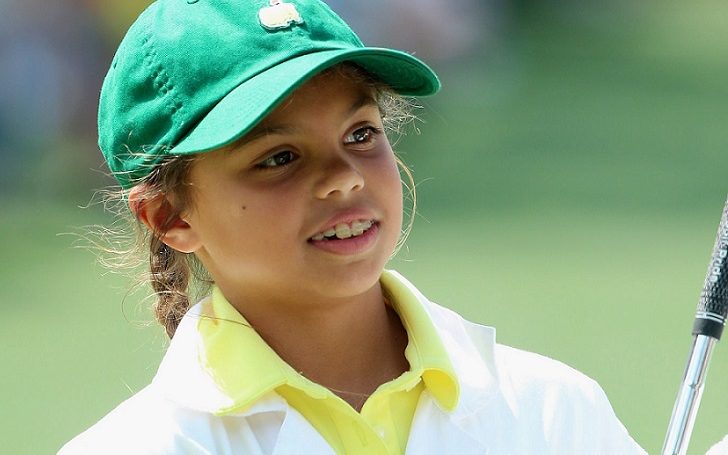 Sam Alexis Woods is a popular celebrity kid who has been in the spotlight as the daughter of golf icon Tiger Woods. Sam’s father started making quite a name for himself by the age of 21 winning the 1997 Masters by a record 12 strokes. Woods is now regarded as one of the greatest golfers of all time, holding numerous golf records to his name.

Besides, Tiger is also a doting dad of two kids. He is now co-parenting his two children with his ex-wife Elin Nordegren.

But, being the daughter of such a renowned father, is Sam also following in her father’s golfing footsteps or does the teen girl have other plans? Let’s find out more about Tiger Woods’ daughter’s life including her affluent childhood, siblings, parents’ failed marriage, and more.

Sam Alexis Woods was born the day after Father’s Day

Besides, Woods belongs to American nationality and has a mixed ethnical background.

Her name ‘Sam’ was given in honor of Her late grandfather

Sam isn’t her nickname but it has been inspired by Tiger’s late dad Earl Woods, a former US Army infantry officer. Tiger disclosed that his dad used to call him Sam. Thus, they decided the name would be meaningful. Her middle name Alexis represents a Helper and Defender.

Sam Woods Has a Younger Brother

Woods grew up along with her younger brother Charlie Axel Woods, born on 8th Feb 2009. He has also been following in his father’s footsteps. Back in June 2016, Charlie tied for second in a U.S. Kids Golf Boys 7 event.

He also appeared in a junior golf event in South Florida, where his dad was seen caddying for him. Although the celebrity kid didn’t end up winning, his impressive swing and advanced prowess at such an early age gained him a lot of positive comments on social media.

Unlike her little brother Charlie, Sam Alexis Woods, 14, has yet to show interest in golf. Besides, she and her brother have a keen interest in soccer. Tiger told in an interview with Golf.com, “They’re keen into soccer. If they want to play golf, that’s great. If they don’t, that’s fine, too. As long as they have a good time playing sports.”

They also attended several major soccer tournaments with their dad.

Sam and Charlie are also Joined by a step-sibling

They both have a step-sibling; a brother named Arthur Nordegren Cameron from their mother’s relationship with NFL player Jordan Cameron. The baby boy was born in October 2019.

Tiger Woods and former Swedish model Elin Nordegren tied the knot in October 2004, at the Sandy Lane resort in Barbados. Swedish golfer Jesper Parnevik first introduced the couple during The Open Championship in 2001.

They got engaged in November 2004 and the following year, the two walked down the aisle. However, their marriage couldn’t last long which attracted huge media attention after the golfer’s cheating scandal infamously went viral in 2009. They finalized their divorce in August 2010.

“My relationship with Tiger is centered around our children and we are doing really good — we really are — and I am so happy that is the case. He is a great father,” she told People magazine.

Tiger has an estimated net worth of $800 million while his wife Elin Nordegren possesses a net worth of $200 million, as of 2021. Shortly after their divorce finalization, Elin went on to spend $12 million on a North Palm Beach house, in Florida. She later demolished the 1920s home for renovation purposes. Its complete remodeling was finished in 2014.

The property hit the market when the model listed it for sale with an asking price of $48.5 million in 2018. On the other side, Tiger also owns a $48.09 million mansion on Florida’s Jupiter Island.

It features a 100ft swimming pool, a basketball area as well as a tennis court.

Sam is a Dog Lover

Sam loves to be around her old man’s puppies. The Woods siblings frequently appear, enjoying their quality time with three pooches owned by their dad.

Is not active on Social Media

Furthermore, Sam has been spotted several times with her dad watching golf matches.

Does Sam Alexis Woods Have a Boyfriend?

Woods, 14, is not dating anyone officially at present. She is too secretive when it comes to her love life and has never given a single hint whether the star kid does have a boyfriend or not.

Who is Elsie Otter Pechenik? Everything about Zooey Deschanel’s First Child