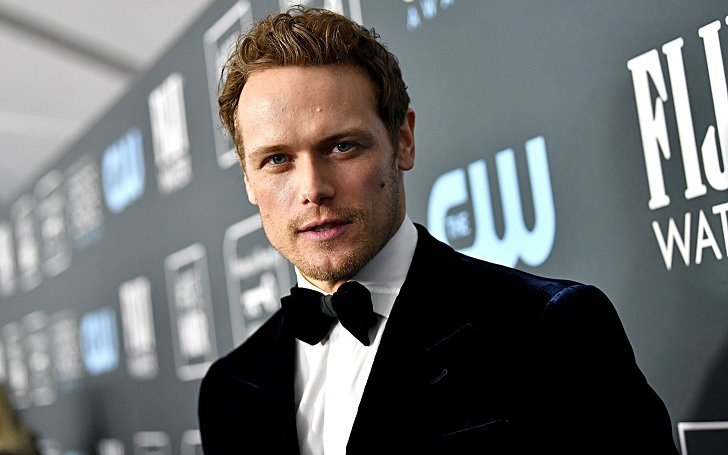 Scottish actor Sam Heughan grabbed huge popularity with the lead role of Jamie Fraser in the Starz series Outlander. He also became one of the most romantic characters on TV for his burning romance with his fictional wife Jamie Fraser.

Besides his professional accomplishments, Heughan is also notable for his humanitarian role. He is the founder of the charitable organization My Peak Challenge.

Who Are Sam Heughan Parents?

Sam Heughan was born in Balmaclellan, in the historical county of Kirkcudbrightshire, in Scotland, on 30th April 1980 to Scottish parents. His mother Chrissie Heughan is an artist as well as a papermaker based in Edinburgh.

While talking about his father, he left his family when Sam was quite young. His mother later nurtured him and his older brother Cirdan Heughan as a single parent.

Their doting mom also did a series of dead-end jobs to handle the family’s financial condition. Sam is lucky to have such a loving and caring mother.

The name of Sam Heughan’s dad is still a little bit unclear. Sources suggest that his father lived on an island in Canada after he left the family.

He went home in 2015 which was really an awesome moment for the Heughan family. But, shortly after their reunion, Sam’s father, sadly, passed away due to Leukemia.

Heughan grew up with his older brother Cirdan Heughan. Unlike his brother, Cirdan is less popular on the media. He is leading a successful marital life with his wife Victoria Heughan for years now.

In 2008, Sam’s brother Cirdan was diagnosed with testicular cancer. She has since supported several charity projects that help cancer victims.

A Sword Lover since Childhood

Sam Heughan was an avid sword lover from an early age. He spent the majority of his childhood running around with a pretend sword. He once said,

Heughan is a Royal Scottish Academy of Music and Drama Graduate

Sam Heughan moved to New Galloway with his family at age five. There he attended Kells Primary School until they shifted to Edinburgh. He later studied at James Gillespie’s High School for a year and then enrolled at Edinburgh Rudolf Steiner School.

Upon his graduation, Heughan spent his next couple of years working and traveling to several places. He eventually attended the Royal Scottish Academy of Music and Drama in Glasgow and graduated in 2003.

During his school and college days, Sam Heughan appeared in various productions like The Twits at Citizens Theatre. His other theater credits are Anton Chekhov’s The Seagull and Aeschylus’s Greek tragedy Prometheus Bound.

The actor also performed in Shakespeare’s Romeo and Juliet. Furthermore, Sam along with three other RSAMD pupils represented the school at the BBC Carlton Hobbs radio talent competition a year before his graduation in 2003.

Heughan got the Laurence Olivier Award for Most Promising Performer for his work in the play Outlying Islands.

Sam Heughan Movies and TV Shows: Made Debut with ‘Island at War’

He landed his first TV role appearing in the miniseries Island at War in 2004.  He gradually took part in many other successful TV projects like River City (2005), Midsomer Murders (2007), Party Animals (2007), and more.

In 2019, the actor played Scott Nielson on the BBC One TV series Doctors. A year after, Sam appeared in First Light and Any Human Heart.

He is famous for His role in ‘Outlander’

Sam Heughan’s biggest break came when the actor got the lead role on the critically acclaimed Straz series Outlander in 2014. He played Jamie Fraser, a husband of Claire Fraser (played by Caitriona Balfe).

The Frasers of the Ridge are here! Here’s your first peek at Season 5. Ageing like a fine…? WHISKY!?😜 #Outlander #STARZ

Along with rave reviews, the actor has also won a number of prestigious accolades. So far, he has won TV Guide Awards, EWwy Awards, and People’s Choice Awards.

Besides, Sam is also credited for his roles on big-screen such as The Spy Who Dumped Me (2018) and Bloodshot (2020). His upcoming films include SAS: Red Notice and An Unquiet Life.

Is an Active Philanthropist

In addition to his film and TV works, Sam Heughan is also known for his exemplary charity efforts. He launched his charitable foundation My Peak Challenge in 2015. The training and nutrition program helps the participants to pursue their personal goals.

Sam also worked as a patron for Youth Theatre Arts Scotland back in August 2014.

The actor also teamed up with several philanthropic organizations to raise funds for cancer research. As his father died from the same disease and his older brother was also diagnosed with Cancer, Sam wants to help out other victims.

In the year 2019, Heughan partnered with Omaze and generated nearly $3 million for Bloodwise UK. A year before, the Outlander star participated in both the Stirling and EMF Edinburgh Marathons. And he raised £38,224 for Cahonas Scotland and their Testicular Cancer Education and Awareness Programme.

In June 2019, the University of Stirling also awarded Heughan with an honorary degree “in recognition of his outstanding contribution to acting and charitable endeavors”.

What About Sam Heughan Love Life? If He Dating Anyone?

The 41-year-old Sam Heughan is yet to be married, but, the actor previously dated several well-known celebs  although his relationship status is empty as of 2021.

Sources reported he once romantically linked to then-budding actress Amy Shiels. But the two never went to the public with their relationship.

Furthermore, Heughan dated MacKenzie Mauzy, an actress back in late 2015. The former couple first came across at the industry event.

In October 2015, the two also celebrated Mauzy’s birthday together. The former flames kept their romance away from the spotlight and it is still quite a mystery when actually they split.

Sam Heughan opened up about Bullying

In April of 2020, Sam took to his Twitter to reveal all the bullying and harassment he and his castmates have faced, ever since they worked in the series, Outlander.

Since the series premiered back in 2014, the whole cast member has faced verbal abuse, defamation, shaming, and stalking. All because the Outlander fandom is a little too crazy for the show.

He posted a four-part note, discussing all that he has faced till now and that he has had enough.

What is Sam Heughan Net Worth?

Heughan has made quite a good fortune from his work in both movies and TV shows. As per some sources, the actor has $5 million net worth in 2021.

Is Sam Heughan Married? Who is His Wife? His Detailed Love Story

Who is Sam Heughan Girlfriend 2021? All About His Dating Life

Who Is Outlander star Caitriona Balfe? Grew up with several siblings