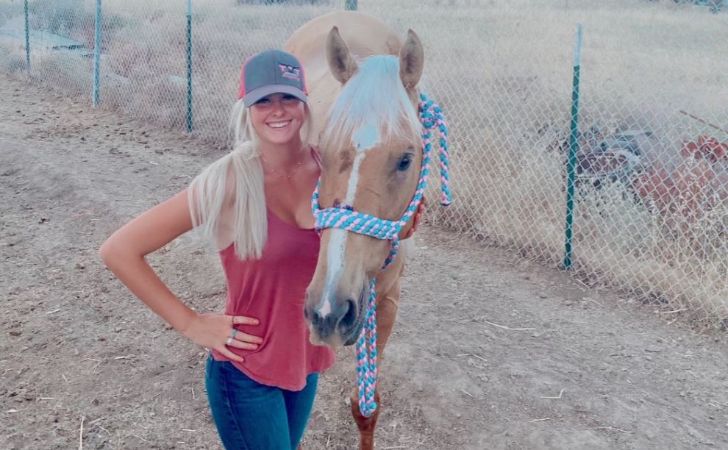 Samantha Hagar is most popular as the daughter of American singer and songwriter Sammy Hagar. Unlike her father, she is not into singing but she is quite inclined towards acting. In fact, she has already appeared in a few reality TV series along with her mother, one being Oprah: Where Are They Now?

She is the youngest daughter of Sammy and his wife Kari Karti. So, how is her relationship with her parents?  Further, there are a lot of queries surrounding her love affairs and relationship. Well, does she have any boyfriends?

If you want to know the answers to all these questions, be with us.

Samantha Hagar Is The Youngest Child Of Singer Sammy Hagar

The youngest daughter of a successful singer Samantha Hagar was born on March 24, 2001. At present, she is 21 years of age. She is one of two daughters of Sammy Hagar born from his second marriage with Kari Karte. Her birth name is Samantha Pastel Hagar.

She shares a great relationship with both her parents. Besides, she also has four siblings with who she shares a great bonding. While Kama Hagar is her biological sister, she has two step-brothers Andrew and Aaron who were born from her father’s first marriage with Betsy Berardi.

Well, she not only is close to her sister the Kama but also her step-brothers. Back in 2020, on the occasion of her birthday, Andrew came up with her beautiful post on his Instagram wishing her little sister her birthday. Check out her post here.

Like we mentioned earlier, her father has married twice. His first marriage was with Betsy Berardi. They tied the knot on November 3, 1968. But after being married for over 26, they divorce in 1994. The former couple had separated way earlier in December 1991, soon after Sammy met his now-wife Kari.

Samantha’s father married for the second time to Kari Karte, her mother on November 29, 1995. Well, the two are leading a beautiful relationship as a couple. Wish them years of togetherness.

Samantha Hagar Is Into Horse Riding

Not many know, but Samatha has an unusual love for horse riding. In fact, she has already started taking part in barrel racing with her horse. Back in June 2020, she ran an 18.6 barrel race with her horse Tequila. Unfortunately, she did not win the race, but it does explain her love for racing.

Well, her father Sammy too made a post on his Twitter proudly addressing her daughter’s love for racing. He posted a beautiful phot of him along with his daughter and her horse, and in the caption, he wrote,

My beautiful 19 yr old daughter Samantha and her man Tequila just ran an 18.6 barrel race. Didn’t place 1st, but she did in my heart.

My beautiful 19 yr old daughter Samantha and her man Tequila just ran an 18.6 barrel race. Didn’t place 1st, but she did in my heart. #daughters #horses #boots #saddles pic.twitter.com/4ZdL8v0xSr

Just in case you are curious, Samantha’s love for horses did not begin just recently. She is rather into it since she was a kid. Here is the photo of her with her horse as a kid.

She has come a long way and it looks like she is all ready to pursue horse riding as a career.

She has appeared in an episode of the talk show “Oprah: Where Are They Now?”, in 2016. Likewise, in 2019, she appeared in the musical TV series Rock & Roll Road Trip with Sammy Hagar. The series also stars her father and her mother.

Since 2019, she has not been a part of any TV or movie projects. But we hope to see her play more roles.

Is Samantha Hagar Married Or Dating a Boyfriend?

Well, she is definitely not married at present. But when it comes to her love affair, things are not very clear. So far, there have been no reports of her romantic relationships. Apparently, she is not dating a boyfriend at present. But since she is a very private person, it is highly possible that she is seeing some secretly.

However, considering the fact that there are no official details on her relationship status, it is safe to say she is single in 2021. That said, we would love to see her with a man of her choice.

Unlike most of the star kids, Samantha is not very much into social media. She is on Instagram with over 1k followers. However, she has kept it private. Likewise, she is also on Facebook but she has not been active on the platform since March of 2014.