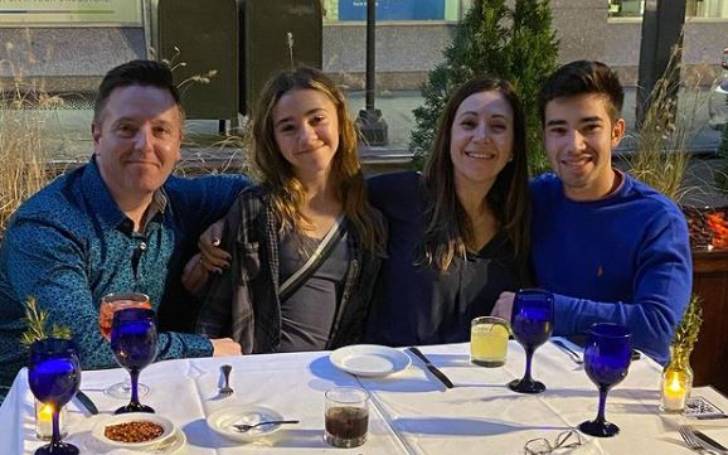 Sandra Edward McGee is famous as the wife of an American TV personality and self-proclaimed psychic, John Edward McGee Jr. Her husband became a country-wide sensation for his show, Crossing Over with John Edward.

Sandra’s hubby is one of the most controversial figures on TV. Ever since his show hit the screen, he quickly gained prominence along with some criticism as well. Despite all the notoriety, John enjoys a great marital life with his wife, Sandra.

Here today we’re going to find out many aspects of their married life. We will find answers to questions including how and when did they meet? How many children do they share? and what is John Edward’s wife’ Sandra Edward McGee’ profession?

She was born on July 26th, 1971, in the United States. The information about her parents is not available. Sandra belongs to the Portuguese ethnicity and has American nationality. Sandra is multi-lingual and is fluent in English and Portuguese.

Her parents raised her in the state of New York from where she also finished her formal education. Throughout her childhood, Sandra was an enthusiastic kid. She got involved in dancing from early on and later down the line, she would meet the love of her life through her passion.

What does Sandra Edward do for a living?

At the time of her meeting with her husband, she was working as a dance instructor in New York City. She worked as the dance instructor for a number of years before calling it quits. As of now, she is not involved in any particular profession.

However, she has a more important job at home. In an interview with Daily Telegraph, while fondly talking about his wife, he said, “She keeps everything together. She’s on the job.”

In addition, John also mentioned how Sandra takes care of the kids back home while he is constantly on the road.

In the early 1990s, while working as a dancing instructor at a local dancing center, Sandra first came across John. Coincidentally, she was John’s ballroom dance partner back when he was trying to make it big in dancing. Many of you might not know that before turning into a TV personality, John was a competitive dancer. And yes you guessed it, Sandra was his instructor.

After working together for some time, Sandra and John eventually fell in love with each other. Subsequently, they started dating and before you know it, got married.

When did Sandra Edward marry her husband John Edward?

Right after they started dating, the couple tied the knot in an intimate ceremony in the year 1995. Many of their closest friends and family were in attendance. John rarely talks about his private life so this is why there isn’t much information available about their life.

Be that as it may, one thing is for certain, the couple lives a fairly fruitful life. Till now, we are yet to hear about any problems in their conjugal life.

Sandra is a mother of two children

From their decades worth of married relationship, Sandra and John became parents of two kids, one daughter, and one son. She gave birth to her son, Justin on September 25th, 2002. At the time of his birth, he weighed 10 pounds.

A couple of years after the birth of their first child, Sandra became a mother of a daughter named Olivia Gabrielle on January 25th, 2007.

Meanwhile, the older one, Justin, doesn’t seem to have a social media account. In the same token, Sandra is also active on Instagram but she has a private account. She goes by the username @sacoleo71.

Well, the family of four is enjoying themselves. They are exceptionally close to one another. Safe to say, Sandra and John have done good in the parenting department.

Who Is Clytie Lane? All The Facts About Nick Nolte’s Wife