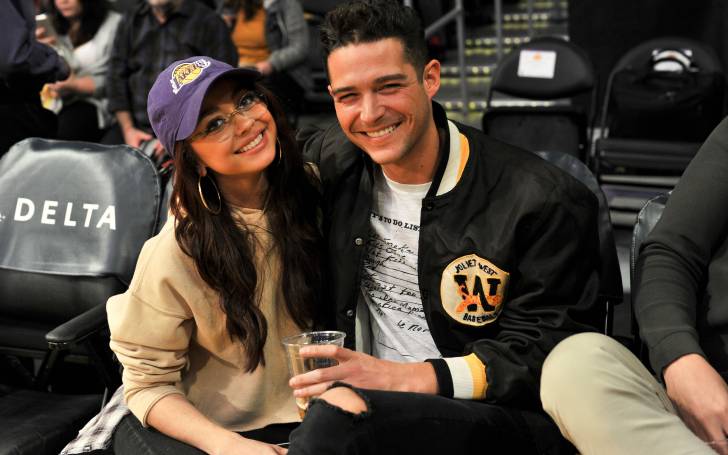 Ever since the engagement, Sarah Hyland and Wells Adams have been teasing fans regarding their upcoming wedding. There are a lot of rumors the lovebirds will tie the knot in the summer of 2020, but it seems unlikely, as of now.

With Coronavirus/COVID-19 wrecking havoc all around the world and the USA facing the full brunt of it, it’s highly likely Sarah and Adams’s wedding wouldn’t happen this summer.

After the engagement, marriage is always in cards and so it is for Sarah and Wells. Since getting engaged in June of 2019, everyone is curious about Sarah and Wells’s big day.

With all the teasing the duo has done so far, it looks like the duo might just have a superb summer wedding. Likewise, fans are also keen to watch their favorite couple become officially husband and wife.

Since last year, judging by Sarah’s posts, she is doing nothing but preparing for her upcoming wedding. Last year in November 2019, she revealed all the ladies who will serve as bridesmaids on her big day. The majority of them are her non-celeb friends and the minorities are actresses Vanessa Hudgens, Ashley Newbrough, and Ciara Robinson.

Similarly, a few months later, she shared a story on her Instagram account in which the Modern Family star is seen working out. You might say, what is so revealing about working out, well, hold on, just a moment!

The actress wrote in the story, “Prep for a secret shoot next week!…but let’s be real. The end goal is wedding body ready…”

Meanwhile, Adams’s friend Chris Harrison asked him if he could officiate the wedding. Adams outright turned him down by saying,

“I want him to just have fun and have a good time and not have to be burned by any of that stuff. He was nice enough to offer, but I wouldn’t do that. He’s my friend. I don’t want him to have to work at my wedding.”

We can all speculate as much as can but have to wait until and unless the duo themself reveal the date and venue. Even if the lovebirds had planned for a summer wedding this year, it looks like it’ll be postponed due to COVID-19.

Sarah posted a photo with her boyfriend-turned-fiance Well Adams celebrating their would-be wedding day on August 8. Even though their big day had been postponed by the Corona, the couple still remains positive about their marriage.

“A couple, a pandemic, & a postponed wedding: A series,” she wrote on her Instagram post, “We were supposed to get married today. Instead… we took pictures and drank wine. I love you to Pluto & back @wellsadams.”

Many of you might’ve already known that since the whole country has been locked down due to the Coronavirus Pandemic, the divorce rate and domestic abuse cases have risen exponentially.

However, for Wells and his fiancee, Sarah, their relationship only grew stronger. While promoting the new season of Worst Cooks in America, talking about his marriage decision, Adams told US Weekly,

“If anything it’s, like, reconfirmed that I made a good decision. I mean, it’s obviously been — this whole thing has been scary and anxiety-ridden just because you don’t know the future — but it’s been nice spending a lot of time with her.”

What’s more, he also maintained that regardless of what is happening in the world right now, Wells is trying to remain positive and silver lining the whole thing. He divulged that if there wasn’t any lockdown right then he’d be busy shooting with different projects and won’t be spending time with his girlfriend.

In addition, he also felt the whole circumstance is like a big test for the pair to find out if they are meant to tie the knot or not.

Sarah Hyland and Wells Adams Engagement: Met via the Internet

Sarah announced that she is engaged to be married to Wells in July 2019. During their private getaway to an Island which looked like a Paradise, Wells popped the big question.

The Bachelor in Paradise star gave her a white 5-karat oval cut ring from Lorraine Schwartz. The ring costs a staggering $200,000.

Initially, the couple first met virtually when they started flirting on Twitter. Sarah expressed her attraction towards Wells since he appeared as a Bartender in The Bachelorette, 2016.

Then in 2017, they sparked romance rumor after going to a Halloween party together, dressed up in the Stranger Things theme. Eventually, the pair confirmed their romance in November 2017.

During her appearance at Jimmy Kimmel Live, Sarah said Wells slid into her DMs and that is when they started dating.

She maintained, “Have you seen those memes of ‘Slide Into the DMs’? That. He slid into my DMs. The bold move worked. I was single, obviously, and was like, ‘This is really awesome. You’re being very forward and it’s sexy and not aggressive, but very confident and sexy,’ and I liked that.”

Then the next year, the lovebirds moved in together in Los Angeles. Wells relocated from Nashville to Los Angeles.